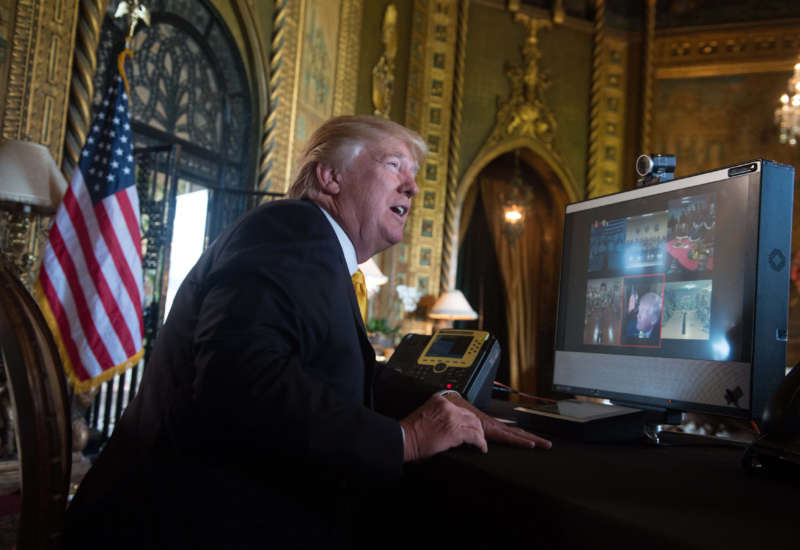 Have you enjoyed the quiet? I hope so, because it might be over. According to a report in Tuesday’s Washington Post, a cobbled clutch of “experts” from Facebook that calls itself the “Oversight Board” will soon decide whether or not to let Donald Trump back on the platform. This Board, which the Post says is “a less than one-year-old body that describes itself as an ‘experiment’ in the regulation of online speech,” will render its decision on Wednesday.

Once settled, this decision will likely set the bar for what constitutes the acceptable-to-corporate-ownership boundaries of permissible free speech on social media, and will likewise be the precedent for how world leaders are treated by Facebook and other platforms going forward.

There is every possibility that tomorrow will return us to the Age of Bad Noise. If the Board sides with power over common sense, Trump (along a whole lot of other tinpot autocrats) can continue polluting our minds with paranoid ranting on free social media, and the hapless press will, of course, amplify their every bent thought and twisted accusation. Why? Because, as ever, it’s good television.

It is difficult to quantify the damage done by Trump’s flagrant misuse of social media platforms like Facebook and Twitter (and God help us if Twitter ever lets him back in). Here was a leader bereft of morals and out for blood, able at any moment in the day to slather the political discussion with lies, threats, complaints and vapid declarations of victory. Even now, I remember how hard it was to navigate the signal-to-noise ratio on a busy Trump Twitter day. It was like trying to collect a thought in the middle of a rock storm.

The din may have felt new to us when the Trump era hit, but in one pointed way, the former president’s use of social media to confound and unhinge the national discourse is one of the oldest tricks in the book. Specifically, it is a tactic long used by fascists seeking to gain and hold power. The idea is not to debate, but to damage debate beyond repair so that even the simplest facts are open to question. In such a muddled, confused environment, fascism can flourish.

What is fascism, besides being a serious word not to be bandied about lightly? Nazi fascism was its own specific ethos, outlined in excruciating detail by Adolf Hitler in Mein Kampf. In Italy, Benito Mussolini’s concept of fascism was captured in the Treccani Encyclopedia. In Spain, fascist leader Francisco Franco had his own ideas on fascist Catholicism, and fascists in the U.S. have spent decades attempting to unite their ideology with splinter Evangelical Christianity.

Is there a collective definition for fascism amid all these varieties, and if so, do Donald Trump and “Trumpism” fall into that spectrum? Celebrated author Umberto Eco, himself a survivor of European fascism, endeavored to create precisely that sort of collective definition, which he called “ur-Fascism” in a 1995 essay for The New York Review of Books.

Is there a collective definition for fascism, and if so, does Donald Trump and “Trumpism” fall into that spectrum?

“Fascism was philosophically out of joint, but emotionally it was firmly fastened to some archetypal foundations,” he wrote. “But in spite of this fuzziness, I think it is possible to outline a list of features that are typical of what I would like to call Ur-Fascism, or Eternal Fascism. These features cannot be organized into a system; many of them contradict each other, and are also typical of other kinds of despotism or fanaticism. But it is enough that one of them be present to allow fascism to coagulate around it.”

Eco fashioned 14 “features” of ur-Fascism to explain the overall phenomenon. The first of these is a fanatical adherence to tradition, something Trump used to create his entire political persona: I will bring us back to better days, when people respected and honored all the things you believe in.

The second feature is a rejection of modernism, which again has become a staple of current Republican groupthink. This new world is happening too fast, too many people are getting rights they shouldn’t have. Modernism is the death of tradition, a fact Trump has used to great effect.

The third feature, irrationalism, preaches action for action’s sake, thoughtless, heedless, bereft of self-awareness. “Action being beautiful in itself, it must be taken before, or without, any previous reflection,” writes Eco. “Thinking is a form of emasculation.” You tell me who you think that sounds like.

The fourth feature is the complete dismissal of analytical criticism. One does not question the leader, the party, or the actions that have been taken. “For ur-Fascism,” writes Eco, “disagreement is treason.” That line may as well have been at the top of the 2020 Republican platform, had they bothered to make one.

The fifth feature is a radical hatred of diversity. Fascism requires rigid adherence to a basic way of being, a code, a slate of honored traditions. Outsiders are to be feared and shunned in the quest to create a perfectly homogenized society. “Thus,” writes Eco, “Fascism is racist by definition.” See: Trump’s border and immigration policies.

The sixth feature states that ur-Fascism derives its power from individual or social frustration. This perhaps more than the others, is the hallmark of Trumpism, the iron spine of its power and influence. Millions of people who feel left behind in this rapidly changing world grapple with fear and fury, and Trump taps that aquifer with a deftly swung sledgehammer.

Six features in, and we have checked every box with a heavy marker. The other features — loud nationalism, jealousy of the enemy, a permanent state of conflict, disdain for elites and elitism, the championing of the masculine, a populism that preaches rights only for the righteous few, and the creation of a new vocabulary that stifles complex and critical reasoning — are all straight out of the Trumpian playbook. Umberto Eco seems to have seen Donald Trump coming for 20 years.

If Trump is allowed back on Facebook, he will again pursue an aggressive campaign of chaos aimed at disrupting the essential workings of democracy to his own ends, and he already has a devoted mass following.

The Facebook “Board” should let the silence rule a while longer. Trump and his followers aren’t here to talk, or to share, or even to lead. They are here to break things, as evidenced on January 6. Don’t let them.