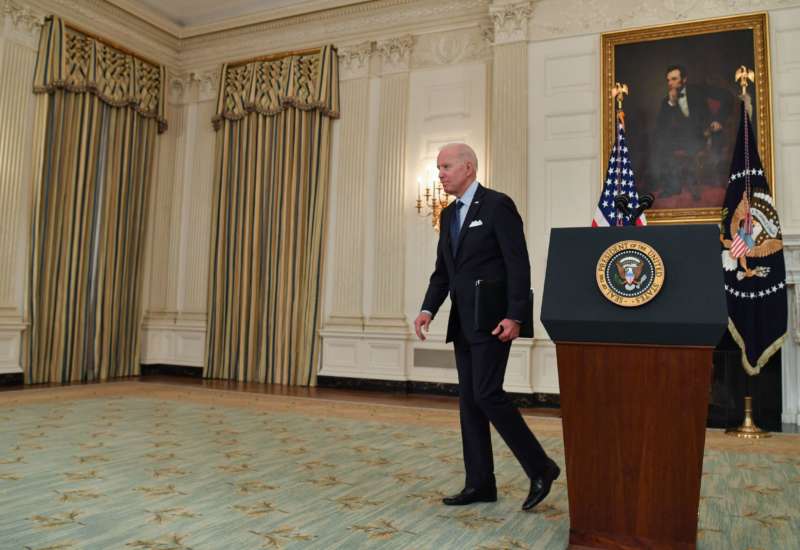 Earlier this week, President Biden, under pressure from his own voter base, executed what might end up being the most consequential political U-turn of his presidency.

Having disappointed refugee rights advocates and the progressive wing of the Democratic Party a few weeks ago by adhering to Trump’s limit of 15,000 refugee admissions this fiscal year, on Monday Biden announced he was raising that cap to 62,500. It was the right decision to make, even if it took him nearly three weeks to get there.

Meanwhile, it remains to be seen how many refugees will actually be admitted in practice. Even as he raised the cap, Biden warned, “The sad truth is that we will not achieve 62,500 admissions this year,” due to how badly the system for processing refugees was dismantled and drained of staff under Trump.

Nevertheless, successfully pressuring Biden to ditch Trump’s restrictive policy is still a hugely important win for progressives. After Biden opportunistically decided to keep the low cap that he had inherited, an array of luminaries on the left of the political spectrum, as well as decided moderates such as Sen. Dick Durbin, called Biden out for betraying a campaign promise and, more importantly, squandering the trust of refugees who, after years of waiting in camps for the required visas and entry documents, were finally preparing for their journeys to the U.S.

This one ought to have been a no-brainer. There never was a morally cogent reason to eviscerate the refugee resettlement program in the way that Trump and his team did. It was always about nativism, and, more particularly, about raw Islamophobia. It was against Muslim-majority countries such as Syria and Yemen, Somalia and Iran, that Trump turned most of his animus, blocking refugees — many of whom are fleeing particularly brutal and long-lasting civil conflicts — from those locales, not only via low caps on the total numbers admitted, but also via executive orders specifically denying entry to people from those individual countries.

Trump used Congress member Ilhan Omar, who arrived in the U.S. from Somalia as a child refugee, as a foil in speech after speech, attacking her in the most incendiary of language, urging his people to turn against refugee-welcoming cities such as Minneapolis, and encouraging his audiences to chant “send her back” after he had riled them up against her.

It remains to be seen how many refugees will actually be admitted in practice.

Biden has consistently opposed Trump’s policies on refugees and on the Muslim travel ban. In fact, when candidate Trump first unveiled, in a short speech to his doting followers in late 2015, his desire to ban Muslims from entering the country “until our country’s representatives can figure out what the hell is going on,” and followed up early in the new year with a TV ad touting this vile plan, Biden said Trump’s language was “dangerous.” Meanwhile the White House, at which Biden was at the time the vice president, released a statement asserting that Trump’s proposal “disqualified” him from holding high office.

On the campaign trail, Biden consistently called the Trump administration out for its evisceration of the U.S.’s refugee resettlement program — between January 2017 and the fall of 2019, the Trump administration admitted fewer refugees than the Obama White House did just in its last year in office. And during the pandemic, refugee admissions all but ground to a halt. Biden promised, as I wrote back in April, to reverse this trend: to rapidly raise the refugee cap to 62,500 this year, and shortly thereafter to 125,000.

All of this made his decision last month to uphold Trump’s 15,000 cap on refugee admissions this fiscal year particularly perplexing. It was a decision seemingly made in fear about the political blowback his administration was facing from the right over the high numbers of people seeking to claim asylum on the country’s southern border.

Seven in ten Americans say undocumented residents should be offered a viable path to legal residency.

While much of the country’s immigration policies can only be legislated by Congress, refugee admissions is one area where the president has extraordinary unilateral power. The president can raise or lower the number of admissions each year simply by issuing a new presidential finding. Thus, when the White House waffled on increasing refugee admissions numbers in mid-April and then suddenly announced that Trump’s cap would be maintained, it left immigrants’ rights advocates scratching their heads in confusion.

If Biden’s initial decision to maintain Trump’s camp was a cold political calculation designed to prove the Biden administration’s immigration “toughness” in the face of would-be asylees along the southern border, as appears to have been the case, it made precious little sense even in relation to that cynical goal. For while a large majority of Americans do critique Biden’s handling of the surge of would-be migrants along the border with Mexico, many of their criticisms are about the specific ways in which unaccompanied minors are being treated and about how large numbers of children have been stuck in holding centers for days and weeks on end. It’s important to note that the Pew Research Center survey that showed that two out of three Americans thought the border surge was being handled poorly also showed nearly seven in ten Americans saying undocumented residents should be offered a viable path to legal residency.

All of this should have provided ample political cover for Biden to raise the refugee cap last month. Instead, inexplicably, he dropped the ball.

Sometimes, it seems, politicians need to be rescued from their own worst impulses. Such was certainly the case with Biden and refugees. Had his decision to adhere to Trump’s nativist cap held, he would have squandered an opportunity to set the U.S. on a better course. Now, however, under fierce pressure from the grassroots, he has pressed the reset button. After four years in which Trump went out of his way to beat up on refugees, to humiliate the vulnerable, and to seek political hay by exploiting their misfortunes, Biden has now — albeit belatedly and only under huge pressure from his own grassroots and from many Democratic members of Congress — taken the first and most basic step toward salvaging the country’s refugee resettlement program.