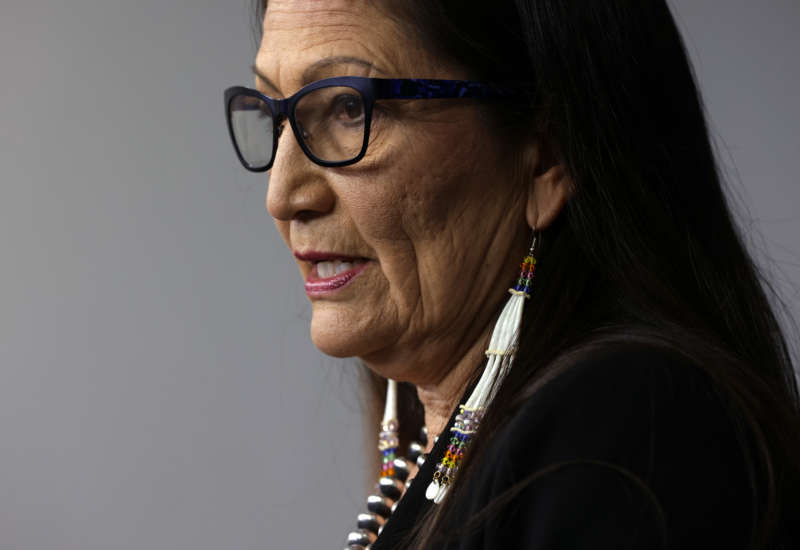 In an interview with HuffPost on Tuesday, Secretary Haaland called Santorum’s remarks “unfortunate” and suggested that part of the problem behind the former senator’s misguided comments might stem from his lack of education on the subject of Native people’s histories.

The comments from Santorum resulted in immense criticism of his ignorance about the contributions of Indigenous peoples living on the North American continent prior to the arrival of Europeans.

Speaking on April 23 before a gathering of Young America’s Foundation, an organization for young conservatives, Santorum pushed his uninformed idea, which is not backed by history, that white colonizers started out with nothing to form what would eventually become the United States. The comments he made completely ignored the historical role played by the Native peoples of this continent in helping to form the nation.

Since making those comments, Santorum has faced calls from several groups for him to be fired from his role as a political commentator for CNN — including from IllumiNative, a nonprofit focused on challenging negative narratives about Native Americans, which described Santorum’s comments as dangerous for “fueling white supremacy by erasing the history of Native peoples.”

“CNN should not give Rick Santorum a national platform where he can spew this type of ignorance and bigotry against communities of color on air,” IllumiNative’s founder Crystal Echo Hawk said. “Allowing him to spread racism and white supremacy to the American public is reckless and irresponsible.”

Santorum tried to backpedal on his comments, but failed to adequately address the problems that existed in his original statement last month. Speaking on CNN earlier this week, Santorum said:

I misspoke. What I was talking about is, as you can see from the runup, I was talking about the founding of our country. I had given a long talk about the Constitution, the Declaration of Independence and the ideas behind those, and that I was saying we sort of created that anew, if you will. And I was not trying to dismiss Native Americans.

“I cannot believe the first words out of his mouth weren’t, ‘I’m sorry,’” Lemon said, adding, “Did he actually think it was a good idea for him to come on television and try to whitewash the whitewash that he whitewashed?”

“Perhaps we haven’t done a good job about educating Americans about history, because Native American history is American history,” noted Secretary Haaland on Tuesday. “When we think about the influence that Native Americans have had on the forming of the United States, right? The U.S. Constitution is based on the Iroquois Confederacy. Native Americans from some tribes here in this country have some of the oldest democracies in the world.”

“I mean, I could probably suggest a few pieces of reading for the senator that would, you know, help him to branch out on his knowledge of American history,” the Interior secretary added.

Indeed, the very legislative body that Santorum once served in has itself recognized the vital role Native Americans played in the forming of the U.S. A resolution that passed concurrently by the House and Senate in 1988 “[acknowledged] the contribution of the Iroquois Confederacy to the development of the United States Constitution.”

Santorum’s attempts to backpedal on his comments earlier this week, however, did not halt calls for him to be fired. Fawn Sharp, the president of the National Congress of American Indians, which had previously called for Santorum to lose his job at CNN, reiterated her disappointment with the network, and her organization continued to call for Santorum to be terminated from his role.

“I was optimistic he would own it, he would recognize it and he would apologize but he did none of those things,” Sharp said.