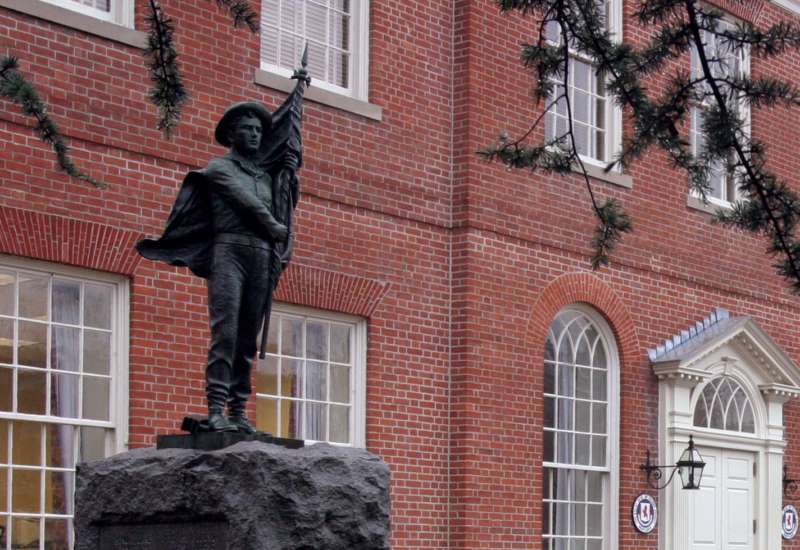 The presence of a Confederate statue outside a courthouse in Maryland has sparked a federal lawsuit, with plaintiffs looking to have the monument removed on legal grounds after multiple attempts to get the county to voluntarily take it down failed.

Richard Potter, president of the Talbot County branch of the NAACP, first pushed for the removal of the “Talbot Boys” statue that currently resides in front of the courthouse in 2015, but the county board voted by a 5-0 vote against doing so at the time. In August 2020, two of those board members changed their minds on the matter, but a majority of the board by a 3-2 vote decided to keep the statue standing.

Officials who voted in favor of keeping the statue in last year’s vote justified doing so by faulting the limitations on getting public input on the matter during the coronavirus pandemic. Potter described the explanations given at the time as “a bunch of surface-level excuses that continue to uphold systemic racism in Talbot County.”

Now Potter and his chapter of the NAACP are being joined by Kisha Petticolas, a Black lawyer who works within the county’s public defender’s office, as well as with lawyers from the American Civil Liberties Union of Maryland, to sue the county in federal court to have the statue removed, alleging that the continued presence of the Confederate monument violates both state and federal law.

“That any government in the United States would continue to maintain the symbolism of white supremacy and promote a legacy of racial subjugation should shock the conscience,” their lawsuit states. “That Talbot County does so on a courthouse lawn — a place of prominence that holds itself out as the seat of justice in the county; a place that county citizens pay for and maintain with tax dollars, including the tax dollars of its Black citizens who are overtly denigrated and humiliated by the statue — only compounds the unconscionability of the statue and illuminates its illegality.”

Keeping the statue on county grounds “sends a message that the community does not value Black people, that justice is not blind, and that Black people are not equal in the eyes of the county,” the lawsuit explained. “For Black employees and litigants entering the courthouse, the statue is, in its least damaging capacity, intimidating and demoralizing.”

The Talbot Boys statue was dedicated in 1916, several decades after the end of the Civil War. It was a time during which several monuments to the Confederacy and to Confederate leaders began to appear around the country. That the period coincided with the enactment of several Jim Crow laws is proof that they were part of an attempt to promote white supremacist ideologies, many scholars and historians have pointed out.

“The statue’s origin traces directly back to the violence of Jim Crow, which followed post-Civil War Reconstruction. It was erected at a time when Confederate statues were used as a means of racial intimidation,” the lawsuit explains.

Honoring those who died on the losing side of the war, a side that Maryland was never technically a part of, is an irony that the lawsuit makes note of.

“[It’s] telling that no monument was erected to honor the sacrifices of those from Talbot County who fought for the Union — particularly since Maryland was not part of the Confederacy,” the lawsuit says.

Petticolas, during a press conference on Wednesday announcing the lawsuit, said it was “beyond time for this statue to be removed from the courthouse grounds.”

“Every day, I have to walk past that statue to get to work. It’s an unavoidable and painfully constant reminder of a time when white people fought for Black people to stay enslaved,” she added. “It is a violent, hateful legacy that white supremacists fought to preserve. How can we keep this Confederate monument erected without promoting the same legacy of white supremacy?”

Demands to remove Confederate symbols on public grounds across the country have swelled in recent years. More than 160 such symbols were removed across the U.S. in 2020 alone, with all but one being taken down after the police-perpetrated killing of George Floyd last May. Still, around 2,100 public Confederate symbols remain in the U.S., and of those, 704 are monuments.