While Democrats Work on Infrastructure, Republicans Are Busy Defending Slavery 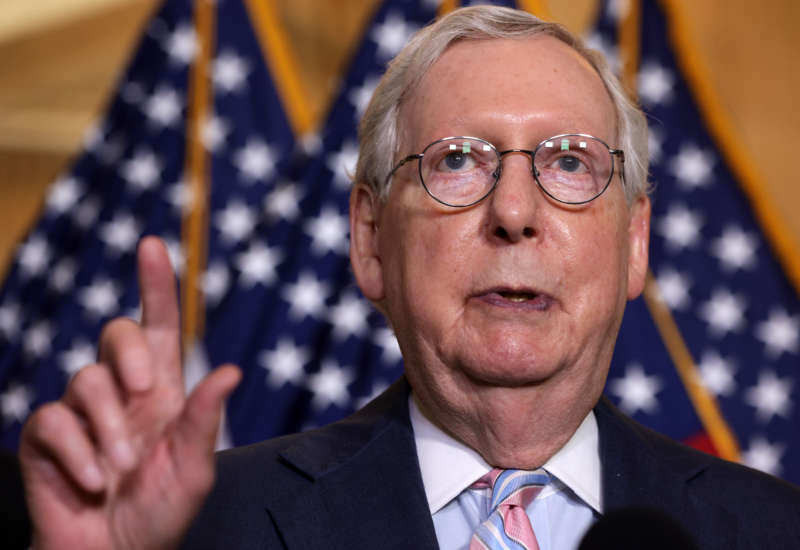 As the nation grapples with fighting for racial justice and against police murders of Black Americans, Republicans have evidently found a different cause worth fighting for: making racist, seemingly unprompted defenses of slavery.

On Monday, Senate Minority Leader Mitch McConnell (R-Kentucky) said that he doesn’t believe that 1619, the year that enslaved Africans first arrived in the U.S., is an important date in history. People have “exotic notions” about important points in U.S. history, and 1619 isn’t one of them, McConnell said.

“I just simply don’t think [racism is] part of the core underpinning of what American civic education ought to be about,” McConnell continued, speaking at the University of Louisville. McConnell has gone on a tirade against The New York Times’s 1619 Project about slavery in the U.S. and Democrats’ anti-racism agenda — though anti-anti-racism, as commentators have pointed out, is simply just racism.

Nikole Hannah-Jones, who headed the 1619 Project on slavery that has Republicans up in arms, spoke on CNN about McConnell’s comments. “This is not about the facts of history — it’s about trying to prohibit the teaching of ideas they don’t like,” she said.

Indeed, many Republicans have long embraced racism but have been emboldened by Donald Trump’s style of being openly and brazenly so — to the point that some political journalists have noted that the GOP wants to be called racist so that they can play the victim and claim to be silenced by anti-racists.

Perhaps that’s why Tennessee Republican state Rep. Justin Lafferty on Tuesday suggested that the Three-Fifths Compromise, which counted enslaved people as less than one whole person in population counts, was actually a good thing because it helped to end slavery. But it didn’t; it only further “sanctioned slavery more decidedly than any previous action,” as historian Staughton Lynd wrote.

Or maybe it’s why Colorado Republican state lawmaker Rep. Ron Hanks also defended the Three-Fifths Compromise last month, saying that it “was not impugning anybody’s humanity” to count an enslaved person as less than one human being.

Republicans evidently don’t believe that it was just some elements of slavery that were positive, however; Louisiana Republican state Rep. Ray Garofalo Jr. last week said that schools should teach “the good” of slavery alongside the bad. “If you are having a discussion on whatever the case may be, on slavery, then you can talk about everything dealing with slavery: the good, the bad, the ugly,” Garofalo said.

There is, of course, no “good” to slavery, and it’s abhorrently racist to suggest as such. Garofalo later retracted his statement, but only after Democrats circulated a video of him speaking on the “good” of slavery that now has nearly a million views.

Regardless of the GOP’s intentions, it’s no coincidence that they are raging an attack on anti-racism just as rallies and protests for Black Lives have swept the country. Though the GOP’s overt defenses of slavery all happened in recent weeks, the right has been waging racist attacks prominently in the past year.

For months, the right has been railing against critical race theory — scholarly work with the goal of dismantling oppression and white supremacy — despite lacking a clear understanding of what it is. They are claiming that racism has been eradicated in the U.S. even as Black Americans face death at the hands of the state simply for walking down the street or while sleeping in their homes.

It’s evidently not enough for the GOP that racism is alive and well in the U.S. — the party seems to be operating on a mandate to enshrine racism in the nation forever — and normalizing defenses of slavery appear to be part of that strategy.