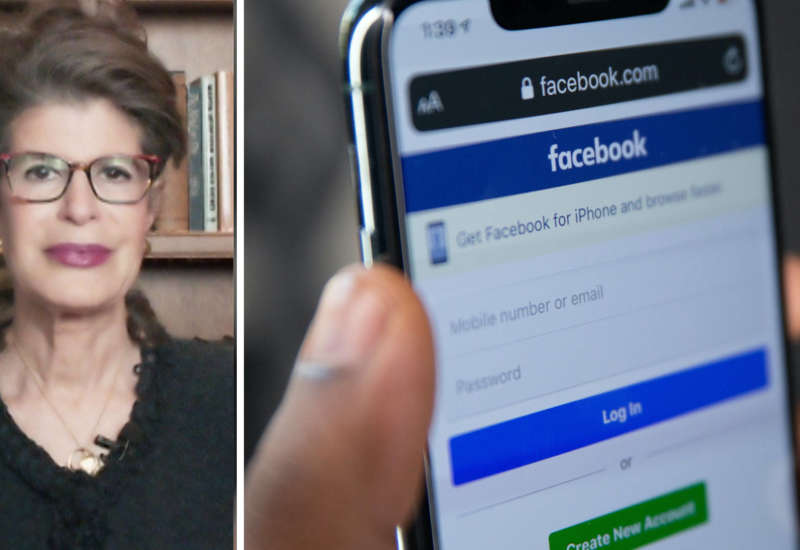 Former President Donald Trump will continue to stay off Facebook after the company’s oversight board ruled Wednesday that his ban was justified for creating “an environment where a serious risk of violence was possible.” Trump was banned shortly after the January 6 insurrection at the U.S. Capitol, which he helped foment by promoting baseless claims of election fraud. The oversight board also said Facebook should reassess its ban and make a final decision in six months. Shoshana Zuboff, professor emerita at Harvard Business School and author of the book The Age of Surveillance Capitalism, says that Facebook’s recent moves follow years of inaction by CEO Mark Zuckerberg. “He showed that he was willing to do just about anything to appease Trump … to keep regulation at bay,” Zuboff says.

AMY GOODMAN: Here on Democracy Now!, democracynow.org, The Quarantine Report, I’m Amy Goodman, with Nermeen Shaikh. You can watch, listen and read transcripts using our iOS and Android apps. Download them for free from the Apple App Store or Google Play Store today.

Former President Trump’s Facebook account will remain suspended — at least for now. On Wednesday, an oversight board set up by Facebook upheld the January 7th ban, saying Trump’s rhetoric created a, quote, “serious risk of violence.” But the board said Facebook should review whether the ban should be indefinite.

For more, we go to Shoshana Zuboff, professor emerita at Harvard Business School, author of the book The Age of Surveillance Capitalism: The Fight for a Human Future at the New Frontier of Power.

Professor Zuboff, welcome back to Democracy Now! Your reaction to the Facebook-appointed board’s decision?

SHOSHANA ZUBOFF: Well, you know, it looks like this so-called oversight board, which of course, everyone should understand, was set up by Mr. Zuckerberg with a $130 million endowment and really is a device to help keep him free of public law, help keep him free of regulation. So, we know that Mr. Zuckerberg didn’t do a very good job taming political speech. He allowed political speech to go free of fact-checking. And the worst example of this, of course, was Mr. Trump, who became a clear and present danger to our democracy. So, rather than grappling with that, this decision was given to this so-called oversight board, and now it looks like they’ve kicked it back to Facebook.

The real issue here, though, Amy, is that in kicking it back to Facebook, they’ve actually kicked it back to the Biden administration. And here’s why I’m going to say that. First of all, why did Mark Zuckerberg indulge and appease Donald Trump for so many years, and especially in that last year of election season as things became more bizarre, inflammatory and dangerous? Well, there were — the key reason was political appeasement. Just as the oversight board, so-called, is set up to keep him free of regulation, he showed that he was willing to do just about anything to appease Trump, appease the Trump administration, appease the conservative allies, to keep regulation at bay. And in appeasing Trump, all that Zuckerberg really had to do was not intervene in his economic machine, surveillance capitalism, which is programmed, engineered to maximize engagement and data extraction by circulating and amplifying what turns out to be the most inflammatory, the most bizarre, the most dangerous, the most threatening, the craziest content. So, by keeping Trump going, he satisfied his political goals, and he also satisfied his economic goals.

Now, as we saw yesterday, very, very quickly, Trump is back on his microphone — not on Facebook, not on Twitter, but he’s got plenty of other outlets. And what was the first thing he started to do? Threaten Zuckerberg with regulation. Threaten Zuckerberg with Republican retaliation. Right? So, now we are back in the political arena. And this means that the Biden administration, that team, is going to have to take a stand, because the thing that’s going to keep Mr. Trump off Facebook and save American democracy is going to be a situation where Mr. Zuckerberg fears the Democrats as much as he fears the Republicans. And so far that has not been the case. So, we are now back into a political power match. And that’s going to really change the dynamics of these next few months.

NERMEEN SHAIKH: Professor Zuboff, could you respond to those who have criticized the decision by Facebook to indefinitely suspend Trump’s account? It’s not just conservatives in this country, but also several European leaders who have said that tech companies have no place in making decisions like this; this decision and decisions like it should be in the hands of governments.

SHOSHANA ZUBOFF: Well, that is absolutely true. You know, Mr. Zuckerberg and his so-called oversight board are running around the rim of a donut chasing each other’s tails, looking for solutions, when the solution space is in the hole. And the problem is that surveillance capitalism, companies like Facebook that depend upon the secret extraction of behavioral data, which gets turned into targeting and targeted ads, you know, this is a very pernicious, extractive, dangerous, anti-democratic economics that has taken hold in the last 20 years, the last two decades.

And it’s done so because democracy has failed to act. And it’s not only true in America, but the liberal democracies around the world have failed to develop a distinct vision of how do you design and deploy and apply the digital world, digital technology, in a way that advances democracy and allows democracy to flourish. So, we’re not China, but instead we’ve allowed these private companies to create a different kind of surveillance state in our surveillance society in America and in the West that operates under private capital.

So, we are long overdue for the same kind of period of tremendous creativity and invention that we saw in the 20th century. You know, the first part of the 20th century, the employers, the owners of the great industrial enterprises, they had all the power. They had all the decision rights. Everything that happened, happened based on their private property rights. That’s the same situation we’re in today. And in the 20th century, you know, we created these huge behemoths, the monopolies, the cartels, the trusts, and it looked like ordinary citizens, and even democracy itself, had no chance. And we were looking forward to a century of extreme inequality and serfdom. But, ultimately, beginning in the third and especially the fourth decades of the 20th century —

AMY GOODMAN: We have 10 seconds.

SHOSHANA ZUBOFF: — democracy fought back. And we created the rights, laws and institutions we needed to tame industrial capitalism, tether it to democracy. We can do the same thing today. This third decade is now. Our opportunity for citizens and lawmakers to come together, we need to bring the digital into democracy’s house. And —

AMY GOODMAN: Professor Zuboff, we’re going to do Part 2 of this discussion, post it online at democracynow.org. Her book, The Age of Surveillance Capitalism. I’m Amy Goodman, with Nermeen Shaikh.