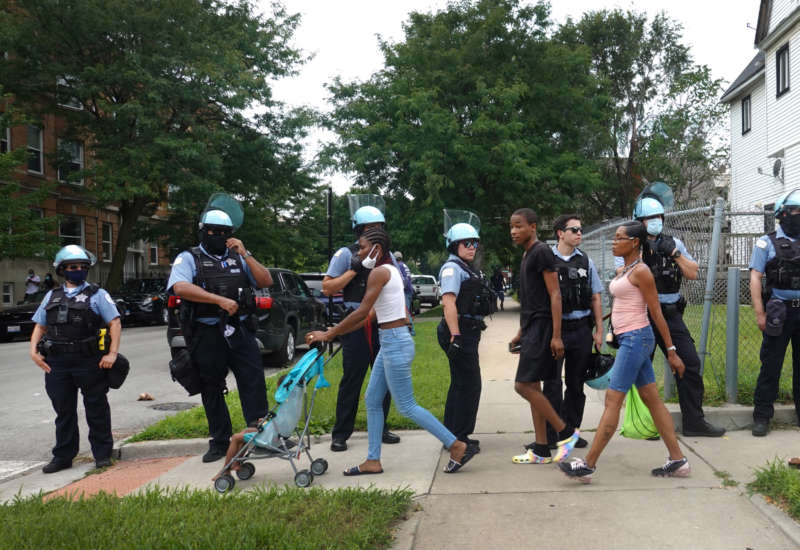 These last weeks, months, years and decades we keep on adding names to the list — Adam Toledo, Daunte Wright, Ma’Khia Bryant, Ronald Johnson, Pierre Loury, Rekia Boyd, Nickolas Lee, Laquan McDonald, Archie Lee Chambers, Maurice Granton, Anthony Alvarez.… The list of victims of police murder seems never-ending. Then there is the list of police torture survivors — Gerald Reed, Stanley Howard, Tony Anderson, Darrell Fair, Sean Tyler, Kilroy Watkins, and on and on and on. Many of us speak these names. We show up at the rallies and actions demanding justice. We work tirelessly to dismantle the long-serving systems and structures that brutalize and kill Black and Brown bodies. We feel the anger and the terror. But, we don’t often acknowledge that behind every name, every video, every individual locked up in the United States, every police stop, immense and complex trauma is left behind.

Our language is limited in its ability to name the multiple consequences of the particular compounded trauma wreaked by and left behind at the hands of the state — directly and indirectly. This absence of language is a result of the invisibility and denial that our systems rely upon to continue to enact oppression. Language is essential for helping us to examine, analyze, identify, reflect and act. We currently exist very much in a pre-language reality, where there is little acknowledgement of the harm, trauma and death that is caused by the state organization of police and mass incarceration. This lack of official language to name that trauma, of course, serves a specific agenda. If you cannot name a thing, it is harder to mobilize against and around it, it is harder to uproot it, and it is very easy to deny it exists at all, let alone address its human and societal impact except for the brief moments of extreme violence that force a disruption of the dominant narrative by providing a momentary glimpse into the normal operations of the violence of the state.

At the Chicago Torture Justice Center (CTJC), we work with survivors of police violence, police torture and police murder every day. We also know that it is not only incidents of violence that leave a scar. Even those who haven’t been victims of direct violence are experiencing complex trauma — the trauma of a lifetime of knowing that every time you lay your head down at night, or walk to the bus stop, or drive down the street, your chances of being targeted, assaulted or even murdered at the hands of the police are disproportionately higher if you are Black, if you are Brown.

In Chicago, this means that Black people are 22 times more likely to be killed by police than their white counterparts, and Latinx people are six times more likely. If you are a Chicago police torture survivor, or a family member of a loved one killed by the Chicago Police Department (CPD), or if you are trans, or homeless or disabled, these statistics are compounded. This means that there are significant portions of the population of the city that are living in constant awareness of the deadly potential every single law enforcement agent carries with them. In a city that has one of the largest police forces per capita among big cities in the United States, the instances of running into police are higher than most places in the country.

For over 70 percent of Chicago’s residents who are Black and Brown, this police presence comes at a high cost. In addition to the lives lost and constant threat of danger, there is a trail of trauma leading to increased states of hypervigilance, unsafety and helplessness. This lived reality for many Black and Brown individuals overwhelms the nervous system, and forces individuals and communities to develop survival strategies and coping mechanisms that seek to mitigate the reality of living with a perpetual threat to life and well-being.

These conditions add to the reasons why communities that are surveilled and occupied by policing are also always the poorest and have disproportionate rates of health disparities related to stress. This ongoing stress is state regulated and maintained. Oppression, as defined by Prentis Hemphill, is how society organizes itself to control and distribute trauma. This definition helps us better understand the political nature of health, wellness and trauma, and underscores the important questions of: Who does it serve when we are unwell? Who necessitates and perpetuates our unwellness and our unhealth, and why?

Behind every name, every video, every individual locked up in the United States, every police stop, immense and complex trauma is left behind.

The violence — direct and indirect — of racialized policing is both traumatic and trauma-producing. For many, this means that since the point of birth, the outside world has represented a perpetual environment of violence and harm, with government agents being the largest perpetrators and managers of this violence. Danger — and threat to life — is embodied by police, reinforced by politicians who give cover and legitimacy to policing, and enforced through the courts. This can mean then, for some, safety has never been experienced outside of loved ones, family and immediate community.

Seeing a court system that allows officers with patterns and practices of abuse and court-verified torture to testify and have their word valued more than those who lived the harm, which is the current reality specifically relevant to CPD torture survivors, is trauma-producing.

Witnessing the ongoing existence of the Fraternal Order of Police (FOP), the union representing police officers, which continues to justify police-perpetrated torture and murder, is trauma-producing. In Chicago, FOP leadership alone represents more than at least 142 disciplinary allegations, yet the mayor continues to engage with and pander to the union. Witnessing that pandering is trauma-producing, too.

Communities that are surveilled and occupied by policing are also always the poorest and have disproportionate rates of health disparities related to stress.

What do we know about systemic trauma, defined by CTJC as repeated, ongoing violation, exploitation, and/or deprivation of groups of people? We know that it overwhelms and breaks down our senses of safety and connection, and leaves us on hyperalert. We know that being in a constant state of hypervigilance can rob us of a feeling of having autonomy or control of our self and our bodies. This tension gets stuck and wreaks havoc — emotional, spiritual, social and physical — if it is not tended to and if we don’t invest attention and resources in mitigating its impact. Increases in blood pressure, sleep disturbances, ability to engage in intimate relationships, and more are just some of the consequences of chronic hypervigilance and persistent and complex trauma. All of these conditions tend to be depoliticized in the dominant narrative — somehow, Black and Brown communities are simply more impacted by “predispositional health factors.” In fact, they are consequences of focused deliberately imposed trauma by the state.

At CTJC, we recognize that addressing trauma is not a one-on-one experience that can only happen in a therapist’s office. It is about helping to find new ways to generate safety (internal and external) and to increase our self-determination — our ability to name for ourselves what we need and care about. When our systems are under perpetual siege, when we are not able to experience senses of safety, our bodies, which are experts at survival, know how to shut down or numb out as part of our trauma responses.

Our work is to enable self-determined processes of reintegration back into the body, as we learn how to generate safety for ourselves and our communities. We understand that “healing” is also a political project that includes ending the systems that necessitate and create violence. These individual, community and systemic processes occur together and at times simultaneously.

This last year has seen our communities take massive steps towards collective healing as they rose up to unapologetically name what they needed to feel and be safe. They have stepped into their truth and power to demand not only the defunding of CPD, but also the types of services and investments that will make a difference in their lives and communities. They have collectively moved to heal deep generational wounds of oppression. However, they have been met with police in riot gear and with a refusal by our city government to shift funding away from the police. We have seen 65 percent of unrestricted CARES Act money going to CPD as instructed by our mayor (of the $1.2 billion in CARES Act funds allotted to Chicago, and of the $470 million for personnel costs, $281 million went to the CPD), while the community’s demands for vital support services are rejected.

Our communities are trying to heal, and our city and its systems and structures are not listening — and more often than not, acting in ways opposite to what the community is saying they need. That is trauma-producing.

This is all playing out in Chicago at a time when the country has been forced to face the multiple violent realities of policing and the myriad ways in which government bodies collaborate to protect police, deny survivors and families truths, and perform superficial platitudinal commitments of change — all while police continue to murder. As an example, during Derek Chauvin’s trial, an average of three people a day were killed by police nationwide. As the verdict was being prepared to be aired, Columbus, Ohio, police shot and killed a 16-year-old child, Ma’Khia Bryant, after she called them for help.

For many, since the point of birth, the outside world has represented a perpetual environment of violence and harm, with government agents being the largest perpetrators and managers of this violence.

The violence we are marching against is not only the physical violence you can watch on video after video of CPD, but the structural violence of decision after decision our city is making to compound trauma, invest in carceral strategies rather than life-affirming ones, and to prioritize and protect the systems and institutions that perpetrate so much harm on our communities. That structural violence also kills and is further trauma-producing. One of the leaders of Justice for Families, Arewa Karen Winters, the great aunty of Pierre Loury who was killed by CPD officer Sean Hitz in 2016, redefines PTSD to stand for present traumatic stress disorder because, as she observes correctly, trauma is ongoing.