Less-Educated Workers Were Hardest Hit in Recession. That Hasn’t Changed. 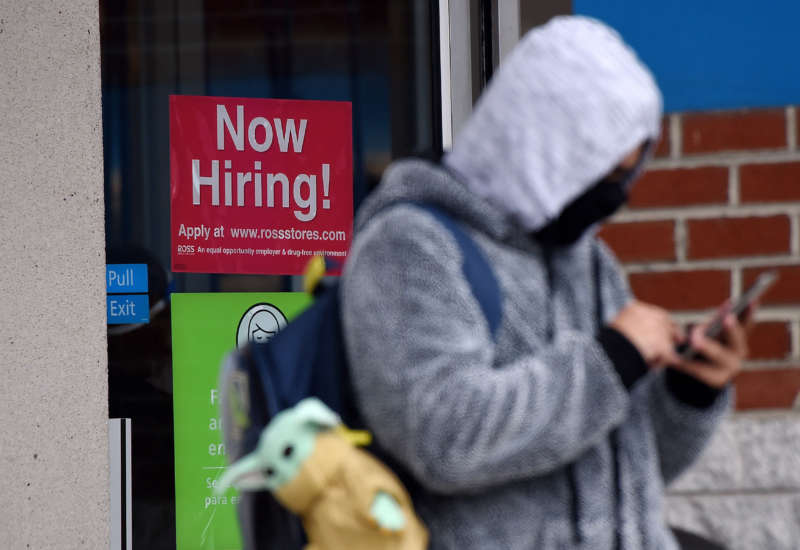 The April employment report was considerably weaker than had generally been expected, with the economy adding just 266,000 jobs. Furthermore, the prior two months numbers were revised down by 78,000. The unemployment rate edged up to 6.1 percent, but this was entirely due to more people entering the labor force. The employment-to-population ratio (EPOP) also edged up by 0.1 percentage point to 57.9 percent. That is still 2.9 percentage points below its average for 2019.

Performance Across Sectors Was Very Mixed

The leisure and hospitality sector accounted for more than all the gains in April, adding 331,000 jobs. Restaurants added 187,000; arts and entertainment added 89,600; and hotels added 54,400. State and local government added a surprisingly low 39,000 jobs, almost all in education. Employment in state and local governments is still 1,278,000 below the pre-pandemic level. There should be large employment increases here as more schools reopen in May.

Several sectors were big job losers. Manufacturing lost 18,000 jobs, which was entirely attributable to a loss of 27,000 jobs in the car industry. This was due to shutdowns caused by a shortage of semiconductors.

There was a loss of 77,400 jobs in the courier industry and 111,400 in the temp sector. It’s not clear whether these declines reflect demand or supply conditions. These tend to be lower paying jobs, so workers may have better alternatives. On the other hand, as people feel more comfortable going out after being vaccinated there may be less demand for couriers.

There was also a loss of 49,400 jobs in food stores, which could reflect reduced demand as people increasingly are going to restaurants. Employment in the sector is still almost 40,000 higher than the pre-pandemic level. Nursing care facilities lost 18,800 jobs (1.3 percent of employment). These also tend to be low-paying jobs, so this could reflect supply conditions.

Construction showed no change in employment in April. This could just be a timing fluke, the sector was reported as adding 97,000 jobs in March, and there is plenty of evidence that the sector is booming.

Some Evidence of Labor Shortages in Low-Paying Sectors

If employers are having trouble finding workers, as many claim, then we should expect to see more rapid wage growth and an increase in the length of the workweek, as employers try to work their existing workforce more hours. We do see some evidence of both.

The annual rate of wage growth comparing the last three months (February, March, and April) with the prior three months, was 3.7 percent for production and nonsupervisory workers overall, 4.1 percent for retail, and 17.6 percent for leisure and hospitality. These data are erratic, but they do indicate some acceleration in wage growth, especially for hotels and restaurants.

There is also some evidence for an increasing length of the workweek, which is consistent with employers having trouble getting workers. For production and nonsupervisory workers overall, weekly hours are up 0.8 hours from the 2019 average. It is the same for retail, and 0.6 hours for leisure and hospitality.

Less-educated workers were hardest hit in the recession, but many of us hoped that the situation would even out as the recovery progressed. This has not yet happened.

There was a sharp fall in involuntary part-time work of 583,000. The current level is roughly equal to 2017 levels. By contrast, voluntary part-time is still 2,400,000 below its 2019 average, a drop of almost 12 percent. This reflects the loss of jobs in restaurants and hotels, many of which are part-time.

The share of unemployment due to voluntary quits edges up only slightly to 8.3 percent, still lower than at any point in the last quarter century, excepting the Great Recession. This measure is usually seen as a sign of workers confidence in their labor market prospects.

It is also worth noting that the share of long-term unemployment remains extraordinarily high, although it did edge down slightly from 43.4 percent to 43.0 percent. The all-time high for this measure was 45.2 percent in the Great Recession.

Mixed Report — Economy Is Moving in the Right Direction, but Slowly

In more normal times job growth of 266,000 would be seen as very strong, but not when the economy is down more than 8 million jobs. The job loss in some sectors may prove to be anomalies, and some of the slow growth is almost certainly just a question of timing, as with state and local government employment. It is possible that the unemployment insurance supplements are having some disincentive effect, but if so, that will quickly dwindle as they end in September.

Even with the weak job growth reported for April, the average growth for the last three months is still 524,000. If we can maintain that pace, the labor market will be looking pretty good by the end of the year.