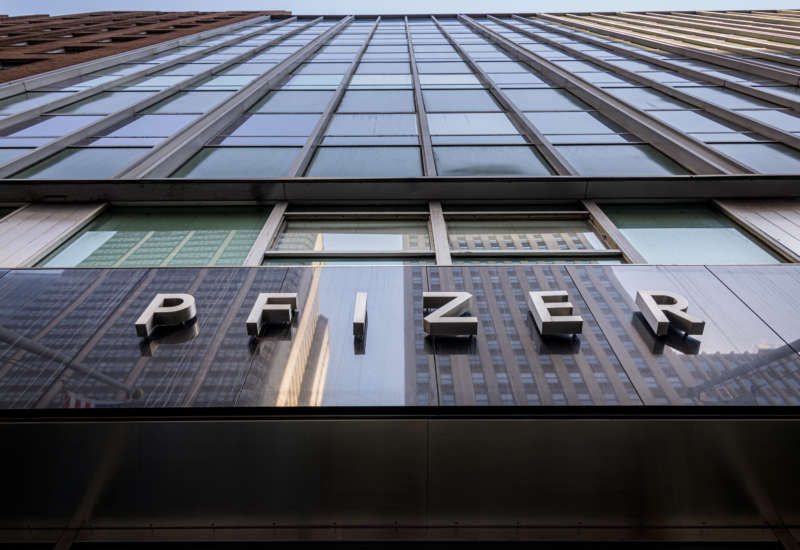 The pharmaceutical industry spent a record $92 million lobbying the federal government during the first three months of 2021, putting Big Pharma on track to break its annual spending record for a second year in a row. The intense lobbying comes as countries across the world are demanding access to patented COVID vaccine technology and many Democrats are pushing to expand Medicare and lower prescription drug prices.

Big Pharma’s lobbying expenditures represent a 6.3 percent increase in spending over the first quarter of 2020, according to the Center for Responsive Politics. Drug companies would go on to collectively spend more money on lobbying in 2020 than ever before. Meanwhile, the COVID pandemic spread across the globe, and the United States and other wealthy nations poured billions of dollars into vaccine development and distribution through deals and partnerships with private pharmaceutical and biotechnology firms.

The pharmaceutical industry has also pumped millions of dollars into a conservative dark money group that launched a $4 million advertising blitz this week against H.R. 3, legislation backed by House Democrats that would allow the government to negotiate for lower prescription drug prices by leveraging the purchasing power of the Medicare program. The pharmaceutical lobby outspends all other industries on Capitol Hill and has long opposed the proposed Medicare reform, which enjoys bipartisan support among voters and passed the House last year before dying in the Senate.

“Just as Congress is moving to deliver much-needed relief to patients struggling under the burden of high prescription drug prices, Big Pharma has launched a $4 million dark money campaign loaded with lies to attack H.R. 3,” said David Mitchell, founder of Patients For Affordable Drugs Now, a non-partisan group that lobbies for lower drug prices, in a statement.

Despite the industry’s lavish lobbying efforts, the Biden administration bowed to intense pressure at home and abroad and announced on Wednesday support for temporarily waiving international patent protections for COVID vaccines and manufacturing technology. India and South Africa proposed an emergency patent waiver in October to prevent the massive global disparities in vaccine access that we see today, but under the Trump administration, the United States joined a handful of other wealthy countries to block negotiations on the proposal.

The Biden administration said it would enter negotiations over a vaccine patent waiver at the WTO but warned that the negotiations would be “complex” and did not signal support for a specific proposal, according to a brief statement issued by the State Department.

Proponents — including dozens of international health organizations and countries across the world — argue the vaccine patent waiver is needed to scale-up COVID vaccine production and distribution in lower-income nations as variants spread and massive outbreaks continue in countries such as India and Brazil. Sen. Bernie Sanders (I-Vermont), who worked with progressive Democrats to push President Biden toward supporting the vaccine patent waiver, applauded President Biden this week for putting “people over profits.”

Pharmaceutical Research and Manufacturers of America (PhRMA), a powerful pharmaceutical industry trade group, was unsuccessful in its push to convince the Biden administration to oppose waiving of patent rights, which could threaten profits for private drug companies that own vaccine recipes and manufacturing know-how. PhRMA, which typically spends more on lobbying than individual drug companies, reported $8.7 million in lobbying expenditures during the first three months of 2021.

Pfizer, an industry giant that invested heavily in developing a leading COVID vaccine, topped other drug companies with $3.7 million in lobbying spending so far this year. The company reported this week that vaccines sales alone have generated $3.5 billion in profits. Along with PhRMA and other drug companies, Pfizer lobbied hard to maintain U.S. opposition to the vaccine patent waiver at the WTO.

PhRMA has also given millions of dollars over the past decade to American Action Network, the self-described “center-right” think tank running $4 million worth of ads in key congressional districts against the House bill for lowering prescription drug prices through Medicare. As a dark money nonprofit, American Action Network is not required to reveal its donors. However, researchers have uncovered tax receipts showing that PhRMA was among the group’s top donors in the past, along with fossil fuel interests and various conservative groups.

“This is straight out of Big Pharma’s playbook — PhRMA CEO Steve Ubl said himself he will be ‘rolling the tanks … to push back against policy proposals adverse to the industry’s interests,’” Mitchell said.

As chairman of the Senate Budget Committee, Sanders is pushing back against the influence that drug companies enjoy in Congress. In an op-ed this week, Sanders argued that allowing the government to negotiate drug prices through Medicare would put the U.S. on par with other nations that do the same and lower drug costs for everyone, regardless of whether they have Medicare or other health care coverage. Congress could then use the money saved on purchasing drugs through Medicare to lower the age of Medicare eligibility and expand health care coverage for millions of aging workers and retired seniors.

“The pharmaceutical industry, the most powerful lobby in Washington, believes that their wealth and power can prevent Congress and the president from taking action to expand Medicare and lower prescription drug prices. Well, I disagree,” Sanders wrote in The Guardian.

H.R. 3, the bill backed by Sanders and other Democrats that would allow Medicare to negotiate for lower drug prices, would also cap out-of-pocket drug costs for Medicare beneficiaries at $2,000 a year and penalize drug companies for price gouging. A 2019 poll found that nearly 90 percent of respondents supported allowing the government to negotiate drug prices through Medicare. Similarly, a recent poll found that a majority of likely voters supported the vaccine patent waiver at the WTO, with 60 percent agreeing that the U.S. should drop its opposition to the waiver and only 28 percent disagreeing.