Progressives to Corporations: If You Want to Keep Workers, Pay Living Wages 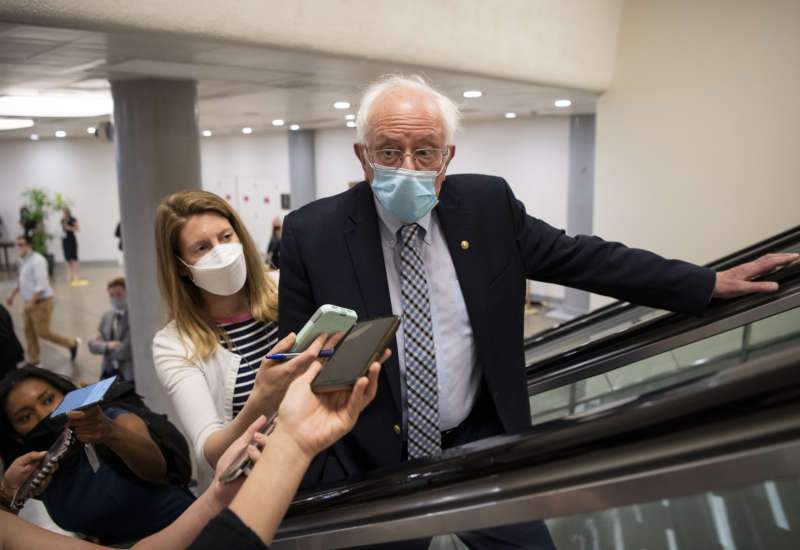 Pushing back on the right-wing narrative about the reason for real or perceived labor shortages in some markets nationwide, progressives on Friday told corporations that if they want to hire more people, they’ll need to start paying better wages.

“No. We don’t need to end [the additional] $300 a week in emergency unemployment benefits that workers desperately need,” Sen. Bernie Sanders (I-Vt.) said in response to the grumbles of the nation’s largest business lobbying group. “We need to end starvation wages in America.”

According to the Chamber’s analysis, the extra $300 unemployment insurance (UI) benefit results in roughly one in four recipients taking home more pay than they earned working.

In response to that claim, Sanders’ staff director Warren Gunnels said: “If one in four recipients are making more off unemployment than they did working, that’s not an indictment of $300 a week in UI benefits. It’s an indictment of corporations paying starvation wages.”

This is not complicated. If you can’t afford to pay your employees a living wage, you do not have a viable business model.

Fun fact: the US Chamber of Commerce is a secretive business lobby that supported a $3M effort to primary me out of office last year bc I stand up to Wall Street. (They lost ) Wal-mart was outed as a secret client.

If UI > wages, the solution is to actually pay a living wage. https://t.co/04C2pCEZsY

“We do not have a shortage of willing workers in this country,” Morris Pearl of the Patriotic Millionaires said in a Friday afternoon statement responding to the Chamber. “We have a shortage of employers who are willing to pay workers enough to live.”

“Claiming that today’s disappointing jobs report is a result of expanded unemployment insurance is nothing more than a cruel tactic to pressure the administration into helping companies that they represent to continue to underpay and exploit their workforce,” Pearl continued. “Our leaders are supposed to be helping to increase wages for low paid workers, not helping employers to keep wages down.”

“Instead of blaming struggling workers,” Pearl continued, “large corporations that do not pay their employees a liveable wage… should take this moment to self-reflect. Maybe — just maybe — paying their workers more than starvation wages would incentivize workers to reenter the workforce.”

Writing for Jacobin earlier this week, Sandy Barnard noted that another overlooked factor is the increased morbidity rates among food and agricultural workers, which increased more than any other occupation during the Covid-19 pandemic, according to a recent study from the University of California–San Francisco.

“Living, breathing people… have decided they do not want to risk their lives for $7.25 per hour and no health benefits,” Barnard wrote.

Rep. Ilhan Omar (D-Minn.) responded to the Chamber’s call for an end to enhanced unemployment benefits by arguing that “the interests of big business are at war with the interests of the working class.”

“They will spend millions of dollars to take $300 a [week] away from you and your family, to force you to work for them for pennies,” she added. “Their greed has no bounds.”