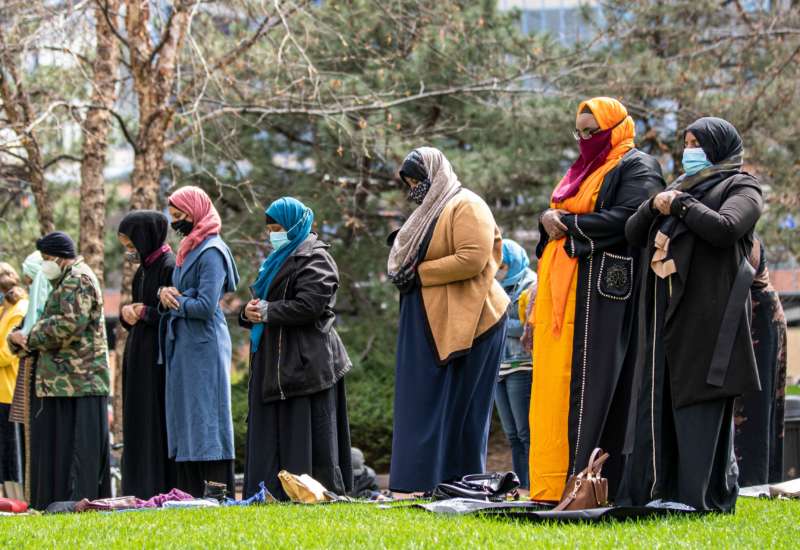 Like many Muslims, I remember feeling excited as a child each year when Ramadan came around. Though I didn’t entirely understand the purpose of fasting, I was proud of being Muslim and was eager to emulate my parents. Since I began fasting in second grade, Ramadan has been a core part of my practice of Islam.

While there is great diversity among Muslims around the globe, the holy month of Ramadan has the power of uniting the entire Ummah (the Arabic word for Muslim community) in a collective observance of fasting and prayer each year. It is this solidarity in worship of Allah that is so evocative of the hadith — the traditions and sayings by the Prophet Muhammad (peace be upon him), in which he said: “The believers in their mutual kindness, compassion, and sympathy are just like one body. When any part of the body suffers, the rest of the body comes to its defense.”

In the current climate of globe-spanning Islamophobia and Muslim suffering, however, acting as one body has become difficult if not impossible. The omnipresent lens of national security subjects our entire faith community to state surveillance, harassment and dehumanizing discourse in media, making it even more difficult for Muslims to reach across existing barriers of race, ethnicity, cultural and linguistic differences.

A recent Vox article titled “9 questions about the Muslim holy month you were too embarrassed to ask” offered answers to questions about the meaning of Ramadan, how Muslims fast and how to be supportive of a friend who is fasting. The final question, however, was, “So if you’re not supposed to get angry or complain or gossip during Ramadan, how come terrorist attacks by groups like ISIS and al-Qaeda always seem to spike during Ramadan?” The Vox author’s tongue-in-cheek response was “because terrorists are assholes.”

The structure of that Vox article seemed aimed at implying that the final question about terrorism followed logically from the others, but in reality, it had no legitimate place in that article. Whereas the preceding questions convey legitimate information about Ramadan, the last question served only to reproduce the constant cultural fixation on the supposed connection between Islam and terrorism.

The Vox article was by no means alone in suggesting a connection between Ramadan and an increase in terrorist attacks — a Google search with the question “does terrorism increase during Ramadan” yields many results. Although empirical claims about this increase in terrorist activity abound, the possibility that something other than Ramadan might account for it is conspicuously absent from any of the responses. The question is consistently posed without any context or alternative hypotheses — leaving Ramadan as the sole explanation for any violence.

An article in The Atlantic titled “Is ISIS More Violent During Ramadan?” is paradigmatic. In seeking answers, this article refers to a 2015 University of Maryland National Consortium for the Study of Terrorism and Responses to Terrorism (START) report which examined data on over a decade of attacks by ISIS and other prior existing terrorist groups. This report concluded that “while major attacks have taken place during Ramadan, we have also observed major attacks outside the month of Ramadan, and periods during which Ramadan was relatively calm. Thus, it remains an open question whether Ramadan is a period of heightened risk.” But one unanswered question remains: What was the impetus was for assuming a connection between Ramadan and violence in the first place, other than Islamophobic tropes about Muslims as inherently violent?

While the authors make what sounds like a rational argument, the argument assumes that the Islamic calendar, in the final analysis, will have the most determining impact on any instances of violence that take place during Ramadan.

An academic article titled “Days of Action or Restraint? How the Islamic Calendar Impacts Violence” explores this question from a wider perspective. According to the authors, “The Islamic calendar provides an opportunity to illuminate the impact of religious practices on violence because the calendar regulates the timing of society-wide observance and because the religious meaning of specific days changes predictably and annually, creating sufficient variation to assess its effect.” While the authors make what sounds like a rational argument, the argument assumes that the Islamic calendar, in the final analysis, will have the most determining impact on any instances of violence that take place during Ramadan.

This study ultimately concludes that rather than fostering violence, the Islamic calendar is a force for restraining it. This is because, the authors reason, potential perpetrators rely on societal support and judgements about the appropriateness of committing acts of violence during or on significant Muslim holidays. In this case, the authors reach a seemingly positive conclusion, using empirical data to support findings that provide a strong rebuttal to the assumed link between Ramadan and terrorism. However, the research question assumes in the first place that there is an impulse or will to violence within Muslim communities that the Islamic calendar is somehow regulating.

The persistence of the debate around whether the holy month of Ramadan is a motivator for violence highlights a phenomenon that has been omnipresent in the “war on terror” — the framing of Islam as a national security threat, which then serves as justification for extreme interventions by the state.

With Islam securitized, its followers, and its practices are seen first and foremost as potential security threats. This imposition of the lens of national security over the actions of Muslims and Muslim communities includes what amounts to an invasion of the private space that is formed by community religious observance. Empirical validity or not aside, the pervasive scrutiny that these spaces are subject to puts practitioners of Islam in the impossible position of having to defend and justify their religion rather than simply practice it. The unifying power of Ramadan should lie in solidarity of belief that transcends difference, not in a common posture of defensiveness that has been imposed on the religion and its adherents from outside.