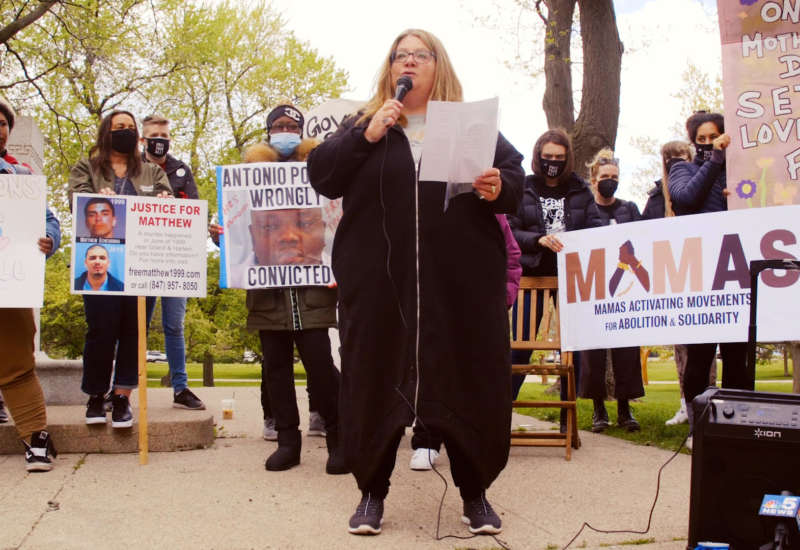 “Some problems we share as women, some we do not. You fear your children will grow up and join the patriarchy and testify against you; we fear our children will be dragged from a car and shot down in the street, and you will turn your backs upon the reasons they are dying.” –Audre Lorde

Now is the time for healing the many divine forms of the feminine, led by Black, Indigenous, and other communities of color (BIPOC), mothers and the stewards of our next generations. As the world is coming face to face with the truth of our mortality through COVID-19, intensified authoritarianism, land confiscation, border control and mass incarceration, anyone who parents will experience Mother’s Day in struggle. Indeed, mother-survivors of victims of police violence, torture, deportation, incarceration and war have walked this road for decades.

For many BIPOC who mother, Mother’s Day is just as much a day of pain as it is a day of love, especially for those who have experienced forced separation from their children or loved ones by the state. While working with the collective Mamas Activating Movements for Abolition and Solidarity (MAMAS), we have found that the pain of mothering in the face of state violence inspires not only rage and resistance for the purpose of reunification with loved ones, but also strategies of collective care whereby no one is mothering individually and everyone is mothering collectively.

As a collective that amplifies the perspectives of mother-survivors of state violence in media, policy and activism, MAMAS has been humbled and blessed to hear and honor the stories of mothering, survival and mutual support emerging from Chicagoland’s undocumented, Indigenous and Palestinian communities, as well as from mothers of police torture survivors. On this Mother’s Day, we insist that we urgently follow their lead to harness the healing power necessary to reshape this country and our planet.

Our world has much to learn about the power of healing and building futures based on love, dignity and justice from collective mothering spaces like MAMAS, where the coming together of mother-survivors can inspire remarkable forces of change. For collective co-founder, Johnaé Strong, MAMAS helped lead her into deep inter-generational healing in her matrilineal bloodline. She writes of her mother joining her this Mother’s Day:

A year ago, we weren’t on speaking terms; I’d resolved in my mind that we may not ever reach that place on this physical plane. Then COVID-19 happened, and each day I held space for the pain and grieving of my chosen family as they processed the death of parents, elders and cherished loved ones. I could not bear the weight of losing someone I loved in a state of estrangement.

Strong goes on to describe how her involvement with MAMAS — and thereby witnessing mother-survivors of police torture enduring multi-level attacks from the state while fighting for the basic human dignity of their children — marked a critical change for her:

Sharing this collective mothering space, I am reminded of my own deep connection to mothering-activism as a Black mother in a long line of Black mothers who have been criminalized and robbed of our ability to heal due to systemic silencing of our trauma manifested as familial secrecy, emotional repression, and fear of expressing shortcomings due to social shaming and the very real threat of incarceration and family separation. It is a story I know intimately. I too am a survivor… Today, I have a heart fixed on connection, mutual care and healing for generations to come.

Strong notes that she often thinks about Regina Russell, mother of Tamon Russell, who was forced into a confession by Chicago police and whose story may never make mainstream national news.

At one of MAMAS’s weekly healing justice circles, Regina shared with us:

The state may physically have Tamon, his body behind bars in a cold cell, but I refuse to let them have his mind, his spirit and sense of self. I will continue to mother him. I will be his doctor when he is sick, his spiritual mentor when he’s lost faith, his advocate when he expresses defeat. I will assert all of these roles and more even while the state is trying to deprive me of them.

The joy and pain of the Black, Latinx, Arab, Palestinian, Asian, Indigenous, criminalized, surveilled and undocumented, war-torn and harassed mamas gives light to the necessity of stories like these for inspiring deep hope and instructing us towards ways of being in a time of mass grief, polarization and despair.

If there’s one thing we learned from MAMAS, it is that mothering in the face of state violence is a BIPOC feminist reproductive justice issue. People who share their stories are parenting children and loved ones who have been targeted by police violence; helping children and loved ones who have been detained as undocumented immigrants; and aiding loved ones in surviving the harsh conditions of U.S. and Israeli settler-colonialism. In one way or another, they have had the opportunity of loving, mothering, caring and nurturing their loved ones stolen from them — much as transpired over the years with the legacies of enslavement, the foster care-to-prison pipeline, forced sterilizations and Native American boarding schools.

So, this Mother’s Day, let’s commit to joining these mamas and stewards of care who are fervently opposing and resisting entrenched state violence and injustice globally, from the streets of Chicago to the cities and villages of Palestine.

This Mother’s Day, like most Mother’s Days, there will be no scarcity of touching corporate images of mothers going on picnics with their children, planting flowers and receiving gifts from loved ones. But what if your every breath exists on the other end of this commercialized, capitalist holiday?

This Mother’s Day, let’s affirm substance over crass commercialism with a commitment to mother-survivors of state violence across the globe, and anyone and everyone who cares for others and strives to love in the face of state violence, as well as anywhere people are deprived of the privilege of celebrating mothering with their loved ones.

This Mother’s Day, let’s insist that anyone who cares about mothering take seriously the ways prisons, war, colonization and immigration bans impact BIPOC individuals who mother — compromising, interfering and robbing them of that Mother’s Day hug or sharing smiles and laughter in the flesh.

On this Mother’s Day, let’s shift our focus to people who spend their Mother’s Days without dinner with their loved ones, but instead, as we saw in Chicago this week, rallying in front of Gov. J.B. Pritzker’s home demanding that the state set their loved ones free by signing the long overdue clemencies on his desk, decarcerating and reuniting mothers and their loved ones separated by the violence of long-term incarceration. And let’s join them by making noise, marching in the streets and growing the people power necessary to dismantle all of the systems of white supremacy combined — colonization, war, border control and prisons.

On this Mother’s Day, let’s pay tribute to mothers in colonized Palestine who are defending their lands and homes, and who in this very moment in the Jerusalem neighborhoods of Sheikh Jarrah and Silwan are striving to protect their children, neighbors and communities in the face of forced evictions from their homes and being thrown onto the streets by the Israeli apartheid state.

On this Mother’s Day, let’s not forget the mothers who are crossing the U.S.-Mexico border with their children in order to survive devastated economies induced by U.S.-led militarized neoliberalism, but who are being met with grave violence — from forced sterilizations to sexual assault and dehumanization by U.S. Border Patrol.

On this Mother’s Day, let’s not erase the harsh and cruel realities that many BIPOC who mother face. Instead, let their stories serve as a reminder that far too many mothers like Cynthia Soto’s mother and aunt were removed from their families by U.S. policies that force Native American children into boarding schools; or Sameera Shalaldeh Khattab, mother of Ata Khattab; or Lourdes Gonzalez, mother of Jesus Alberto “Beto” Lopez Gutierrez.

Many of them will not spend Mother’s Day with their loved ones. And, of course, there are the many people who are mothering and are themselves incarcerated by a U.S. prison system that remains brutally racist, disproportionately locking up BIPOC and Brown and Black immigrants. Let’s remember those who are denied the possibility of birthing, or harmed while birthing while incarcerated. These people, too, have their capacity to experience relational care, nurturance, love and support obstructed or taken away from them by the state.

The power of the state to break bonds between families, chosen families and loved ones cannot be forgotten this Mother’s Day. That power, instead, must be contested. With expanded police violence, militarism, land theft, border control and their devastating effects that ripple down into the intimate spaces of family, home, neighborhood, community and relations, this is no time for any of us to turn our backs.

So, on this Mother’s Day, let us uplift and grow the places for healing that live underneath the superficial and corporatized professions of love. And let us return to love, a love that moves us to nurture the wounds to be healed in our families and communities; a love that moves us to boldly address injustice in our world as an act of love essential to the future we want; a love that grows the power of the collective, and the urgency of mutual aid and support; a love that cannot be separated from the radical potential of revolution, abolition and decolonization.