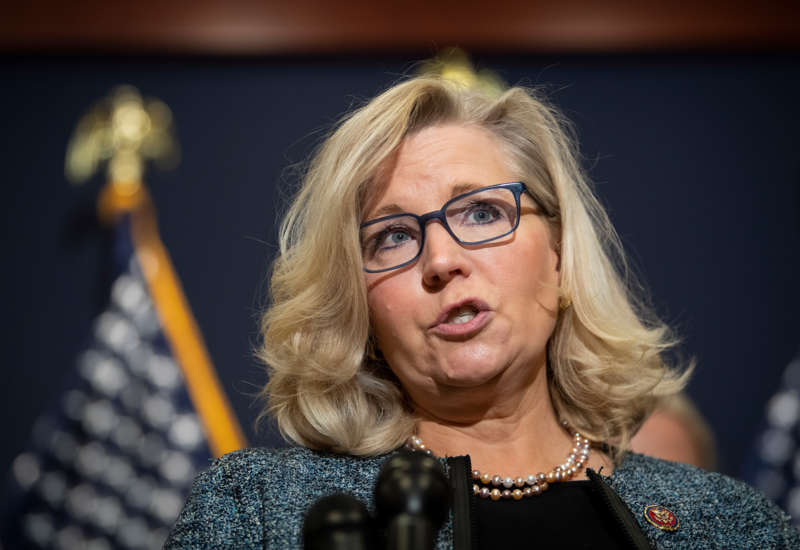 While rewatching the third installment of Christopher Nolan’s Dark Night Batman series this weekend, a moment jumped out with palpable familiarity. A well-armed junta under the command of arch-fiend Bane had taken control of the city of Gotham, setting up kangaroo courts where everyone is guilty the moment they set foot in the room. Even some of the bad guys find themselves facing judgment, with one sputtering, “But… but I’m one of you!”

Only two sentences were available in this court: death or exile. Death was straightforward. Exile involved being forced to cross the thin river ice that surrounded the winter-bound city. None survived exile; the ice devoured all comers. When Police Commissioner Jim Gordon is presented before this court, he defiantly chooses death rather than face the elongated humiliation of the river. The judge was nonplussed. “Death,” he pronounced as he brought down the gavel, “by exile.”

The parallel was instantly evident: Rep. Liz Cheney! A once-prominent member of the junta formerly known as the Republican Party, which is now controlled by a cult leader with an unquenchable thirst for vengeance against whomever and whatever presents itself, Cheney has found herself on the far side of those who once championed her squalid family name.

Her father, one of the more obvious war criminals in U.S. history and a force for decades within the party, has been equally excommunicated from the hearth of the faithful. Former Vice President Dick Cheney no longer holds elected office, however, while his daughter is currently the third-ranking GOP official in the House.

“The top Republican in the House on Sunday publicly endorsed the ouster of Rep. Liz Cheney from the party’s leadership team,” reports The Washington Post, “paving the way for Cheney’s removal as early as this week and sending a clear message that allegiance to former president Donald Trump is a requirement to hold power in the GOP. House Minority Leader Kevin McCarthy threw his support behind Rep. Elise Stefanik (N.Y.) to become the new Republican conference chair, the No. 3 job in GOP leadership.”

Why? What would motivate the GOP to immolate the political career of one of its more prominent up-and-comers? Cheney has faithfully adhered to the ghastly codex of modern Republican morality with grim enthusiasm over the years, but in the age of Trump, the only loyalty that matters is your loyalty to him.

Because Cheney voted to impeach Trump after he incited his supporters to sack the Capitol, and because she refuses to peddle the fiction of a stolen 2020 election, Trump has commanded she tread the ice. She is not the only one who has aroused his ire, but at present, she is the entrée in this festival of retribution.

Cheney has faithfully adhered to the ghastly codex of modern Republican morality with grim enthusiasm over the years, but in the age of Trump, the only loyalty that matters is your loyalty to him.

If the reporting holds, Cheney’s moment of “death or exile” is coming on Wednesday, when the House returns to session. House Minority Leader Kevin McCarthy, one of the more astonishing lickspittles in the annals of this age, is using Cheney as a meat shield to protect himself from the fact that he also denounced Trump after January 6, though he did not vote to impeach. That fact may be the only reason he still has a job.

Imagine living every day in fear that Trump might remember something about you, or be reminded of something about you by some aide with an ax to grind or a friend to promote. That’s McCarthy’s whole existence today, and it is altogether pathetic.

McCarthy hopes he will become speaker if the GOP retakes the House in ’22, but 40 miles of bad road lie between this moment and that outcome. “Some advisers are urging Donald Trump not to support McCarthy for Speaker if Republicans flip control of the House next year,” reports Politico. “Trump, who has been angry McCarthy helped defend Cheney’s role as conference chair in late February, is interested by the idea.”

Cheney’s current plight stands as one of the more bizarre transmogrifications in the history of modern politics. For years, she was relentless in her pursuit of the worst elements of Republican “ideology:”

During the Obama administration, Cheney was a Fox News regular who, as was the fashion at the time, insisted that the president was secretly sympathetic to jihadists. She enthusiastically defended the use of torture, dismissed the constitutional right to due process as an inconvenience, and amplified the Obama-era campaign to portray American Muslims as a national-security threat.

Unfortunately, Cheney and her allies won their earlier fight for the soul of the party. During the Obama era, the Republican Party became ever more hostile to the fundamental rights of religious and ethnic minorities, and ultimately chose Donald Trump, a man who attacked those rights as an existential threat to the nation, as its leader.

Cheney’s courageous stand against the party of Trump is a stand against a party she helped build, a monster she helped create. The tragedy is not that she might suffer for her folly, but that American democracy will. Her latter-day epiphany is welcome, but it also comes far too late.

Even Maureen Dowd, The New York Times champion of D.C. insider snark, laid Cheney low in a blistering Saturday column: “Trump built a movement based on lies. The Cheneys showed him how it’s done.” Boom, thanks for playing, turn out the lights when you leave.

Now that her entire political career is trembling on the verge of extinction, Liz Cheney has recast herself as a sort of Joan of Arc character, a doomed victim of nefarious forces she has vowed to keep fighting. The fact that those forces have “Made By The Cheney Family” stamped on their bootheels is but an accent in the symphony of hypocrisy that is consuming the GOP.

The loss of her position within the party is all but a foregone conclusion. Cheney’s next task will be to see if her district in Wyoming, long a Cheney-GOP stronghold, will vote her out of office entirely next year. By every indication, Trump intends to make retaining her seat as difficult as possible, as he moves to purge the ranks of any and all who dare to offer less than seamless fealty to the scattered, violent nihilism that is now his brand.

“History is watching,” Cheney wrote in a recent opinion piece that still managed to single out “wokeness” as a threat commensurate to Trump. “Our children are watching. We must be brave enough to defend the basic principles that underpin and protect our freedom and our democratic process. I am committed to doing that, no matter what the short-term political consequences might be.”

History has been watching for a while, Liz, and you are no hero. Train a pack of dogs with violence, ignorance and hunger, and they will turn and tear you to pieces sooner or later. For Cheney, it is sooner, and the ice beckons. Nothing on Earth can compel me to root for a Cheney, but I will be watching to see what she can do to prevent the monstrous party she helped make from eating itself.