Sanders Warns Biden Against Pushing Too Hard for Bipartisanship With Republicans 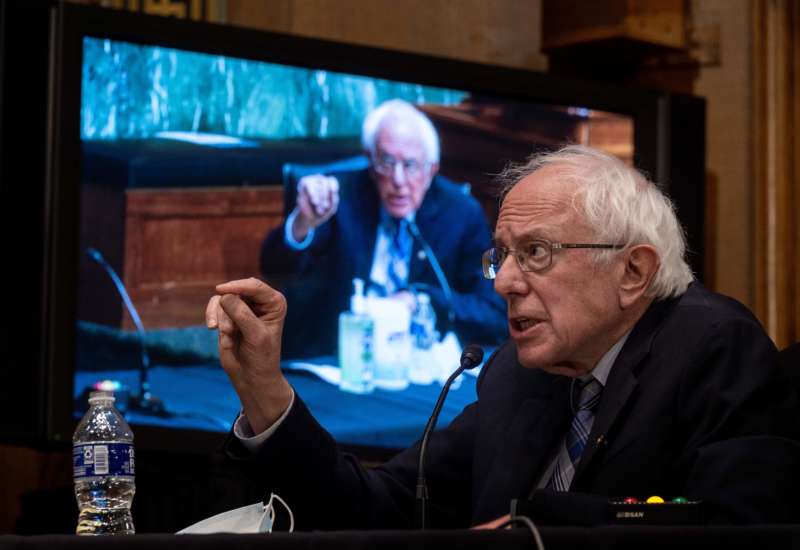 Vermont independent Sen. Bernie Sanders rejected the idea of waiting for Republicans to come around to accept President Joe Biden’s proposed infrastructure package, noting that voters don’t care about bipartisanship as much as people in Washington think they do.

Speaking during an interview on the program “Axios on HBO,” Sanders was questioned about comments from Steve Ricchetti, who currently serves as counselor to the president in the Biden administration. Ricchetti has suggested that there’s still time for Democrats and Republicans to strike a deal on the infrastructure package, a notion that Sanders contended with.

“In general I don’t agree with that. The bottom line is the American people want results,” Sanders pointed out.

The Vermont senator used recent events to prove his point, noting there wasn’t much outrage over the COVID economic relief bill, which passed without a single Republican vote and among other things, provided stimulus checks for most American adults.

“Frankly, when people got a, you know, $1,400 check or $5,600 check for their family, they didn’t say, ‘Oh, I can’t cash this check because it was done without any Republican votes,’” Sanders quipped.

Compared to the economic stimulus bill, the White House has acted with less urgency on its proposed infrastructure package, which has been split into two distinct parts: one dealing primarily with what many view as “traditional” infrastructure policy (such as funding for repairing roads, rail, broadband internet, and more), and another bill providing much needed aid to American workers and their families, in the form of free preschool for 3- and 4-year-olds, two years of free community college, and a paid leave program for every worker in the U.S.

In taking its time with the infrastructure package, the Biden administration is hoping to strike a deal with Republicans to give the appearance of a cooperative spirit, a move that will likely water down many of the proposals Biden has made, especially those put forth by progressives.

“I’m prepared to negotiate as to the extent of my infrastructure project as well as how we pay for it,” the president said in April.

But while Biden is hoping to have bipartisan support for the bills he has proposed, he also seems wary of waiting too long, and has suggested he will move forward without Republicans if all they can offer him is obstruction. There appears to be a timeline for how long Biden will wait, as White House Press Secretary Jen Psaki has said the president wants to see bipartisan progress on the bill by Memorial Day so that the infrastructure bills can get passed sometime this summer.

The Biden administration has also tried to redefine what bipartisanship really means, seeing it less as lawmakers from two parties in Washington coming together to pass a bill and more as getting a wide coalition of voters to support the proposals.

Polling has shown that Biden’s plans on infrastructure do appeal to most Americans, with nearly three-in-five voters (58 percent) in a recent Politico/Morning Consult poll supporting the part of the package that deals with improvements to child care, paid leave and education.

There is also significant bipartisan support among Americans when it comes to funding the other half of the administration’s infrastructure package. Indeed, a majority of both Democrats and Independents, as well as nearly one-third of Republicans (32 percent), voiced support for how physical infrastructure projects across the country are to get funded — through raising taxes on those earning over $400,000 per year and making modest increases on taxes for corporations.