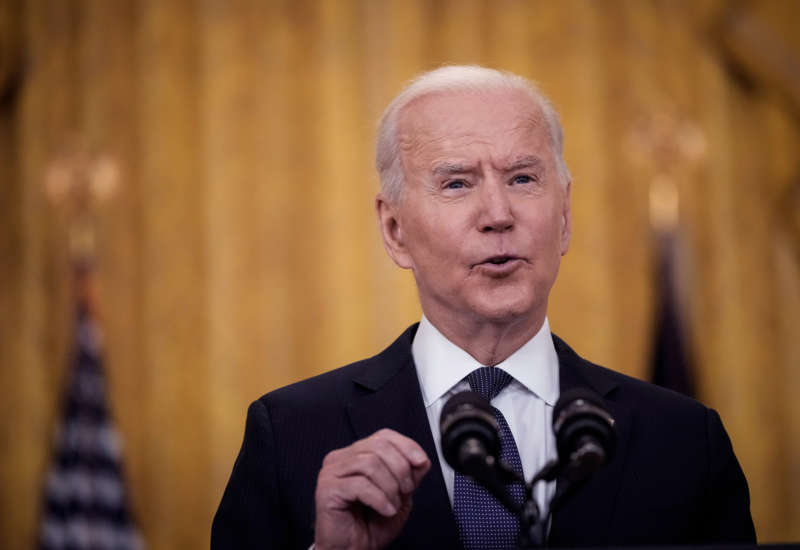 The Justice Department last week released a list of 17 new immigration judges, who decide whether to grant asylum claims or deport migrants. “The 17 new immigration judges referenced in the notice all received their conditional offers under the prior administration,” a DOJ spokesperson told The Hill, despite President Biden’s vow to undo his predecessor’s damage to the country’s immigration system.

Trump cut funding to the immigration courts during his four years in office and limited how much control immigration judges have over their own dockets, barring them from allowing migrants with pending cases to remain in the country indefinitely. His administration also launched an aggressive enforcement strategy at the border and reopened hundreds of thousands of low-priority cases that had been deferred under the Obama administration, resulting in a backlog of 1.3 million cases by the time Trump left office.

Nearly all the judges on the Justice Department list have backgrounds as prosecutors or as counselors at Immigration and Customs Enforcement (ICE), while nearly none have any experience defending migrants.

Ben Johnson, the executive director of AILA, said the DOJ’s “bias towards hiring the same profile is obvious and extremely disappointing.”

“It is a threat to the pursuit of fairness and justice and an insult to the fundamental principles of our system of justice,” he said on Twitter.

Even former immigration judges were surprised by the hires made under new Attorney General Merrick Garland.

“This is a list I would have expected out of Bill Barr or Jeff Sessions, but they’re not the attorney general anymore. Elections are supposed to have consequences,” Paul Schmidt, the former chairman of the Board of Immigration Appeals who spent more than two decades as an immigration judge, told The Hill. “No one on that list is among the top 100 asylum authorities in the country, and that’s the kind of people they should be hiring — not prosecutorial retreads.”

The Biden administration is continuing a trend that began or accelerated under Trump, when two-thirds of the 520 seats the administration filled went to former ICE officials, according to The Hill.

“You can’t just have judges that were former prosecutors,” Peter Markowitz, a professor at the Cardozo School of Law at Yeshiva University, told The Hill. “We need former defense attorneys and other actors in the legal system represented on the bench as well.”

Trump’s impact on immigration courts was evident as his administration cracked down on asylum claims from those fleeing persecution and violence. The asylum rejection rate climbed from around 50% under past administrations to more than 70%.

The Justice Department has pushed back on concerns from immigration advocates alarmed that the new slate of judges would continue the trend. A DOJ spokesperson told The Hill that it “takes seriously any claims of unjustified and significant anomalies in adjudicator decision-making and takes steps to evaluate disparities” and that the department “continually evaluates its processes and procedures to ensure that immigration cases are adjudicated fairly, impartially and expeditiously and that its immigration judges uniformly interpret and administer U.S. immigration laws.”

But Schmidt argued that diversifying the court appointments would have a larger impact.

“You need to get some progressive immigration experts into the system who recognize what good asylum claims are who can establish precedent for granting cases and then move those cases through the system,” he told the outlet. “I haven’t seen much evidence to back up their initial claim they want to be fair and just to asylum seekers. It’s just Stephen Miller Lite.”

Immigration judges have warned that “the system is failing” for years. Many asylum seekers have been forced to stay at detention centers while others may spend years waiting for their cases to be adjudicated, often without legal representation. An even larger issue, however, is that immigration courts are not really courts and immigration judges are not really judges. Rather, immigration courts are part of the Justice Department, and its judges are effectively attorneys employed by the DOJ’s Executive Office for Immigration Review.

“It’s hard to imagine a more glaring conflict of interest than the nation’s top law-enforcement agency running a court system in which it regularly appears as a party,” The New York Times editorial board wrote over the weekend, noting that immigration judges “operate at the mercy of whoever is sitting in the Oval Office.”

The editorial board called on Congress to take immigration courts out of the DOJ and make them independent administrative courts similar to those that handle bankruptcy and tax issues, an idea long backed by the Federal Bar Association.

While the DOJ has asked Congress for more funding to staff the immigration courts, the Times editorial board urged the administration to tackle the massive backlog by immediately removing up to 700,000 cases involving low-level immigration violations from the docket and focusing instead on a “small number of more serious cases.”

“If there’s any silver lining here, it is to be found in Mr. Trump’s overreach,” the editorial board wrote. “The egregiousness of his administration’s approach to immigration may have accelerated efforts to solve the deeper structural rot at the core of the nation’s immigration courts.”