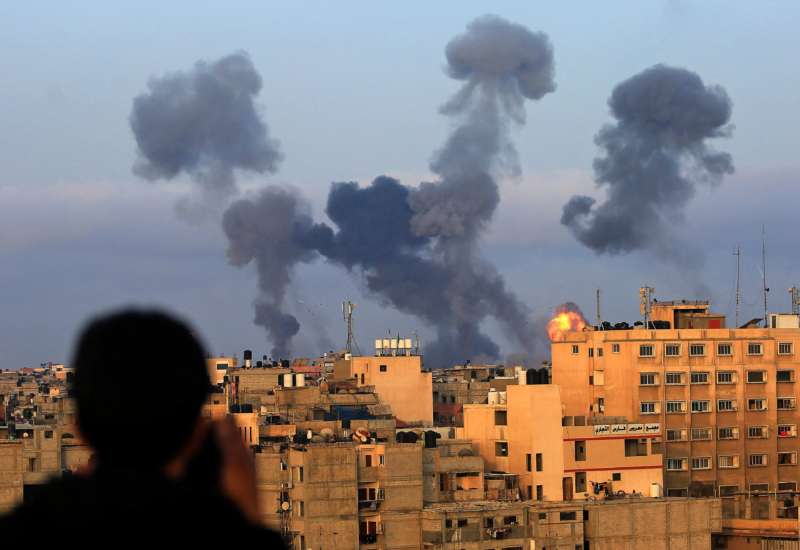 “Unlike Israel, missile defense programs, such as Iron Dome, don’t exist to protect Palestinian civilians,” she added. “It’s unconscionable to not condemn these attacks on the week of Eid.”

The latest intensification of violence follows weeks of protests over settler and Israeli state forces’ attempts to expel Palestinians from their homes in the Sheikh Jarrah neighborhood of occupied East Jerusalem.

Hamas said it fired rockets into southern Israel Monday in retaliation for the over 300 Palestinians injured by rubber bullets, stun grenades, and tear gas at the site known to Palestinians as al-Haram al-Sharif.

Describing Israeli forces’ attack on Monday, Nour Mtour, a Palestinian who spent the night inside the Al-Aqsa Mosque, told Al Jazeera, “Snipers went on the roof of the gate at the mosque compound and began to shoot rubber bullets at everyone — women, men, everyone.”

At the al-Aqsa mosque, Palestinian youth gathered sponge rounds, tear gas canisters, and stun grenades that Israeli forces fired at them today and created a model of the Dome of the Rock. At the top, they wrote, لن تمروا — “You will not pass.” pic.twitter.com/oRbnlJG3NG

The Palestinian Red Crescent Society said it was denied access to treat the injured inside and that members of its team had been targeted.

In a speech Monday for Jerusalem Day, a holiday marking the day Israel annexed the eastern part of the city in the 1967, Netanyahu said that “the terror organizations in Gaza have crossed a red line.”

“Israel will respond with great force. We will not tolerate attacks in our territory, our capital, citizens, and soldiers,” he said. “Whoever attacks us will pay a heavy price.”

A further escalation appeared to be underway, with Israel Defense Forces saying in a tweet Monday that it had “now struck numerous Hamas terror targets in Gaza.”

In response to the uptick in violence, the United Nations Security Council held an emergency meeting on Monday.

The United States, according to one diplomat, said in the closed-door video conference that it was “working behind the scenes” to calm the situation and that it was “not sure that a statement at this point would help.”

The Security Council meeting came after the U.S. national security adviser, Jake Sullivan, telephoned his Israeli counterpart and voiced “serious concerns” about potential Israeli evictions of Palestinians in the holy city that have helped fuel tensions…

The draft Security Council statement, seen by AFP, would call on Israel to “cease settlement activities, demolitions, and evictions” including in east Jerusalem.

Rep. Rashida Tlaib (D-Mich.), who is Palestinian-American, took to social media to denounce the attacks on the Muslim holy site and urged the Biden administration as well as her fellow members of Congress to take decisive action.

“American taxpayer money is being used to commit human rights violations,” said Tlaib. “Congress must condition the aid we send to Israel, and end it altogether if those conditions are not followed.”

Mohammed El-Kurd, a writer and poet whose family lives in Sheikh Jarrah, also urged the White House to take action far beyond a statement.

“We welcome all of the international condemnations that we are seeing from countries, be it the United States or otherwise, but we want more than just condemnations. We want Israel to be held accountable for its crimes against Palestinians,” El-Kurd told Democracy Now! Monday.

“The Biden administration and the language of a false equivalency continue to uphold this occupation. I think you can deescalate the situation and the tension and the violence in Jerusalem by ending the occupation,” he continued. “That is the only solution.”