We Can’t Just Tell People to “Go Back to Work.” We Have to Improve Workplaces. 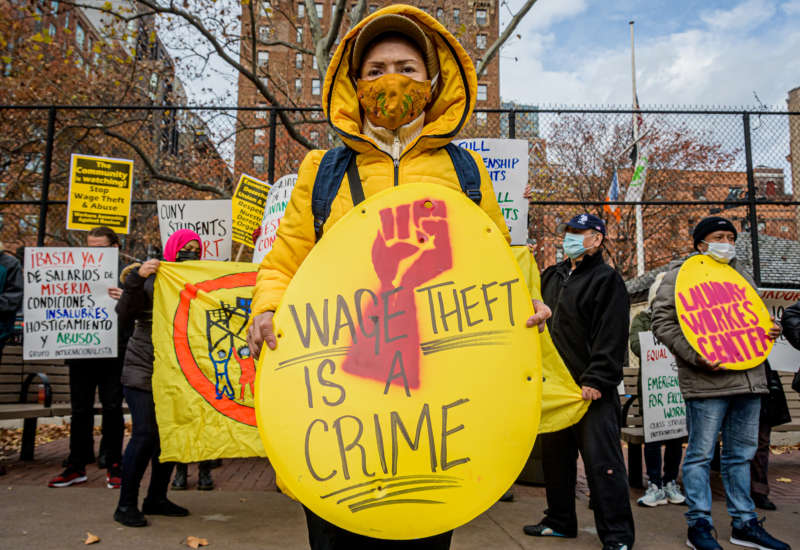 Republicans never need a good excuse, or even a bad one, to stiff working people and the poor. Doing so has been their calling card for generations, their reason to get up in the morning. Less money for workers equals more profits for bosses: So simple that even Louie Gohmert could understand it, and piffle to mucky old morals. As Bob Dylan once said, money doesn’t talk, it swears.

The latest jobs report landed with an unimpressive thud last Friday, and the phenomenon reared its gilded head once again. The report, which detailed a modest hiring boost of 266,000 new jobs, was a surprising disappointment after so much money had been supercharged into the economy by way of stimulus checks and other vital benefits. “However,” reported CNBC, “markets had only a mild reaction to the bad news, a sign that investors expect the Federal Reserve to keep its ultra-easy policies in place and believe that the big miss likely was a short-term phenomenon.”

Republicans who had been giving the big old hairy eyeball to all that stimulus cash flowing to the people, on the other hand, suddenly had new reason to live. Benefit money makes people not want to work! It is stripping the populace of the drive that beats in the heart of all true Americans! This is an enduring racist and classist trope, one that never seems to be applied to the idle children of the ultra-wealthy, but I digress.

By last weekend, the stampede was on. “An unexpected slowdown in hiring nationwide has prompted some Republican governors to start slashing jobless benefits in their states, hoping that the loss of generous federal aid might force more people to try to return to work,” reported The Washington Post. “The new GOP cuts chiefly target the extra $300 in weekly payments that millions of Americans have received for months in addition to their usual unemployment checks…. Republican policymakers have long opposed these heightened unemployment payments and unanimously voted against extending them earlier this year.”

Many Democrats and economists believe this latest jobs report is an aberration, an anomaly that does not represent the economic growth to come. People are still spooked by COVID and not quite ready to charge back to waiting tables at the crowded restaurant or driving a register at a packed retail store. Only half the country has been vaccinated, and a significant portion of the other half is going to need convincing before accepting the spike. That vaccination gap is also feeding the employment hesitance of millions.

Lots of folks who have spent the last year in a defensive crouch have also been reconsidering their options over that time. “There is also growing evidence — both anecdotal and in surveys — that a lot of people want to do something different with their lives than they did before the pandemic,” reports the Post. “The coronavirus outbreak has had a dramatic psychological effect on workers, and people are reassessing what they want to do and how they want to work, whether in an office, at home or some hybrid combination.”

Unfortunately, one of those who appears to be listening to hollow Republican economic platitudes in this matter is the president himself, who is no stranger to the lure of right-leaning neoliberal thinking when it comes to financial matters. “We’re going to make it clear that anyone collecting unemployment, who was offered a suitable job, must take the job or lose their unemployment benefits,” Biden said on Monday. “We don’t see much evidence of that.”

After this past year, people want that work to be more than a dreary ordeal of basic survival. We can do that.

Mitch McConnell may as well have said this. Imagine for a moment you’re a 22-year-old restaurant worker who has been unemployed and homebound since March 2020. All that has kept you afloat have been those stimulus checks and the enhanced unemployment benefits that are now under attack. Now that things are opening up, the only job you can get at the moment is at your old place, where the owner can fire you if you looked at them wrong, where the manager and customers sexually harassed you as part “restaurant culture,” and where COVID precautions barely exist.

You’d rather drink paint that go back to that job, where conditions started out bad and deteriorated over the past year. However, if you don’t, no lesser light than the president says you could lose half your absolutely needed unemployment benefits, just because you think you deserve better. After all, that old job is perfectly “suitable.” Biden has shown that he is able to be moved on policy. In this, one hopes a trusted adviser gets in his ear with a megaphone and a tall glass of basic humanity.

This tension between bosses and workers, between capitalism and sustainable existence, put many COVID victims in the ground over the last year. This permanent push to “open up” and “get back to normal” was, and remains, nothing less than capitalism demanding that the workers be stuffed back into their roles regardless of the peril. This venomous profit motive stands above all other priorities, and it got a lot of people killed by way of hasty anti-science “re-openings” that rang a dinner bell for the virus.

Now, however, we appear to stand upon a moment when workers may well have the upper hand. Multiple industries, most notably restaurant and retail, are involved in the Chamber of Commerce’s stampede to cut unemployment benefits and speed workers back into the workplace.

What if those workers didn’t go?

What if those millions of workers who have had a year to think about it believe they deserve better?

What would the average retail or restaurant worker like to see change? Nothing that would crack the mantle of the Earth, to be sure. Hannah B. from New Mexico, a retail and restaurant worker for going on two decades, compiled for me a short list of expectations:

– Pay workers properly. No more restaurant jobs paying $2 an hour plus tips or retail jobs that pay nowhere near a living wage.

– Provide paid sick time. (Workers often have to come to work with the flu, bronchitis, colds or strep, or risk losing their job.)

– Provide a set schedule with two days off in a row…. Retail and restaurant worker schedules change radically from week to week, making it virtually impossible to plan a coherent family existence.

– Make it possible to get a raise. There’s no incentive to work somewhere if this isn’t on the table.

– Protect employees from mistreatment by customers and other staff.

Check those boxes, and there will be a stampede of workers flooding the current job openings. Most everyone wants to work, despite the belittling racist philosophy of Republican corporatism. After this past year, many people want that work to be more than a dreary ordeal of basic survival at an utterly unsustainable wage. We can do that.

CNN Refuses to Apologize to Joe Rogan Over Ivermectin Smear

CNN Refuses to Apologize to Joe Rogan Over Ivermectin Smear