For Eid, Let’s Celebrate the Queer and Trans Muslims Working Toward Abolition 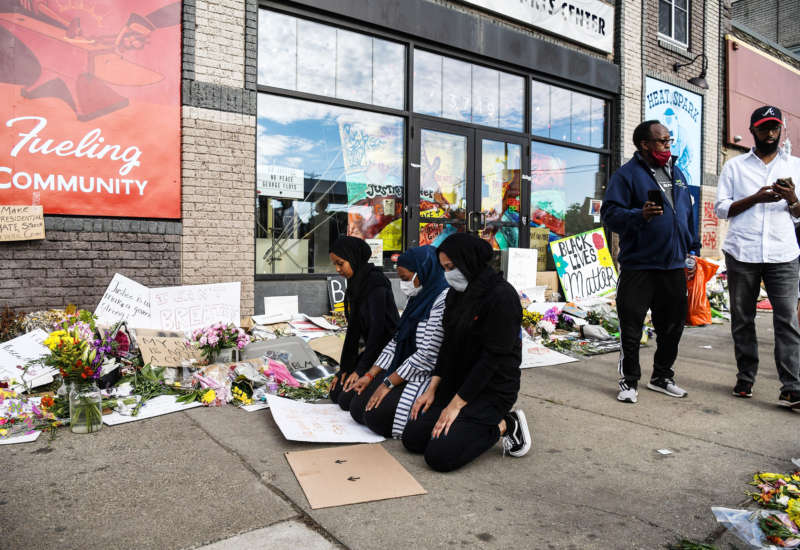 This Ramadan has been a difficult one for many Muslims. In the U.S., police have continued to murder Black people, interpersonal violence has targeted trans women of color and Asian women, and a rash of legislation has targeted trans youth and Black voters and protesters. Israeli violence against Palestinian people in Sheikh Jarrah, Al-Aqsa Mosque and Gaza has escalated. In India, COVID-19 deaths have surged.

It is a moment that calls us to organize toward abolition — the dismantling of systems that incarcerate, surveil, police and punish, and the creation of systems that meet people’s needs and support accountability and change — more than ever.

Now, as Muslims around the world celebrate Eid ul’Fitr and mark the end of the Ramadan, many of us are also reflecting on our collective efforts to help others. During this time of reflection and celebration, I am excited to lift up the efforts that Muslims in queer and trans communities are engaged in to create a just world free of police, prisons and punishment.

One doesn’t need to look far to see the commitment to abolition among some U.S.-based queer and trans Muslim organizations and leaders. Masjid al-Rabia, a mosque and Islamic community center in Chicago, mobilized volunteers to send care packages to incarcerated LGBTQ+ Muslims this Ramadan.

The lived experience of being a queer or trans Muslim deeply informs people’s commitment to abolition.

Not everyone agreed with me about a pattern — one pointed out that many queer and trans Muslims have not yet arrived at an abolitionist outlook, and several explained that their abolitionist efforts during Ramadan are simply a continuation of what they do every month of the year. But what did emerge was a holistic vision of abolition that unifies the personal, political and spiritual.

This Ramadan, Mirna Haidar visited their cousin in prison in Lebanon. Mirna, who lives in New York and serves on the MASGD steering committee, goes back to Lebanon to visit family when she can. But they had never met this cousin before. He has been incarcerated for 25 years, most of Mirna’s life, and it has been hard for the family to maintain contact. “It was just too jarring to see him behind those bars, and see the condition he was in… I offered what support I could,” Mirna said. Other family members also felt moved to reconnect with him this Ramadan, and Mirna is compiling family contact information to send to him.

Visiting a family member in prison may not be what everyone imagines abolitionist work to look like. But Mirna explains that meeting people’s immediate needs — acknowledging and supporting their humanity — is part of an abolitionist approach. “Until abolition, insh’allah, we cannot be selfish with our asks,” she said. “There are people who are currently incarcerated who want halal iftar meals. Those things matter. Being in touch with incarcerated folks and demanding things for them — that is not reform. That is abolition.”

Like Mirna, Malik Johnson, who works with incarcerated LGBTQ+ Muslims, named relationships with others as a central to abolition. “For me, abolition is in the fabric of our lives,” he said. “So, it’s not something that you do or that you have to try to get. Meeting kindness with kindness, meeting even adversity with kindness — for me, that’s abolition.”

When I asked Johnson about common requests of incarcerated LGBTQ+ Muslims, he reflected that they were often quite simple — a prayer rug, a Quran — but not always easy to realize. Many want someone “to communicate with on a long-term basis…. What they’re requesting really is a best friend.”

Organizers of a queer Muslim abolitionist Ramadan reading group developed and worked through a syllabus on Islamic, queer and feminist approaches to conflict and harm; the impact of policing and incarceration on Muslims; and other abolition-related topics. “For me personally, abolition is also about examining how I navigate the world and engage with harm that I witness, endure and cause, and how to navigate the aftermath of harm in a way that centers healing, growth and accountability,” Firza*, one of the organizers, said. “It has been so helpful to do this syllabus with others, especially with folks with varying life experiences and relationships to abolition and prisons.”

Serena W. Lin, another organizer of the reading group, agrees. “People don’t know how to imagine a world without incarceration,” Lin wrote, suggesting that different ways of thinking related to both Ramadan and COVID-19 might help.

Muslim Justice League hosted an Abolition at the Iftar Table event this Ramadan. Jordan Jamil Ahmed, community organizer of the Muslim Justice League, pointed out that even when organizations and events are not explicitly queer- and trans-led, “many of us working behind the scenes … are a part of the queer community and are invested in abolitionist values.” Malek Ansari*, who attended the event, said it was “wonderful,” and helpful in thinking about how to have “intentional conversations with loved ones about abolition.”

Masjid al-Rabia, MASGD and Muslim Justice League have also been collaborating with a fourth organization, Reconstructed, to build community and work toward abolition this Ramadan. Reconstructed, a creative magazine and conversation space for all Muslims, is well-positioned to do this work since, as the organization points out, “abolition is inherently creative and imaginative work.”

But queer and trans Muslims are also organizing for abolition in many other ways, all year round. Mirna has worked to stop military recruitment in New York City-area schools. They note that some people seem to think of the military as separate from law enforcement, but “as a war survivor, I don’t see that separation.”

Ansari, lead co-coordinator of MASGD and board executive member of Trans Lifeline, educates people about abolition through the Defund Chicago Police Department campaign, and researches the impact of policing on marginalized Chicagoans.

Throughout the year, Muslim Justice League works to end the Countering Violent Extremism program and defund the police in the Boston area. MASGD has held trainings on legal rights and first aid for protests, and Masjid al-Rabia has held events connecting incarcerated LGBTQ+ Muslims with pen pals and facilitated support groups for Muslims recovering from or exploring harm reduction related to substance use. Reconstructed amplifies the creative work or currently and formerly incarcerated people, as well as those targeted by police.

When I asked people about why they supported abolition, many had answers rooted in their faith. Ansari said, “To me, abolitionist work is a form of worship and following the principles of Islam, a religion that was founded on questioning existing systems that haven’t served us.”

Johnson commented on the prophetic example of Jesus responding to harm. Mirna, who defines abolition as “accountability without incarceration,” discussed the importance of recovering histories of how Muslim communities responded to conflict and harm prior to colonization. She added, “Since I was a kid, Ramadan was all about thinking about others, and being inclusive of people who cannot join you at the iftar table.” Reconstructed shared the following saying of Muhammad (may peace be upon him), which they note is an “anchoring sentiment” for their work: “Feed the hungry, visit the sick, and set free the captives.”

The lived experience of being a queer or trans Muslim deeply informs people’s commitment to abolition. Ansari grew up as queer nonbinary Muslim in a community of refugees and immigrants. “Having that perspective has allowed me to see how policing played a central role in enforcing assimilation to survive,” they commented, going on to outline a vision for abolition “where youth are more connected with the older generation, where all of us know how to plant or grow our own food locally, and where work is not a precursor to accessing the resources we need to survive and thrive.”

Firza noted, “Queer and trans Muslims are not a monolithic population, but there is a shared experience that understands the threat (and unfortunately, oftentimes the lived experience) of violence and punishment simply for being who they are…. I am committed to building community that values growth and does not dispose of anyone.”

Ahmed agreed, asking, “How can I seek support and alliance from other folks if I am not also showing up for those who experience even more intolerance or violence or degradation?”

Perhaps all of this is why, as Firza puts it, “Studying prison abolition during Ramadan feels like one of the most Muslim things I’ve ever done during Ramadan.”

*They asked to use a pseudonym for privacy and safety.