As Israel’s Attack Mounts, Biden Says It’s “Not Been a Significant Overreaction” 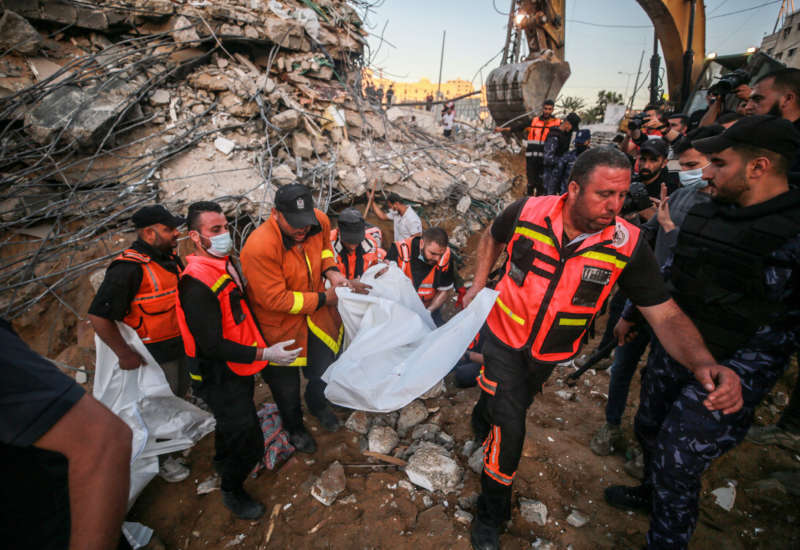 U.S. President Joe Biden said Thursday that he doesn’t believe Israel’s onslaught against the besieged Gaza Strip this week has been a “significant overreaction,” remarks that came shortly before the Israeli military escalated its assault on the densely populated territory with air and artillery attacks involving nearly 200 war planes, tanks, and brigades of ground troops.

Biden is facing growing calls from U.S. lawmakers to speak out forcefully against Israel’s bombardment of residential buildings and killing of children with airstrikes, but the U.S. president has thus far refused to heed such demands, issuing broad statements stressing his “unwavering” support for Israel’s right to self-defense as the Palestinian death toll continues to climb.

Speaking to the press on Thursday, Biden pointed to his conversation with Israeli Prime Minister Benjamin Netanyahu and the findings of the U.S. intelligence community to justify his position that Israel’s conduct in Gaza has thus far been a reasonably proportionate response to Hamas rocket attacks — which began after Israeli police raided the Al-Aqsa mosque compound, wounding hundreds of Palestinians.

President Biden: “One of the things that I have seen thus far is that there has not been a significant overreaction” from Israel https://t.co/5ZO3934r2i pic.twitter.com/Wxgckf9KNv

Hours after Biden’s comments, Israel added three brigades of ground troops to its air offensive in Gaza, further endangering civilians living in what has been described by Palestinians and human rights advocates as the world’s largest open-air prison.

Israel’s intensifying air and ground attacks on the Gaza Strip came as U.S. members of Congress took to the floor of the House of Representatives to voice solidarity with the Palestinian people as they face both the immediate threat of airstrikes and the constant dehumanization inflicted by an apartheid regime.

The lawmakers stressed that by providing funding to the Israeli military and unquestioning support for its actions, the United States is and has long been complicit in the abuse and murder of Palestinians who have been denied basic rights and dignity for decades.

Powerful words from @AyannaPressley: “We cannot remain silent when our government sends $3.8 billion of military aid to Israel that is used to demolish Palestinian homes, imprison Palestinian children, and displace Palestinian families. A budget is a reflection of our values.” pic.twitter.com/R8twLfyIpS

Biden administration officials have insisted that they are working with Israel and others in the region to deescalate the ongoing violence, but the U.S. in recent days has repeatedly blocked the release of a United Nations Security Council statement calling for a ceasefire, something the Israeli government has rejected.

“Israel is not preparing for a ceasefire,” Israeli Defense Minister Benny Gantz said Wednesday. “There is currently no end date for the operation. Only when we achieve complete quiet can we talk about calm.”

As the Associated Press reported Friday morning, “Israel has massed troops along the border and… launched more than 600 airstrikes, toppling at least three high-rise apartment buildings, and has shelled some areas with tanks stationed near the frontier.”

From our colleague on the ground in Gaza: “My children are completely panicked. It feels like more than 200 bombs are going off at once. The houses are shaking. Building are collapsing on people. The sound of their screams is terrifying.”

The Center for Constitutional Rights, a U.S.-based advocacy group, said in a statement earlier this week that “the United States is complicit in Israeli war crimes and crimes against humanity against Palestinians who, for decades, have been struggling for freedom and the right to remain on their land with dignity.”

“With its unconditional financial, military, and diplomatic support of the Israeli apartheid regime,” the group continued, “the U.S. bears responsibility for the everyday violence of Israeli oppression and belligerent military occupation, and for allowing the Israeli military and security forces to wield deadly force against Palestinians with impunity.”