This Isn’t a Civil War, It Is Settler-Colonial Violence 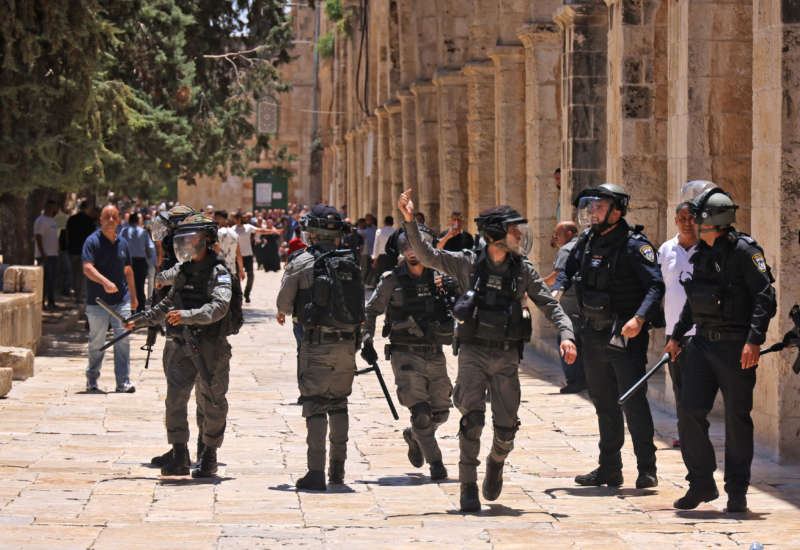 Earlier this week, massive protests erupted in ’48 Palestinian towns and cities. ’48 Palestinians (known as “citizens” of Israel) had mobilized to protest the threat of expulsion facing Palestinian families in Sheikh Jarrah in Jerusalem, and in protest of Israel’s attack on al-Aqsa Mosque.

As Israel escalated its violence against the families in Sheikh Jarrah, worshipers in al-Aqsa mosque during the holy month of Ramadan and in Gaza, ’48 Palestinian protests escalated as well. Palestinians came out in their masses, from the Naqab to the Galilee, in what has become the most widespread protests among ’48 Palestinians in living memory: Rahat, Tal sl-Sabe’, Shkieb al-Salam, Shefa ‘American, Yaffa, Haifa, Akka, Nazareth Lydd, Umm al-Fahem, ‘Ain Mahel, Baka al-Gharbiye, Majd al-Kroum, ‘Arabe, al-Be’ene, al-Zarazir, Ramla, Kufr Kana, Jaljoulye, Kufr Manda, Jdaydet al-Makr, Reine, Mashhad, Kufr Kana, and the list goes on and on. Correspondingly, Palestinians have been met with brute Israeli force.

The protests became particularly violent as Israel escalated its oppression with each passing day. Israel became especially worried with the situation in ’48 Palestinian cities that have mixed Jewish and Palestinian populations. Lydd (Lod) became of special concern for the Israeli government. The recent violence in the city of Lydd has been described by many as “civil war,” including Israeli president Reuven Rivlin and the Mayor of Lydd, Yair Ravivo, who declared that a “civil war has broken out in Lod.” Headlines in the Guardian, Daily Mail, the BBC, and Reuters, to name just a few international media outlets, followed this narrative and framed it as a matter of civil unrest and unfolding civil war.

But the civil war narrative is misleading and plays into Israel’s hands. It masks settler-colonial power relations, settler-colonial violence and Jewish supremacist violence. What we are witnessing are not “clashes,” or between two equal sides, but rather the Israeli settler state together with Zionist militias declaring a war on its colonized “citizens,” who need to protect their lives, homes, and families themselves.

Israel has never tolerated Palestinian mass protests. In Land Day 1976 Israeli police shot dead 6 Palestinians, and thirteen in the October 2000 events that erupted at the beginning of the second intifada. Accordingly, protests in the last few days have been met with extreme levels of police violence. Israeli forces are using stun grenades, gas canisters, skunk water and now also rubber bullets. Protesters are severely beaten, denied medical treatment, and hundreds, including minors, have been arrested and some denied legal representation. Palestinian towns and cities look like a war zone.

The prevailing narrative in Israel is one of loss of sovereignty. Netanyahu referred to it as anarchy. “Without the rule of law,” he said, “there is nothing.” The discourse, thus, became one of restoring order and regaining control. Border police, known for its brutality, were called from the West Bank to be deployed in Palestinian cities and towns. Lydd became the symbol for reclaiming Jewish sovereignty. For the first time since 1966, when ’48 Palestinians were still under military rule, Israel used emergency powers and a curfew was imposed on the city; six army units were deployed in it alone.

As Israel was deploying its military, civil settler militias organized in concert to defend “Jews”, “Jewish towns” and the “Jewish State.” A product of decades of deliberate dehumanization of Palestinian people, and aided by militarized police, they started to target Palestinian homes, people, and businesses. In Lydd, Musa Hassouna was shot dead by a Jewish settler. The shooter was later arrested but Amir Ohana, minister of police and one of Netanyahu closest allies, backed the shooter, saying that if it was up to him he would be released.

At this point, Israeli media and politicians have moved on to describe the situation as civil unrest and civil war. The civil war narrative works in the favor of Israel and plays into the Pavlovian instinct of international media and the international community, as it presents the violence against Palestinians as a clash, where there is a symmetry between two parties who are inflicting violence.

The civil war discourse erases the colonial context in which violence against Palestinians takes place. It is designed to mask the reality on the ground: one of settler colonial brutality, state-sanctioned violence, and pogroms by Jewish supremacist groups backed by the state against Palestinians, the Indigenous people of the land. This week’s pogroms are presented as an unfortunate turn of events in an ongoing internal national conflict. This framing enables Israel to present its military interventions against ’48 Palestinian as an attempt to prevent civil unrest from escalating in the benefit of both groups.

The government, via its armed forces, becomes a neutral actor. From backing a Jewish mob, Ohana changed his tune to “Violence mixed with hatred should be condemned outright. We have no other country. We must live here together.” Even Bezalel Smotrich, Kahanist MK and architect of the notorious Flag March in Jerusalem, who’s party was publicly supported by Netanyahu during the last election, tweeted about the lynching of a Palestinian man, that he is “shocked and ashamed to the bottom of my soul. We are in difficult days, under attack, frustrated… but damn it, how can Jews be so cruel?! Terrible.” Only two weeks ago Smotrich tweeted that Palestinians should remember that their presence in Israel is only temporary. How easily the tune changes.

The pogrom we are now witnessing is not an aberration. The Israeli state is leading this violence either by employing its security forces, army and police, or by using its proxy civil militias. Terrifying footage shows Israeli police joining the pogroms, storming into Palestinians homes, intimidating, beating, and arresting them just for being Palestinian.

Israel never made peace with the existence of ’48 Palestinians and wants to see them vanish. As Yousef Munayyer comments, this is “an extremely dangerous moment which the Israeli state could exploit to carry out further ethnic cleansing.” ’48 Palestinians know that all too well. They, like all Palestinians, live this trauma and the anxiety of future expulsion.

Crucially, the civil war discourse risks fragmenting the Palestinian people and their resistance at a time where it is united. Israel applies the civil war framing only to ’48 Palestinians, not other Palestinians. In doing so, it aims to undo this powerful moment by trying to domesticate them again as Israeli citizens and as an internal issue of the Jewish state.