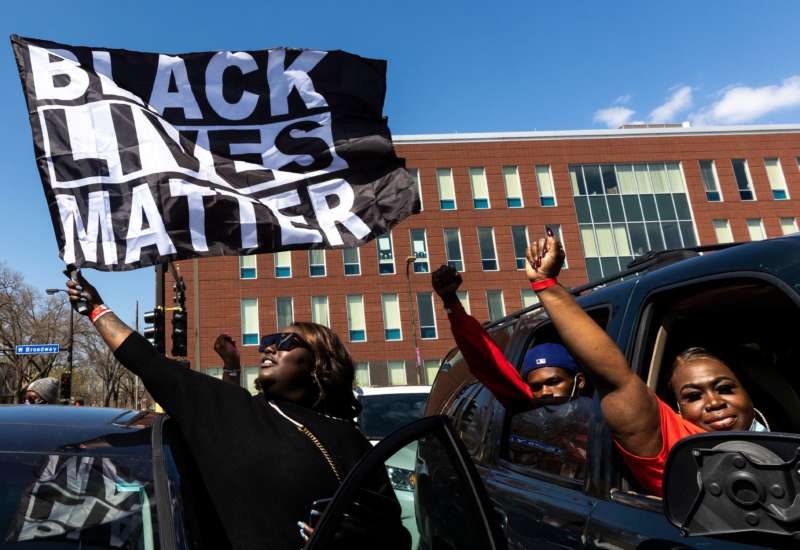 In early June 2020, a young Black mother who had just finished grocery shopping with her husband and 2-year-old child in Austin, Texas, was abducted by agents in an unmarked vehicle as part of a joint mission launched by the FBI and the Texas Department of Public Safety in cooperation with former Austin District Attorney Margaret Moore.

After arresting her in the parking lot, she faced a state jail felony for burglary and a rioting charge for allegedly livestreaming a protest outside of a Target in solidarity with Black liberation uprisings in May, according to the Drop the Charges coalition, a decentralized network of organizations and individuals supporting those criminalized for uprisings against police brutality. Her bail was set at around $10,000, her attorney George Lobb told Truthout.

At a press conference last month, members of the coalition stood in front of Travis County District Court in Austin with banners highlighting her case and calling for the dropping of charges against defendants criminalized during the uprisings across the country. The coalition formally presented a petition with over 2,000 signatures demanding that Travis County District Attorney ​José Garza drop the charges against people who protested for Black lives in Austin last year.

“District Attorney ​José Garza, who was elected on the wave of the Black lives movement, is continuing to pursue these felony charges,” Drop the Charges organizer Titus Davis said at the event. “José Garza made a big promise when he ran for office claiming he would reimagine public safety, but he has made no statement about protesters’ cases and about whether or not he will drop their charges. How is it reimagining public safety to remove a mother from her child?”

Within days, her case was dropped. “Our hard work as has paid off,” Drop the Charges organizer Olympia Garcia told Truthout. Campaigns like these prove that public pressure works. Lobb’s attorney agreed that the campaign accelerated the outcome of the case.

Drop the Charges coalition groups in Atlanta, Detroit and Minnesota, and other non-affiliated organizations in Tucson, Tallahassee, and elsewhere are making similar demands. More than 17,000 people were arrested during the unrest following the police-perpetrated murder of George Floyd nearly a year ago. At least 363 people were facing federal charges, according to the open-source intelligence research platform The Prosecution Project. While the vast majority of state-level charges and citations have been dropped — in part because of pressure mounted by anti-repression campaigns — an unknown number of people are still facing misdemeanor and felony charges.

“Just because the protests are over, doesn’t mean the fight is over,” said Garcia. “These charges follow you and affect every aspect of your life, like, with housing, jobs. It’s meant to drain you mentally, emotionally and financially.”

To keep up the momentum, Drop the Charges is calling for a day of action on May 26. They list rallies, banner drops, petition launches and political prisoner letter writing as suggested solidarity events. Through this day of action, the coalition hopes to bring attention to defendants in the direst circumstances, some of whom have been, or are currently, incarcerated.

In November, the FBI and Atlanta-area police raided the homes of Richard Hunsinger, John B. Wade, Vida Jones and Ellie Brett, according to the Atlanta Anti-Repression Committee (AARC). Hunsinger was arrested for alleged actions during a protest at the Atlanta Immigration and Customs Enforcement field office; Wade, Jones and Brett were arrested and charged with arson for allegedly burning police cruisers and/or a Wendy’s restaurant where Rayshard Brooks was murdered by Atlanta Police Officer Garrett Rolfe. While Jones and Hunsinger were released on GPS monitoring months later pending trial, Wade, Brett and at least six others are still being held without bond. (Meanwhile, white vigilante Kyle Rittenhouse, who murdered two anti-racist protesters in Kenosha, Wisconsin, was released on bail in November.)

More than 17,000 people were arrested during the unrest…. At least 363 people were facing federal charges.

Montez Lee, a 25-year-old Black man, has been held in federal custody for around nine months without bail. He says he has been wrongly accused of arson by the federal government and is asking for financial support. “I am a father to two children who [I] have had little contact with due to being incarcerated,” he wrote in a message posted to his fundraising page. “I have lost everything I’ve had because of this situation.”

​José Felan and Mena Yousif, two demonstrators who have endured racist and Islamophobic media coverage, were arrested by the FBI in Mexico in February on charges related to the uprising in Minnesota following Floyd’s murder. “These are very difficult times for me, or I should truthfully say, this is the most difficult time I’ve ever had to go through in my entire life,” Felan wrote to the Minnesota Uprising Arrestee Support group.

For the Drop the Charges coalition, it is important to support all defendants, even those who are charged with serious felonies and those who may have broken the law. “We were seeing a lot of the rhetoric of dividing between ‘good’ and ‘bad’ protesters. But we knew that these protesters had done nothing wrong,” Garcia said. “We know that without people in the streets, there would have been no change, whatsoever.”

The AARC echoed a similar sentiment in a blog post: “Without the determined acts of large crowds following the killing of [Rayshard] Brooks, it is unlikely that [Officer Garrett] Rolfe would have been [brought on] charges at all.”

Black liberation struggles have long utilized a diversity of tactics to win concessions from white supremacist systems. Slave revolts and insurrections were common leading up to the Civil War. Between 1861 and 1865, hundreds of thousands of enslaved people in the U.S. escaped their bondage in what W.E.B. Du Bois later called a general strike of the enslaved. And during the 1960s, there were at least 341 Black liberation riots alongside acts of civil disobedience.

Organizers emphasize that supporting those who take action for social and racial justice — regardless of their tactics — is vital for sustaining liberatory movements. To maximize favorable outcomes in court, legal support teams often help coordinate “mass defense” legal strategies, where defendants band together and fight charges as a cohesive unit. By refusing plea deals, defendants can clog up criminal court systems that are ill-equipped to prosecute a large number of jury trials; Roughly 97 percent of convictions are adjudicated through plea deals. Scholars have suggested that the “the criminal legal system could be brought to a halt by a mass refusal to plead guilty,” per a Vera Institute of Justice report. Red Aid, an organization that sparked the Drop the Charges coalition, helps defendants organize their legal strategy alongside attorneys.

In Minneapolis, according to Al Jazeera, defendants “coordinated with each other and mounted a unified attempt to bring the charges to trial” with assistance from the National Lawyers Guild. Many who refused to take plea deals had their charges dropped several weeks ago.

Similarly, after hundreds of people were mass arrested during Donald Trump’s inauguration in 2017 and charged with multiple felonies, “J20” defendants refused plea deals en masse, which eventually contributed to the dropping of charges a year and a half later.

Garcia said that their public awareness campaigns have contributed to the dropping of charges, too. But for all of the defendants who are connected to anti-repression groups, there are likely many who are isolated. Drop the Charges’s organizers are reaching out to supporters and independent anti-repression groups in hopes of building connections and forming nodes across the country to ensure all are supported.

“We really want to get in touch with as many people as we can, so we can support people’s campaigns in other places, but also help people start them if they need them,” said Garcia. “It’s just in our best interest for us to learn from other people’s cases and the way that they’re doing their campaigns so that other people can get their charges dropped.”