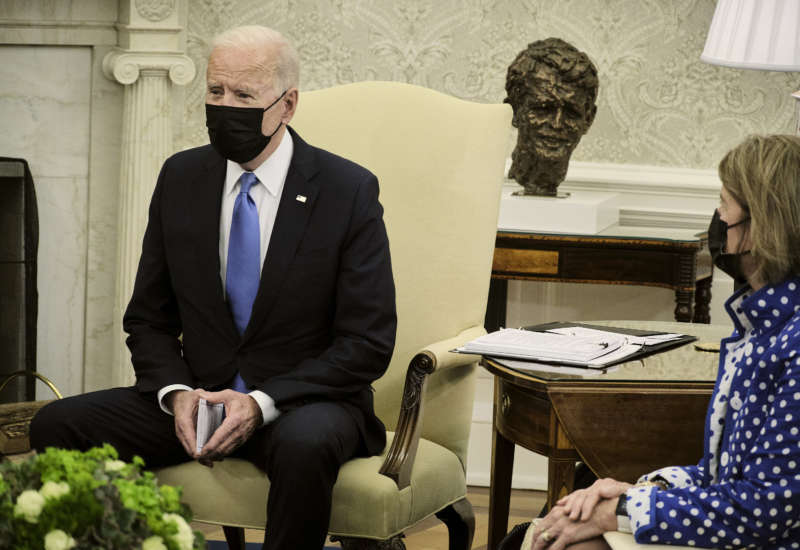 President Joe Biden’s economic plan, which is aimed at overhauling U.S. infrastructure, helping workers and their families, and raising taxes for the ultrarich, surely represents a big step in the right direction for equality and sustainability. It’s also not the end-all, be-all for economic and environmental policy. Much more will be needed to work toward real equity and avert the worst impacts of the climate crisis.

In this exclusive interview for Truthout, one of the world’s leading progressive economists, Robert Pollin, distinguished professor of economics and co-director of the Political Economy Research Institute at the University of Massachusetts at Amherst, explains what Biden’s economic plan means for the majority of American people and how it will help create a somewhat fairer tax system.

C.J. Polychroniou: Biden’s tax plan is to raise taxes for high-income individuals and corporations in order to create a fairer taxation system. Yet, lots of people seem to be worried about it, including investors and small business. Can you explain Biden’s tax plan and whether the targets he has set for it will indeed produce a fairer tax system?

Robert Pollin: The Biden administration has proposed a series of tax measures that would raise rates on U.S. corporations and the wealthy. These proposals include the following:

An increase in the corporate income tax rate from the current 21 percent rate to 28 percent;
Establish a minimum tax rate of 21 percent on the foreign income of U.S. multinational corporations;
Increase the top individual income tax rate for the richest 1 percent from 37 percent to 39.6 percent; and
Increase the taxes that top 1 percent pay on their capital gains — i.e., the money they obtain from selling assets, like stocks, bonds and real estate — from the current 20 percent to 39.6 percent.

There are two interrelated purposes of these tax proposals. The first is to have big corporations and the rich contribute a larger share to the federal government’s overall tax revenues. The second is to generate significantly more tax revenue, in order to pay for Biden’s major investment proposals, the “American Jobs Plan” and “American Families Plan.” These Biden proposals include investments to: 1.) upgrade the country’s traditional infrastructure, such as roads, bridges and water management systems; 2.) make broadband access universal; 3.) dramatically improve the quality and accessibility of child care and elder care; and 4.) build a clean energy infrastructure capable of staving off the deepening global climate crisis. These programs are in addition to Biden’s “American Rescue Plan,” which became law in March. The American Rescue Plan is a short-term stimulus program to move the U.S. economy out of the COVID-induced recession onto a sustainable and equitable growth path. The Rescue Plan is financed mostly through government borrowing, while (in their current proposed versions at least) the Jobs and Families plans are financed through raising taxes.

It is not the least bit surprising that lots of people, including investors and businesses of all sizes, as well as high-end individual taxpayers, would be worried about Biden’s proposed tax increases to finance the Jobs and Families plans…. They are worried because they don’t want to pay higher taxes. But it will be useful to consider these worries in a broader context. Here are a few key points:

Even with Biden’s proposal is enacted in full (which is unlikely), the increase in the corporate income tax would still leave the corporations paying a lower tax rate than they paid between 1994 and 2017. The Biden proposal would simply bring rate back to the level it was before Trump and the congressional Republicans gifted corporations with a big tax cut. In addition, even with the 2017 official corporate tax rate at 21 percent, about 18 percent of the largest U.S. corporations managed to legally pay zero income taxes in 2018. They accomplished this, in part, through moving parts of their activities offshore, at least on paper. The Biden proposal would make the corporations pay taxes even when they move their activities offshore.

As is well-known, the United States has experienced an unprecedented rise in income inequality since the onset of the neoliberal era, starting roughly with the election of Ronald Reagan in 1980. Since 1980, the richest 1 percent of family share of the total family income for the whole country has gone from about 9 percent to over 20 percent — i.e. the share of overall income going to the richest 1 percent of families has more than doubled under neoliberalism. Even more striking has been the rewards for being in the richest 0.01 percent of families — among the richest 12,000 households in the U.S. in a society with about 120 million households today. The share of total family household income that the ultrarich has received has gone from less than 1 percent of the total just prior to the neoliberal era to over 5 percent today. Roughly speaking, in today’s dollars, that would mean that ultrarich household income would be about $10 million if they received 1 percent of the total versus getting $50 million today through their 5 percent share. Neoliberalism, in other words, has delivered a fivefold income increase for the society’s richest 12,000 families.

In short, the rich are going remain ridiculously rich and big corporations will continue receiving outsized profits in the U.S. even if Biden’s proposals were enacted in full and the tax system were consequently to become somewhat fairer. Moreover, the Biden tax increases would have limited to no impact on the take-home pay of either small business owners or the merely moderately affluent.

That said, there are still good reasons to fund at least a significant share of Biden’s American Jobs and American Families programs through the federal government borrowing money, as is being done with the Rescue Plan, as opposed to raising all the funds through taxing corporations and the wealthy. The first reason is that, as of this writing, the federal government can borrow money for 10 years while locking in the historically low interest rate of 1.6 percent. That means that, if the government were to borrow, say, $500 billion right now to support the Biden programs, it would have to pay $8 billion per year in interest to the people who bought the 10-year government bonds. Those interest payments would amount to less than three one-hundredths of 1 percent of 1 percent (0.03 percent) of annual U.S. GDP over that 10-year period.

But even such minimal government interest payments could be reduced further through the Federal Reserve buying the government bonds and then retiring them — i.e. through the Fed effectively “printing money” to cover this new debt. This is a perfectly legitimate (and indeed, commonly used) tool in the government’s policy arsenal (the technical term among policy wonks is “debt monetization”). Indeed, during the COVID-induced recession of the past year, the Fed poured an astronomical $4 trillion into bailing out Wall Street, equal to nearly 20 percent of U.S. GDP. There should be no question that the Fed could use this same policy tool to, for example, finance a U.S. and global Green New Deal with $500 billion a year in Green Bond purchases.

Overall, these government borrowing policies could be implemented in conjunction with tax increases on corporations and the wealthy to both reverse the massive rise in inequality that has characterized the neoliberal era in the U.S., and to fund critical investments in a clean energy system and the care economy.

Biden’s “American Families Plan” is the complement to his “American Jobs” plan. The “Jobs” plan covers investments in infrastructure, broadband and clean energy, while the “Families” plan is about the care economy. The Families plan would provide 3- and 4-year-olds with free, universal pre-K; create a national paid family and medical leave program that eventually provides 12 weeks of up to 80 percent wage replacement to families who are caring for a new child or sick relative, healing from an illness, or grieving the death of a loved one; offer all students two years of free community college; extend tax cuts geared toward low- and middle-income families; and invest in a sliding-scale system that ensures most families don’t pays more than 7 percent of their income on child care for kids under 5. The White House estimates that the child care plan alone would save families roughly $15,000 per year in expenses.

Relative to policies in place now in the U.S. to support families, Biden’s Families Plan is a major breakthrough. It is worth emphasizing that this breakthrough would not have happened without decades of committed effort by progressive researchers and organizers to insist that these care issues were absolutely central for helping people to live decent lives. Indeed, a recent New York Times article described the decades of work that went into finally bringing care economy concerns into the forefront of policy priorities, first among progressives and then more generally. I am proud that my UMass and [Political Economy Research Institute] co-worker Nancy Folbre was featured in this article as a true pioneer around these issues. As Nancy says in the article, when she first starting her work on these issues, she was dismissed for spending her time on “girly” economics.

At the same time, the measures included in Biden’s Families Plan would not seem the least bit extraordinary in virtually all other industrial countries today. For example, right now about 17 percent of workers in the U.S. receive family leave benefits through their employers and nine states provide support for paid family leave. By contrast, every other high-income country in the world has a national paid family leave policy on the books. Other countries also have much more extensive and affordable day care support.

Taken as a whole, the policies included in Biden’s Families Plan will indeed establish a much stronger level of baseline well-being for low- as well as middle-income people in the U.S. But the impact of the program will depend on a range of details — one of the most important is how the law defines a “family member” in the paid family leave program. Less than 20 percent of Americans live in traditional nuclear-family households. It is critical, therefore, that people who need support be able to choose who would be eligible to provide them with paid support — whether it be a domestic partner, extended family member or friend. The Biden proposal didn’t flesh out this and similar details. These will be issues around which progressives will need to maintain strong organizing efforts.

The answer here is straightforward. The U.S. has given handouts to Big Oil because Big Oil has the political power to buy politicians’ votes. A rough estimate of the subsidies provided to U.S. fossil fuel companies, mostly through various forms of tax incentives, is around $20 billion per year. That is, of course, an obscene amount of money to pay companies whose business model entails destroying life on Earth as we know it. At the same time, it is a miniscule sum relative to the roughly $4 trillion that the Biden programs have proposed for his Jobs and Families Plans. Moreover, the amount of funding in Biden’s Jobs plan allocated to advance a viable climate stabilization program is itself inadequate.

Rather than asking whether Biden can end all subsidies to the fossil fuel industry, I think we should be posing a much bigger question: How do we phase out burning oil, natural gas and coal to produce energy altogether? Ending fossil fuel subsidies will only get us a tiny amount of the way. The fundamental project, therefore, remains the Green New Deal, centered around dramatically increasing investments to both raise energy efficiency standards and expand the supply of clean renewable energy sources while also strictly limiting the allowable consumption of fossil fuels, so that we achieve zero fossil fuel consumption and zero CO2 emissions by 2050.