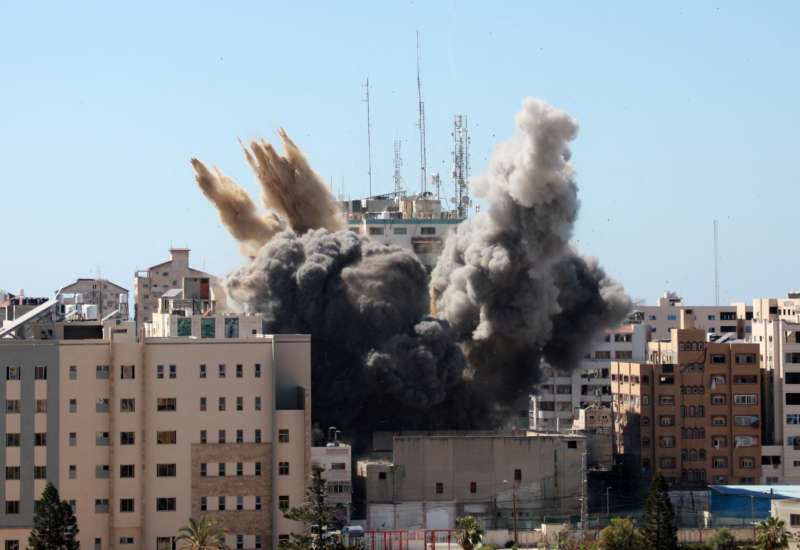 Israeli bombs destroyed a high-rise building in Gaza City that housed offices of The Associated Press, Al Jazeera and other media outlets on Saturday, the latest step by Israel to silence reporting from Gaza amid its military bombardment. The Israeli air raid totally demolished the structure.

Live Al Jazeera video showed the 11-story al-Jalaa building, which also houses a number of residences and other offices, crashing to the ground after being bombed as dust and debris flew into the air.

The strike came just hours after another Israeli bombing of a densely populated refugee camp in Gaza City killed at least eight Palestinian children and two women from an extended family, in the deadliest single strike of Israel’s current assault.

We are shocked and horrified that the Israeli military would target and destroy the building housing AP’s bureau and other news organizations in Gaza. They have long known the location of our bureau and knew journalists were there. We received a warning that the building would be hit.

We are seeking information from the Israeli government and are engaged with the U.S. State Department to try to learn more.

This is an incredibly disturbing development. We narrowly avoided a terrible loss of life. A dozen AP journalists and freelancers were inside the building and thankfully we were able to evacuate them in time.

The world will know less about what is happening in Gaza because of what happened today.

Al Jazeera’s Safwat al-Kahlout, reporting from Gaza City, said he had worked at the building for 11 years, and often did live reports from its roof.

“I have been covering lots of events from this building,” he said. “We have lots of good memories with our colleagues.”

It was not immediately made clear why the building was targeted by Israel.

“Now, no one can understand the feeling of the people whose homes have been destroyed by such kind of air attacks,” al-Kahlout said. “It’s really difficult to wake up one day and then you realize that your office is not there with all the career experiences, memories that you’ve had.”

If journalistic solidarity means anything whatsoever, it should mean, at the bare minimum, unreservedly speaking out about Israel wiping out the building housing media organisations such as Associated Press and Al-Jazeera pic.twitter.com/0rBdIt7dhU