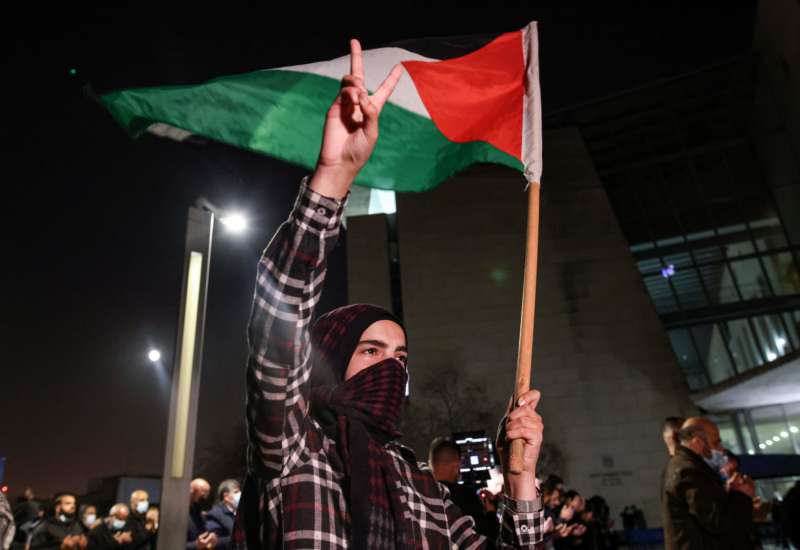 The world’s attention has turned again to deadly scenes of Israeli bombardment of the Gaza Strip and the launching of rockets by the militant group Hamas into Israel. It follows two weeks of protests in East Jerusalem against attempts to forcibly displace Palestinians from their homes in Sheikh Jarrah and Israeli police raids on worshippers in the al-Aqsa mosque compound.

But in towns across Israel, another important — and underreported — development is taking place. And it could change how we talk about Palestinians and Israelis.

Since May 9, 2021, thousands of Palestinian citizens of Israel, numbering some 1.9 million people and often referred to as “Arab Israelis,” have taken to the streets to express support for their fellow Palestinians in Gaza and Jerusalem. Protests are taking place in both mixed Arab-Jewish cities like Haifa, Jaffa and Lod, known as Lydda to Palestinians, as well as in predominantly Palestinian cities and towns like Nazareth and Umm al-Fahm.

The size and scope of the demonstrations have surprised many political analysts who usually discuss these Palestinians as part of the Israeli social and political fabric, separate from Palestinians elsewhere.

These “Arab Israelis” were placed under military rule until 1966 and were unable to directly contact family members living in refugees camps. Most were granted Israeli citizenship in 1952, but they faced a host of discriminatory laws that denied them access to their land, limited their economic opportunities and restricted their movements. While they could vote, form political parties and hold public office, extensive government surveillance — and punishment of those who criticized the state — created a pervasive climate of fear among these Palestinian citizens of Israel.

Discrimination and economic disadvantage continue today. Palestinian towns and villages in Israel face housing shortages and economic underdevelopment. Hiring practices that require job applicants to live in certain areas or to have served in the military — something very few Palestinian citizens do — end up pushing Palestinians into precarious low-wage jobs.

While direct housing discrimination was banned by the courts, Jewish communities often set up admissions committees that effectively limit the number of Palestinian citizens living in majority Jewish towns.

In addition, Palestinian citizens are subjected to “stop-and-frisk” police policies. And professionals face everyday forms of racism from some Jewish Israeli colleagues who are surprised by their level of education.

Palestinian citizens of Israel have been protesting these conditions since the founding of the state, but within limits. In 1964, the Arab nationalist Ard group called for “a just solution for the Palestinian question … in accordance with the wishes of the Palestinian Arab people.” In response, the Israeli government banned the group and arrested its leaders on charges of endangering state security.

Despite these restrictions, their expressions of Palestinian national identity have grown louder.

Following Israel’s occupation of the West Bank, Gaza Strip and East Jerusalem in 1967, Palestinian citizens of Israel and those under occupation met one another regularly, leading them to develop a sense of joint struggle.

In response, more Palestinian citizens identify themselves as belonging to one people who are collectively resisting settler colonial rule. A younger generation of grassroots organizers has taken the lead, as seen in the annual commemorations of the Nakba — the loss of Palestine in 1948 — every May 15.

This centering of Palestinian identity was on display in March 2021 in the Palestinian town of Umm al-Fahm. Protests against seemingly local problems — crime and gun violence — turned into an expression of Palestinian national identity as protesters waved Palestinian flags and sang Palestinian songs.

The latest protests around Sheikh Jarrah and incursions in the al-Aqsa compound likewise promote a common Palestinian cause. At a rally in the mixed city of Lydd, a few miles south of Tel Aviv, one Palestinian citizen protester scaled a lamppost and replaced the Israeli flag with a Palestinian one.

Meanwhile, the funeral of Lydd protester Moussa Hassoun on May 11 drew 8,000 mourners as he was laid to rest wrapped in a Palestinian flag. Since then, protests have swelled even further, leading Israeli security officials to impose a curfew on the town and call in reinforcements.

Scenes of police violently breaking up peaceful protests, Israeli security forces being deployed into Palestinian neighborhoods inside the country, and armed Israeli Jewish vigilantes attacking Palestinians in mixed cities could also, I believe, further reinforce the image of Israel as a colonial power in the minds of not only its marginalized Palestinian minority, but also their international supporters as well.

What could result is a new type of Palestinian mobilization, one that belies the idea of a fragmented people and unites all Palestinian people in a joint struggle.