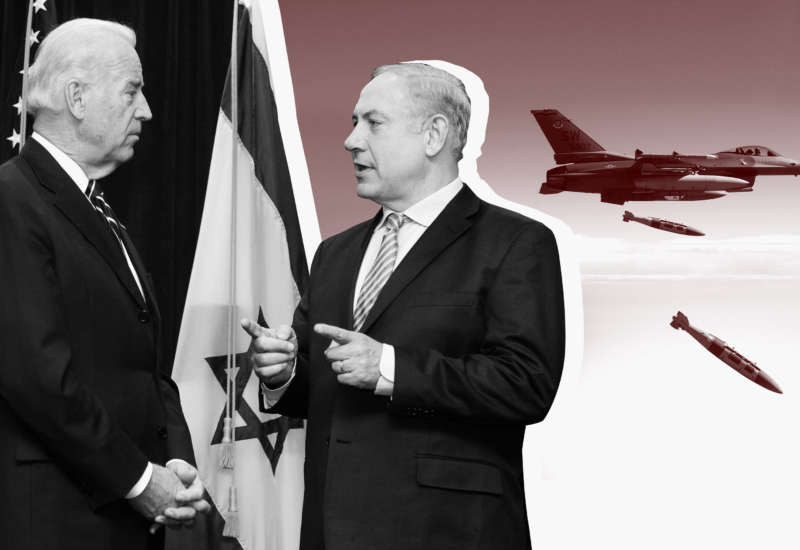 Human rights advocates warned Monday that the Biden administration is deepening U.S. complicity in the Netanyahu regime’s ongoing massacre of civilians in Gaza by attempting to push through a $735 million sale of so-called “precision-guided weapons” to Israel.

The Washington Post reported Monday that the Biden administration officially notified Congress of the sale on May 5, just days before Israeli forces began their latest bombardment of Gaza last week — an assault that has killed nearly 200 Palestinians, wounded more than 1,200, and displaced tens of thousands.

Since last Monday, the Israeli military has used bombs and missiles made by major U.S. military contractors such as Boeing and General Dynamics to obliterate major buildings in Gaza, including one over the weekend that housed offices of the Associated Press and Al-Jazeera.

“Criminal complicity,” Yousef Munayyer, a Palestinian-American writer and political analyst, tweeted in response to reports of the sale, under which Boeing would provide Joint Direct Attack Munitions to Israel.

Freelance journalist Alex Kane warned that “those bombs will be dropped on Gaza if approved, as is likely.”

THREAD: A case study in US complicity in Israel’s massacre on Gaza. Al Jazeera investigation reveals GBU-31, GBU-39 and MK-84 bombs are being dropped on Gaza. All three of these weapons are made by American companies. https://t.co/fgjNZ1OZn6

Speaking to the Post on the condition of anonymity, one Democratic lawmaker on the House Foreign Affairs Committee similarly cautioned that “allowing this proposed sale of smart bombs to go through without putting pressure on Israel to agree to a cease-fire will only enable further carnage.”

While Democratic-controlled Congress has the power to block the weapons sale, it is unclear whether there would be enough support in either chamber to pass a resolution of disapproval, even as a growing chorus of progressive lawmakers expresses support for conditioning — and, if necessary, cutting off — the $3.8 billion in military aid the U.S. sends to Israel each year.

As the Post reported, one Democratic Senate aide said that “it’s unlikely debate over the sale will ultimately result in a resolution of disapproval,” which must pass within 20 days of the formal notification.

Jamil Dakwar, director of the ACLU’s Human Rights Program, said Monday that “approving more weapons to Israel would add fuel to the fire and would only embolden Israel to continue its bombardments on Gaza.”

“[The] Biden administration must be held accountable for being complicit in escalating the violence and failing to prevent civilian deaths and suffering,” Dakwar added.

News of the sale came as the Biden administration on Sunday single-handedly blocked — for the third time in a week — a United Nations Security Council statement calling for an immediate cease-fire, a proposal that the Netanyahu government has repeatedly rejected in recent days.

On Monday, according to the Associated Press U.S. Secretary of State Antony Blinken indicated that the Biden administration “still would not press for an immediate cease-fire” between Israel and Hamas despite mounting international pressure.

“Any diplomatic initiative that advances that prospect is something that we’ll support,” Blinken said during a press conference in press conference in Copenhagen. “And we are again willing and ready to do that. But ultimately it is up to the parties to make clear that they want to pursue a cease-fire.”

Biden, for his part, has come under fire from progressives in the U.S. for refusing to condemn Israel’s deadly attacks on Gaza and excusing the massive bombing campaign as an act of “self-defense.”

“The world wants the killing to stop. The Biden administration does not,” said political analyst and human rights advocate Omar Baddar. “Why? Because Israel doesn’t want to stop the killing in Gaza, and Joe Biden and Secretary Blinken believe in unconditional support for Israel. This is disgusting and disgraceful, and a stain on our conscience.”

In a column late last week, The Intercept’s Jeremy Scahill wrote that on top of being “a nuclear power, armed with the most sophisticated and lethal weaponry imaginable,” Israel “operates with a blank check of impunity bestowed upon it by its fiscal and military sponsor: the U.S. government.”

“Biden has a career-long record of defending Israel’s worst crimes,” Scahill noted. “And as president, he is now facilitating this murderous crime against humanity being committed by his ‘great, great friend’ Netanyahu. This is all rooted in Israel’s multidecade war of annihilation against the Palestinian people.”

Comcast received a patent for this smart speaker design, but will it ever be released?