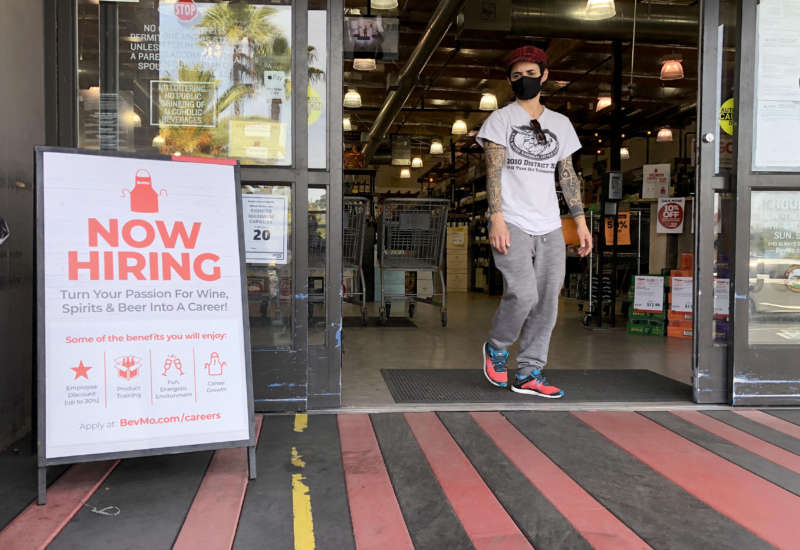 As the pandemic raged in 2020, tens of millions of U.S. families were kept economically afloat by expanded unemployment benefits — which lasted longer, were of higher value, and were accessible by more categories of workers (in particular freelancers or independent contractors) than was the case in non-pandemic moments.

In the first terrifying days of the pandemic and the accompanying public health-informed shutdowns, the economy nose-dived, seemingly with no bottom in sight. Within a month of the initial shut-down orders, unemployment had increased to roughly 15 percent. In states like California, with particularly strict shutdowns, that number was far higher still. Moreover, millions more were likely jobless but statistically invisible, as unemployment offices around the country struggled to keep up with the surge of applicants.

Going into the summer of 2020, even as some parts of the economy began to cautiously reopen, and even as new business models — such as DoorDash and other delivery services — started to pick up some of the employment slack, unemployment remained at over 11 percent, three times what it had been before COVID.

Now, however, as we head into another summer, with the pandemic in the U.S. receding in the face of the country’s largely successful vaccination rollout, and with the economy growing again, the GOP has come out swinging against keeping those expanded benefits in place.

The economy is still 2.8 million jobs south of where it was prior to COVID, the official unemployment rate is still 6.1 percent, and the tepid April jobs report showed the economy only added 266,000 jobs. But Republicans are now arguing those numbers are mediocre because generous benefits are providing a disincentive for people to work. Conservative economists and politicians on the right argue that sufficient quantities of jobs aren’t being generated, and a portion of those that are being generated aren’t being filled, largely because many of the out-of-work are perfectly happy sitting at home and living high off the hog on government assistance. It’s an updated but equally unpleasant version of the 1980s “welfare queens” cliché.

Even as President Joe Biden’s administration seeks to dramatically expand the federal social safety net, and even as many Democratic-run states have embarked on largescale expansions and reimagining of their own programs, nine GOP-led states, starting with Montana, Arkansas and South Carolina, and followed in quick succession by Iowa, Missouri, Tennessee, Mississippi, Alabama and North Dakota, have recently rejected federal funds for $300 per week supplemental benefits. In this, they join South Dakota, which as early as last summer rejected the expanded benefits for unemployed workers and instead opted to fully open its economy in the face of escalating COVID numbers. (By November of last year, South Dakota had one of the highest rates of infection in the world.)

The GOP’s alleged rationale, building on anti-benefits arguments that go back as far as President Franklin D. Roosevelt and the New Deal, is that high-value government benefits lead to sloth and thus artificially keep a lid on economic expansion. As state-level political leaders fall into line with this ideological policy stance, it looks increasingly likely that in the coming weeks many more GOP states will also opt to reject billions of dollars in unemployment assistance from the federal government. In doing so, they will essentially be signing off on the consolidation of two entirely different employment social safety nets in the country, one a minimalist red state version based around low wages and deeply inadequate safety net protections; the other an expansionist blue state model.

It looks increasingly likely that in the coming weeks many more GOP states will opt to reject billions of dollars in unemployment assistance from the federal government.

Last year, anti-immigrant voices in the GOP, such as Senators Tom Cotton and Josh Hawley, urged ever more restrictions on the numbers of immigrants legally admitted into the U.S., arguing that the labor market was so weak that all available jobs should be kept for red-blooded Americans. Now, just months later, they are arguing, all evidence to the contrary notwithstanding, that the labor market is currently so strong that benefits should be slashed for those same red-blooded Americans.

Each argument is disingenuous. Admitting large numbers of immigrants has always helped rather than hindered U.S. job creation. Restricting benefits doesn’t turbo-charge the labor market; rather it immiserates those already struggling to find a place within that market, and creates a huge incentive for unscrupulous employers to pay bargain-basement wages, knowing that workers don’t have any safety-net alternatives to fall back on.

If the GOP were serious about drawing people back into the workforce, the party would support living wage legislation. But instead, it has consistently opposed raising the minimum wage, including most recently when Biden made his rather half-hearted, and rapidly abandoned, effort to include the $15 per hour minimum wage in the $1.9 trillion American Rescue Plan.

The Republican position on all of this is quintessentially Victorian: Keep wages low at the bottom of the economy, but keep benefits even lower. Force people into the workforce, even if wages are no better than subsistence, and make the process of accessing benefits as humiliating as possible (think of the 19th-century Work House).

For the GOP base, this might make for good “red-meat politics,” pandering to the views and the biases of dyed-in-the-wool Republican voters. But red-meat politics doesn’t often make for good public policy making. Before limiting benefits to people who are out of work, the GOP should think carefully about the ongoing economic misery unleashed by the public health calamity.

The peculiarities of the pandemic, and the scale of the economic dislocation it resulted in, have made it particularly difficult to get a comprehensive read on the scale of joblessness and unemployment in the United States; but estimates in recent months have ranged from a low of just over 10 million to a high of about 18 million.

That’s an awful lot of workers — and their families — still reliant on government assistance to keep above water. And, in consequence, notwithstanding self-serving rhetoric about how tight the labor market is, that’s an awful lot of stacked-up pain waiting to be unleashed on those workers as the GOP uses its state-level power to curtail unemployment benefits over the coming weeks and months.

Why some tech CEOs are rooting for Elon Musk