Progressives Urge Biden to Move Forward on Infrastructure Without GOP 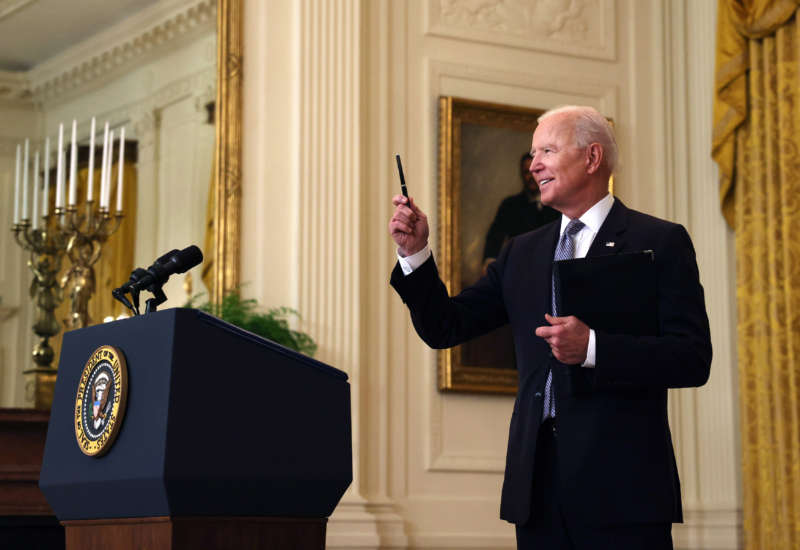 President Joe Biden has said he’s “prepared to compromise” as Republicans prepare to deliver their latest counterproposal in ongoing infrastructure negotiations with the White House. Progressives are asking why.

Beyond Washington, recent polls have found broad public support for key elements of the president’s infrastructure agenda, including tax hikes on corporations and robust investments in “human infrastructure” such as caregiving for children and the elderly, that Republicans in Congress oppose.

Progressives say the poll numbers bolster their argument that the Democratic majority in Congress should swiftly pass Biden’s $4 trillion jobs and infrastructure package without compromising with Republicans, who advocates say are only interested in obstruction.

Biden and members of his cabinet met with key Republicans in Congress to talk infrastructure last week, but little progress was made besides agreements to continue negotiating, according to the White House and news reports. The White House gave Republicans a deadline on Tuesday for presenting their latest counterproposal.

Biden, eying the prospect of a bipartisan victory ahead of the midterms, is attempting to balance the interests of centrist Democrats who are eager to negotiate with Republicans and liberals pushing to quickly deliver tangible results to voters while Democrats enjoy a slim majority in Congress. A watered-down, bipartisan compromise on infrastructure would almost certainly disappoint progressives, who criticized a $586 billion initial Republican counteroffer as woefully inadequate to meet the nation’s needs as it attempts to recover from a devastating pandemic.

“The administration needs to be careful. Trusting this Republican Party is incredibly, incredibly risky,” said Rahna Epting, executive director of the progressive group MoveOn, in a press call with reporters last week. “We know who they are loyal to, we have seen what their priorities are, and it’s very clear that their priority is obstruction.”

Senate Minority Leader Mitch McConnell made clear that Republicans would not support Biden’s proposal to raise taxes on the corporations and Americans making more than $400,000 a year, which would chip away at signature tax cuts made under President Trump. McConnell had previously said that Republicans are focused “100 percent” on stopping Biden’s agenda.

Still, Republicans have incentives to find a compromise as the Biden administration’s plans prove popular with voters and experts warn that new infrastructure investments are badly needed nationwide. A new poll released Thursday found that majorities of voters in 10 key swing states support the Biden administration’s proposal for massive investments in physical infrastructure, along with investments in “human infrastructure,” such as community colleges and affordable child care, that Republicans deride as a wish list of liberal partisan priorities.

Clear majorities of Democrats and independents support the plans, along with roughly one-third of Republicans. The poll was conducted by Data for Progress, which released the results with unions and progressive groups pushing Democrats to pass bold spending bills through Congress.

Support in Swing States for Taxes on Corporations and the Rich

Both parts of the infrastructure package, the American Jobs Plan and the American Families Plan, enjoyed net positive support in all 10 swing states when likely voters were told that the investments would be paid for with tax hikes on corporations and the wealthy.

“Voters of all backgrounds are tired of a rigged economy,” said Mary Kay Henry, president of Service Employees International Union (SEIU) said during the press call. “They’re tired of scraping by while big corporations rake in millions.”

Biden’s two-part jobs and infrastructure plan would modernize 20,000 miles of highways, roads and bridges while investing in public transit, broadband internet and flood protection, but Biden and Democrats also seek to create millions of jobs with broad investments in electric vehicles, education and caregiving — all major sticking points for Republicans. Republicans, who often deny the existence of systemic racism, are also likely to push back against Biden’s plans to reduce pollution and address long-standing racial inequities resulting from decades of prioritizing cars over public transit and building highways through Black communities, for example.

“Even as we recognize the essential nature of our transportation system, we must recognize that the system was built in a way that harmed vulnerable communities, does not provide equal services to all people, creates harmful local pollution, and contributes to climate change,” Biden said in a statement on Friday.

However, Biden appears poised to weaken the robust plan. Both the president and Republican leaders sounded optimistic about the prospect for a narrower, bipartisan infrastructure deal after meeting last week, although they offered few specifics.

Democrats are reportedly considering a narrower, bipartisan infrastructure legislation covering areas that both parties can agree on, such as funding for roads, bridges and airports, and potentially using the budget reconciliation process to separately pass other priorities along party lines. Under Senate rules, high-priority spending bills can be passed with a simple majority under the budget reconciliation rules, allowing the slim Democratic majority to bypass the 60-vote threshold needed to avoid a GOP filibuster.

After bipartisan negotiations broke down earlier this year, Democrats used budget reconciliation to pass the $1.9 trillion pandemic relief package without Republican support. The package provided $1,400 stimulus checks and proved popular with voters. A majority of voters in all 10 states polled by Data for Progress support the relief package and credit Democrats for securing relief for schools, local governments and essential workers.

In Georgia, another swing state where voters helped secure Biden’s victory over Trump and a slim Democratic majority in the Senate, 73 percent said they support the relief package and 64 percent credited Biden or Democrats in Congress for securing $1,400 stimulus checks sent to taxpayers earlier this year. Notably, 25 percent — including 43 percent of Georgia Republican voters — credited Republicans in Congress or President Trump for the stimulus checks, even though Republicans voted against the legislation and Trump was no longer in office when it passed.

“When you hear that this is not a bipartisan plan, those are Washington talking points because when you look across the country the people are in support of the American Rescue Plan,” said Rep. Nekima Williams, a Democrat for Georgia, on a press call with local advocacy groups. “The American Rescue Plan is in fact so popular that Republicans in Congress who actually voted no on the bill are taking credit for it back home in their districts.”

Biden and Democrats saw the pandemic relief as emergency legislation when they passed the package without Republican support. Biden, who pledged to work in a bipartisan fashion, is more eager to strike a deal with Republicans on infrastructure. However, Epting said Republican attempts at negotiating with Biden on infrastructure are “just a delay tactic” to slow down the Democratic agenda ahead of the 2022 midterms.

“We need to put aside these false notions of bipartisanship with a Republican Party that is just trying to delay this, and we need to move these packages together as one package … as soon as you start breaking it up, you make the package more vulnerable,” Epting said.

The most popular aspect of the American Family Plan is guaranteeing 12 weeks of paid family and medical leave for workers within a decade, which 65 percent of voters supported across 10 swing states, according to Data for Progress. In West Virginia, for example, 70 percent of likely voters said they strongly or somewhat strongly support paid family and medical leave, while only 25 percent oppose the proposal.

Meanwhile, the popularity of the American Jobs Plan is driven by support for investments in home and community-based care for the elderly and people with disabilities, along with updating energy and transportation infrastructure and replacing lead pipes that can contaminate drinking water, according to Data for Progress. Other recent surveys found Biden’s proposal to invest $400 billion in at-home and long-term care for seniors and people with disabilities is highly popular across party lines.

The $2.3 trillion proposal would also invest in child care, which is at the forefront of many voters’ minds after the pandemic forced schools and daycares to shut down. Bipartisan majorities in swing states “overwhelmingly” view the caregiving investments as drivers of economic growth, because they allow people to return to work. The American Jobs Plan would boost pay for homecare workers who care for children, the elderly and people with disabilities while supporting their right to unionize and collectively bargain with employers.

Advocates point out child care workers are often women — particularly women of color — who are underpaid despite providing a crucial service to families and the economy.

“This pandemic brought a simmering crisis to a boil as the burden to care for family members fell on women, and particularly women of color,” said Ai-Jen Poo of Care in Action, a nonprofit that advocates for domestic workers, in a statement. “Families need these policies put in place. Working caregivers enable all of us to have a choice to return to work.”