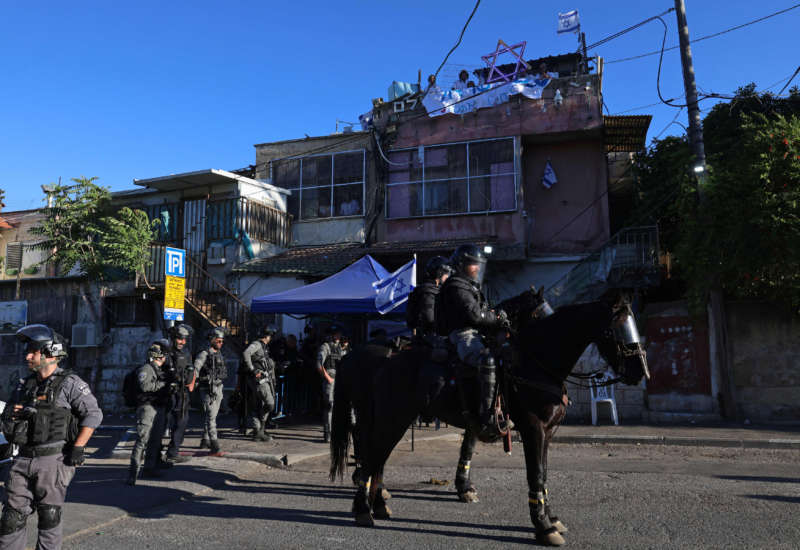 Like many, I have watched with horror as cynical state actors and the legacy of Palestinian dispossession and settler colonialism have fueled the latest conflagration across Israel/Palestine. Underwriting the cheap political calculus of Israeli Prime Minister Benjamin Netanyahu and his political cronies is a network of U.S. financial support. Indeed, U.S. military aid and perverse corporate incentives underlie the U.S.-Israeli arms trade. A few courageous politicians are beginning to forge new conversations on sanctions and conditioning U.S. aid. However, absent from these conversations has been the messier, but no less critical, U.S. financial vehicles that fuel Israeli state violence. Corporate welfare and tax subsidies are also taxpayer monies that come at a cost to local communities.

So let us start at the beginning then in Sheikh Jarrah, where four Palestinian families face the imminent threat of forced displacement. How is it that violent appropriation of the homes of Palestinian refugees through paramilitary and state policing can be peddled as a private property dispute? The answer has to do with U.S. capital and its ability to subsume any critical interrogation into its production. Just as former Israeli Prime Minister Golda Meir famously appealed to Americans for their open hearts and open purses, so too today is this patronage at work. However, the funding streams are perhaps more convoluted. While anecdotally, one can find no shortage of Americanized Hebrew in East Jerusalem, the settlement enclaves sprouting up across the area are supported by a constellation of corporations and nonprofits financed mainly through U.S. tax-exempt donations. In the case of Sheikh Jarrah and other East Jerusalem neighborhoods, one need only look at two such settler organizations, Nahalat Shimon and Ateret Cohanim.

In 2003, the Delaware-based Nahalat Shimon International purchased Sheikh Jarrah properties from two Jewish trusts. Nahalat Shimon intended to push Palestinians out of their homes and build a 200-unit housing complex. Delaware happens to be a corporate tax haven, but it is also convenient for setting up shell operations to launder money. Even the minimal corporate ownership disclosures required by the state of Delaware are blocked from public view. Just as the Israeli settler movement has hidden its activities under state-contracted mercenaries and local police, it has also benefited through the cover of sophisticated transnational tax havens. The movement’s financiers and board of trustees remain shrouded across the Atlantic and receive public subsidies in the form of Delaware’s lax corporate taxes. These financial structures lend themselves well to extrajudicial home seizures.

Similarly, Ateret Cohanim, another settler organization active two miles away in Batan al-Hawa, receives tax-exempt foreign donations through its “American Friends of” 501(c)3. A quick Google search reveals an address on West 35th Street in New York City. In his groundbreaking 2015 Haaretz investigation, Uri Blau found that Americans sent at least $220 million in tax-exempt donations over a five-year period to Israeli settlements, through organizations like Friends of Ateret Cohanim. These tax subsidies and the activities they support — the ethnic cleansing and Judaization of East Jerusalem — come with a loss to the U.S. Treasury. As the violence escalates, it is incumbent on us and our government to examine how our tax policies are furthering Israeli state violence and Palestinian dispossession, and fomenting political instability.

Though the U.S. Treasury does not actively condone this dispossession, they purport these U.S. charities to be lawful as long as they comply with IRS codes and self-reporting requirements. While U.S. policymakers pay lip service to the peace process, how is it that private citizens have legally spent millions inciting political violence and Jewish supremacy through our tax codes? The donations are damaging to U.S. interests abroad, and they most certainly do not offset the societal monetary costs of the tax exemptions themselves. More importantly, this philanthropic system was never democratic to begin with. Somehow, a handful of subsidized U.S. donors whose identities are not even public have contributed to Israeli apartheid and violent incitement.

Gaza is on fire, and U.S. multinational corporations and their investors are not just fanning the flames, they are literally part of the combustion. Of the U.S. munitions used in Gaza — Boeing, Hewlett Packard, Lockheed Martin and Raytheon — the list is long and predictable. These corporations not only bring in revenue from their contracts with the Department of Defense and independent arms dealings, many also receive additional corporate welfare through state legislatures by bullying local officials and threatening job cuts. Raytheon did this in the mid-1990s in Massachusetts, my home state, radically rewriting Massachusetts’ corporate income tax code. Boeing has historically been one of the largest recipients of corporate welfare in the country, receiving an incentive package estimated at $8.7 billion in state tax breaks in 2013 that was only overturned in 2020. This corporate malfeasance is the product of rapacious capitalism with low taxes, low wages and little regulation.

The settlement enclaves sprouting up across the area are supported by a constellation of corporations and nonprofits financed mainly through U.S. tax-exempt donations.

Our tax money is not just subsidizing Israeli military aid. It subsidizes private provocateurs, settlement lobbies and multinational corporations sowing destruction in Gaza, the West Bank and East Jerusalem. It is time we start recognizing tax breaks as public funds worthy of public debate and discretion. Reforming the United States’s antidemocratic finance system and holding our citizens and corporations accountable for what they do with federal and state subsidies is critical not only to ending apartheid in Israel/Palestine, but also to democratizing a tax system that’s fundamentally unjust.