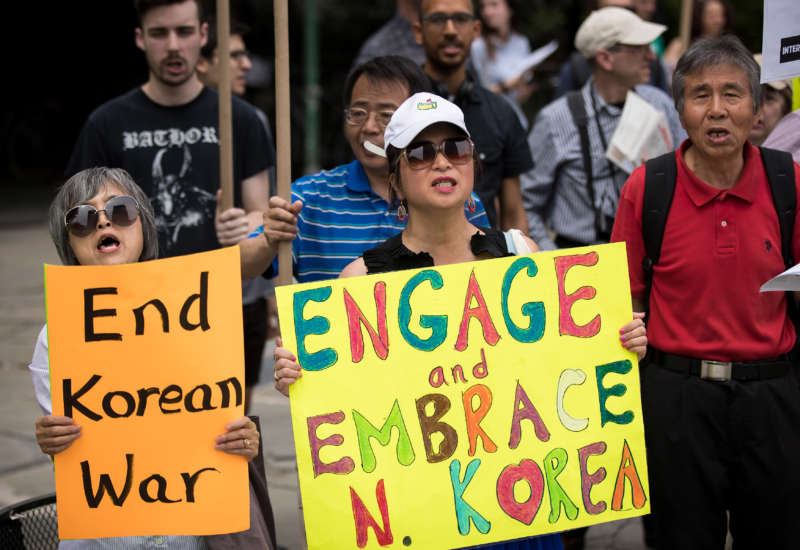 Noam Chomsky recently argued that the Biden administration’s foreign policy remains committed to maintaining U.S. global hegemony through sanctions and nuclear weapons. Nowhere else in the world is this more evident than in the Korean Peninsula, where the U.S. is pressuring its “ally” South Korea into the front lines of a long-simmering confrontation with China, and where a nuclear standoff between the U.S. and an increasingly isolated North Korea remains a real possibility.

On the early morning of May 13, residents of the central farm town of Seongju, South Korea, joined in protest against the deployment of the latest battery of the U.S. Terminal High Altitude Area Defense (THAAD) missile defense system in their backyard. Chained together to form a human barrier, they physically blocked the road to the nearby U.S. base. Two thousand South Korean police forcibly dispersed them — the second time in a month they had clashed with residents protesting the missile system — injuring dozens, including women and elderly farmers.

In the wake of the ensuing public relations fiasco, South Korea’s Defense Minister reportedly admitted that the forcible removal of the villagers blocking the base was in response to a request by U.S. Secretary of Defense Lloyd J. Austin III. The South Korean government had hoped that acceding to Austin’s request would help secure President Joe Biden’s support for resuming the inter-Korean peace process.

The timing of this incident, just a week before South Korean President Moon Jae-in’s planned May 21 visit to Washington for his first summit with Biden, may foreshadow what is to come. Moon believes it is time to take action on North Korea, and is expected to press Biden to engage in diplomacy with Pyongyang. Nevertheless, in spite of the fact that the stalled denuclearization talks with the North are expected to top the agenda next week, odds of a breakthrough at this point seems slim.

Biden will likely tout the U.S.-South Korea alliance, which is the cornerstone of U.S. regional containment policy, and whose framework, according to historian Bruce Cumings, is based on two pillars: isolating North Korea from the rest of the world while pressuring South Korea to serve as a forward base for the U.S.’s ongoing East Asian operations. This “alliance” reduces South Korea to the status of an occupied frontline outpost, saddling it with the burgeoning cost of supporting the massive U.S. military presence on its soil, depriving it of the authority to craft independent state policy and subordinating its military to U.S. command in the event of conflict. Framed by the neocolonial subtext that favors maintenance of this one-sided status quo, inter-Korean diplomacy is dismissed as a high-risk endeavor, leaving the two Koreas in a state of perpetual war.

This containment policy also manufactures and perpetuates the myth of the North Korean threat, a decades-long adjunct of U.S. domestic politics accorded credibility in great part by a relentless propaganda campaign. Like Obama’s “Pivot to Asia” policy, Biden’s priority appears to be to subsume South Korea within global network of strategic U.S. outposts under the mantle of multilateralism, forcing a permanent military occupation on its people in order to further hem in China.

The first pillar of containment that Cumings describes is clearly evident in Biden’s new North Korea policy, which was announced two weeks ago after a lengthy review. Drafted by top-level officials with ties to the U.S. military-industrial complex, the administration’s plan is being presented as a “calibrated, practical approach to diplomacy with the North with the goal of eliminating the threat to the United States.” Despite minor tactical differences, however, Biden’s policy amounts to little more than a repackaging of the failed approaches of previous U.S. administrations toward Pyongyang. There has been no mention of security guarantees for North Korea, implementing a peace treaty to end the 70-year-old war or reassessing sanctions that primarily target the civilian sector.

In fact, in spite of North Korea’s unilateral 2018 moratorium suspending nuclear weapons tests, Washington has not only refused to reciprocate, but has added hundreds of more brutal sanctions against the North. A senior U.S. official told the Washington Post that the Biden administration intends to “maintain sanctions pressure” for the foreseeable future. Meanwhile, further eroding any realistic prospect for achieving a diplomatic solution, the Strategic Competition Act currently under consideration in Congress recommends maintaining “sustained maximum economic pressure” against North Korea indefinitely. Adding to the chorus of hostility, U.S. Secretary of State Antony Blinken stated that the objective of any talks would be “complete denuclearization,” adding that “the diplomatic ball is in [North Korea’s] court.” It goes without saying that the United States does not plan to commit to a reciprocal abandonment of its own nuclear weapons as part of any such negotiations.

Biden’s policy amounts to little more than a repackaging of the failed approaches of previous U.S. administrations toward Pyongyang.

While ratcheting up tensions with the North has done little to enhance prospects for diplomacy, it has enabled an administration heavily influenced by the U.S. military-industrial complex to rationalize an $18 billion defense package to develop a new interceptor program nominally designed to counter North Korean and Iranian missiles.

The second pillar Cumings describes, the coercion of South Korea to subordinate itself to American national security interests, was brazenly summed up by former president Trump’s declaration that Seoul can do “nothing without our approval.” While the present administration may not trumpet this viewpoint quite as openly, it is clearly evident in Biden’s North Korea policy. Much of the current administration’s foreign policy team consists of Obama-era hardliners, including Secretary of State Blinken, who served as deputy secretary and national security adviser under Obama and has long advocated anti-China policies. It is therefore worthwhile to review the Obama administration’s legacy of pressuring South Korea to implement policies detrimental to North-South amity in furtherance of Washington’s broader anti-China strategy.

In the aftermath of Pyongyang’s fourth nuclear test in 2016, the Obama administration pressured South Korea to close the Kaesong Industrial Complex, where some 120 South Korean manufacturers had employed over 50,000 North Koreans for over a decade. That same year, the administration pressured South Korea into joining the General Security of Military Information Agreement (GSOMIA), which mandates that the U.S.’s most hardened East Asian outposts, South Korea and Japan, share defense technology and tactical strategy with the U.S. in support of wartime military operations in the East Asian theater.

Additionally, South Korea is still subordinated to the OPCON (Operational Control) provisions first instituted by the U.S. during the Korean War. These provisions, which specify “authority to perform functions of command over subordinate forces,” dictate that the South Korean military may operate independently only in peacetime, and is subject to full U.S. control in the event of war. The Institute for Security and Development Policy (ISDP), a nonprofit and nonpartisan international research and policy organization, notes that “apart from South Korea, only fragile states like Afghanistan and Iraq have entirely put their forces under foreign command in modern times.” While OPCON is nominally scheduled to be returned to the South Korean military next year, the ISDP bluntly states that the notion that “OPCON will be completed [in 2022] is not a given. Several significant roadblocks can impede or completely stop the transfer’s progress in the coming years.”

In this context, the GSOMIA, lauded by former Secretary of State Mark T. Esper as “an effective tool for the United States, Korea and Japan … in times of war,” represents an additional incremental erosion of South Korean sovereignty. Under this agreement, South Korea is not only obliged to surrender military control to the U.S. in the event of war, but it is also forced to throw in its lot with Japan, with which it is still at odds over acceptance of responsibility for crimes committed by Japanese troops during their brutal 35-year occupation of Korea. For this reason, the majority of South Koreans oppose the GSOMIA as a further detriment to their sovereignty.

In 2017, the Obama administration forced through the initial installation of the controversial THAAD anti-missile system despite nationwide protests and fierce opposition by local residents, unleashing a five-year war on the small rural community in which the battery was deployed. Biden is widely expected to follow Obama’s footsteps and pressure President Moon Jae-in into the installation of additional THAAD batteries as well as the forward deployment of intermediate-range ballistic missiles on South Korean soil.

In March of this year, the Biden administration, following in the footsteps of its predecessors, pressured Seoul into bearing a heavier burden for hosting the 28,000 U.S. troops stationed in South Korea through a defense cost-sharing deal. In addition to being bound to spending billions every year on U.S. military hardware (South Korea is the 4th largest importer of U.S. weapons), Koreans will have to make excessive contributions to the living costs of the U.S. troops stationed on their soil, covering 92 percent of the $10.7 billion cost of the new U.S. military base in Pyeongtaek, and providing additional rent-free land for the network of U.S. military bases and exclusive military leisure and entertainment facilities throughout South Korea.

In his summit next week with Moon, Biden has an unprecedented opportunity to end decades of hostility, division and occupation.

Noting that Washington continues to pressure Seoul into purchasing American weapons and bearing the costs of its garrisons without making any genuine effort to resolve tensions on the Korean Peninsula, former presidential adviser Moon Chung-in stressed the need to free the Korean peninsula from its “geopolitical trap” by ending U.S.-South Korea alliance in its present form.

To sum up, the basic framework of the U.S.’s foreign policy in the Korean Peninsula has remained unchanged throughout successive U.S. administrations. Its goal remains to “contain the North and to restrain the South.” Unless Biden changes this approach, his North Korea policy will be a non-starter. Forcing South Korea to join an anti-China bloc under the framework of the U.S. Indo-Pacific plan will alienate the majority of South Koreans who do not feel a clear and present threat from China, their premier trade partner, and forcing yet another Cold War on a nation that has yet to overcome the legacy of destruction and division left by the last one.

The alternative is to end the root cause of the decades-long stalemate — the U.S.’s containment policy. According to a recent survey, over 70 percent of Americans support a peace agreement with North Korea, and an even number of South Koreans support lifting sanctions against the North in favor of diplomacy. Meanwhile, 73 percent of South Koreans believe that Biden should restart talks with North Korea.

In his summit next week with Moon, Biden has an unprecedented opportunity to end decades of hostility, division and occupation. By taking the historic step of supporting inter-Korean engagement and reconciliation and working toward a peace treaty to finally end the 70-year-old Korean War, Biden could help free Koreans from the tragic cycle of division, occupation and hostility that continues to define them as a nation.