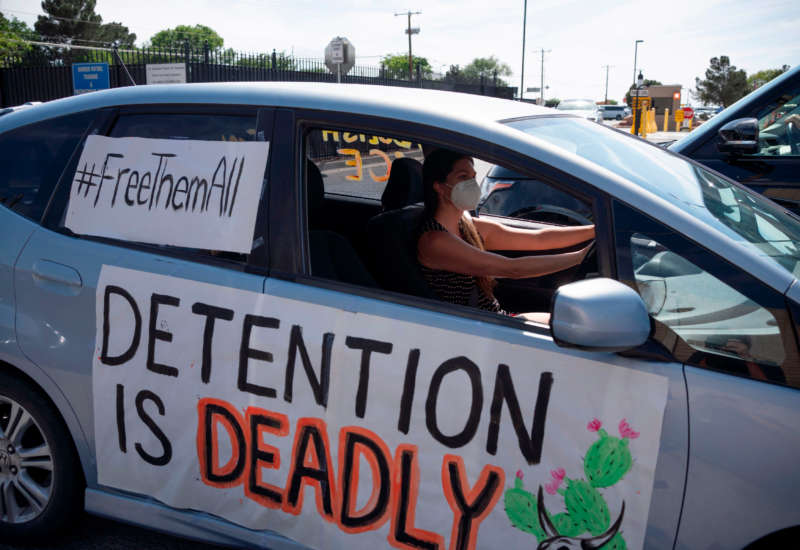 In a move hailed as “a major win” by migrant rights advocates, the U.S. Department of Homeland Security on Thursday announced it is moving to end migrant detention at two county jails under federal investigation for alleged abuses including forced sterilizations and unleashing dogs on detainees.

In a memo to Tae Johnson, the acting ICE director, Mayorkas said that “we will not tolerate the mistreatment of individuals in civil immigration detention or substandard conditions of detention.”

This is a decisive victory for the dignity of immigrants. #CommunitiesNotCages 1/ pic.twitter.com/YOOM8WfIPf

The letter specifically mentioned Bristol County Jail, where the Massachusetts attorney general’s office found that officers sicced dogs on migrant inmates and assaulted them with pepper spray, resulting in at least two hospitalizations.

Last September, House Democrats demanded an emergency investigation into allegations of medical abuse at the Irwin County Detention Center after whistleblowing nurse Dawn Wooten alleged that an alarming number of forced hysterectomies were performed on migrant women prisoners there.

According to Amnesty International, “Some women were reportedly unsure why the procedure was performed, or they were not fully informed of what procedures would be performed on them.”

A nurse said ICE has been performing forced hysterectomies on immigrant women. She also said ICE staff have not been providing proper medical care for detainees with #COVID19 symptoms. pic.twitter.com/yLlpLP6by3

“The announcement signals a major win for people who’ve been detained at the facility and bravely spoken out against its abuses and for local organizations who have long fought to shut it down,” the groups said.

Detention Watch Network executive director Silky Shah said that “we applaud the brave detained people who have demanded their freedom.”

“The shutdown of Bristol is happening because of their bravery and the years of advocacy work led by local groups documenting how inhumane and unjust the facility is,” said Shah. “And while we are celebrating this win, we know that this must be the first step of many, including ensuring that people are released and not transferred to other detention facilities when contracts are cut.”

“Bristol exemplifies how the system as a whole is fundamentally flawed and we call on the Biden administration to continue to cut detention contracts and shut down facilities for good,” added Shah. “Simply put, everyone should be able to navigate their immigration case at home and in community — not behind bars in immigration detention.”

Activist and FANG Collective co-founder Sherrie Anne André — who last March was sentenced to 30 days behind bars for their participation in an August 2018 anti-ICE protest at the Bristol lockup — said that, “While I am feeling a sense of relief and gratitude towards those who have relentlessly pushed for the dissolution of this ICE contract, I know that the relationships between ICE and Bristol County have been forged, and that [Sheriff Hodgson] will continue to abuse his position of power while inflicting the harms of white supremacy on our communities.”

“Contracts should burn. Prisons should burn. We need to continue to forge our own relationships with each other outside of these harmful systems to build a beautiful future for all of us,” André asserted.

I commend DHS for acting on our recommendation to sever all ties with the Bristol County Sheriff’s Office. The BCSO has a long history of abuse and neglect. Today’s decision is a big step toward protecting immigrant detainees from further harm.https://t.co/v9yEVcHUh2

In announcing the DHS move, Mayorkas said: “We have an obligation to make lasting improvements to our civil immigration detention system. This marks an important first step to realizing that goal. DHS detention facilities and the treatment of individuals in those facilities will be held to our health and safety standards.”

“Where we discover they fall short, we will continue to take action as we are doing today,” he added.