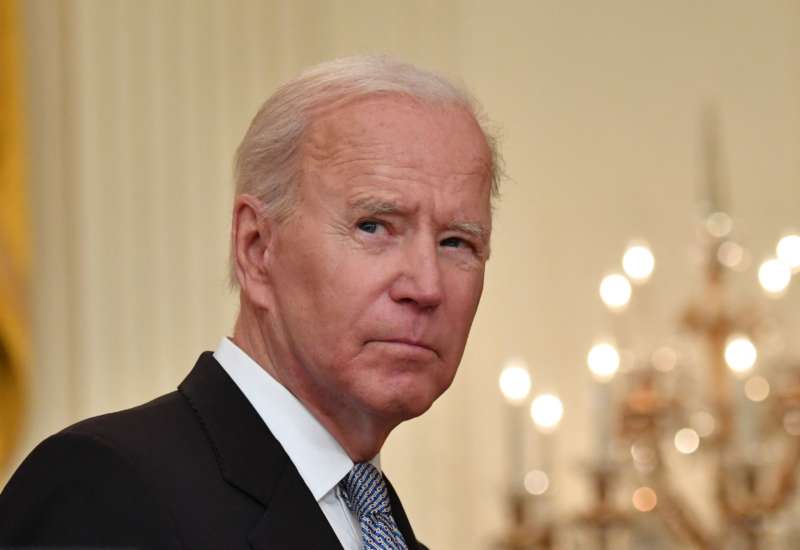 Progressives called it a “huge mistake” Friday after the White House announced President Joe Biden had preemptively slashed his own infrastructure proposal by approximately $600 billion in order to appease Republicans and some corporate-friendly Democrats in the U.S. Senate.

“President Biden knows this is a once-in-a-generation opportunity to make real change, which is why he campaigned on a bold climate vision and began his administration with a historic Covid relief bill,” said Ellen Sciales, press secretary for Sunrise Movement. “He can’t follow that up by going small and selling out our multiracial, cross-class movement of working people to compromise with politicians who would rather ensure billionaires get tax cuts than make sure we get paid a living wage.”

Biden’s offer to downsize his American Jobs Plan, described by progressives as already inadequate, from $2.3 trillion to $1.7 trillion — including reduced investments in sorely needed broadband, among other projects — came just days after congressional Republicans missed the president’s Tuesday deadline to provide him with their own counter-proposal.

Progressive critics argued that Biden’s unprompted embrace of spending cuts is a political disaster that threatens to undermine the nation’s attempt to recover from the pandemic-driven economic downturn and to confront the looming climate emergency.

“If the president continues down this path, how will he justify his choices to the workers, caregivers, climate refugees, and so many other members of our communities who need support to survive?” asked Kaniela Ing, climate justice campaign director at People’s Action.

Arguing that “we need to Build Back Better, not Build Back in Bad Faith,” Greenpeace USA climate campaigner Ashley Thomson emphasized the need to “build on and go bigger than the vision President Biden offered on the American Jobs Plan—not capitulate to bad-faith negotiations from Republicans that want us to compromise on justice, on climate, and on our futures.”

“Millions of voters have given the Biden administration a mandate to be bold and tackle the interlocking crises facing our country — the continued fallout from Covid-19, racial injustice, economic inequality, and the worsening climate crisis,” Thomson added. “Even more, our movement has given Washington the THRIVE Act, a blueprint for creating 15 million jobs while furthering racial and economic justice.”

As Sciales noted: “Not a single Republican senator voted for the popular, much-needed Covid relief package and Democrats passed it anyway. That’s the correct strategy. Democrats must take their power seriously and do what’s needed with or without the GOP.”

Rahna Epting, executive director of MoveOn, said in a statement that “Republicans are not a serious governing party and the Biden administration should stop treating them like one.”

“Since the moment Biden took office, Republicans have shown they are more interested in lying about the last election than in solving today’s crises,” Epting added.

Earlier this week, several Democratic lawmakers advocated for quickly enacting a robust and comprehensive infrastructure package regardless of whether their right-wing colleagues approve of it.

“While bipartisan support is welcome, the pursuit of Republican votes cannot come at the expense of limiting the scope of popular investments,” 60 House Democrats wrote in a letter addressed to House Speaker Nancy Pelosi (D-Calif.) and Senate Majority Leader Chuck Schumer (D-N.Y.) — whom Sciales earlier this month chastised for engaging in “performative negotiations” with the likes of Senate Minority Leader Mitch McConnell (R-Ky.), who has already vowed to oppose any spending proposals that include even modest tax hikes on the richest Americans and corporations.

In her statement Friday, Sciales said that “if Democrats learned anything from the past ten years, it has to be that negotiating against ourselves doesn’t work.”

“Let’s not mince words: this is a demonstrable failure of a political strategy,” she said of Biden’s latest offer. “We can’t repeat the same mistake and expect a different result.”

“Our message to President Biden is simple: you are making a huge mistake,” said Sciales. “Voters in 2022 and 2024 will not ask whether you were nice to Sen. Joe Manchin (D-W. Va.) and Sen. Susan Collins (R-Maine); they will look to whether or not you dealt with the climate crisis and created millions of new union jobs when you had the chance.”