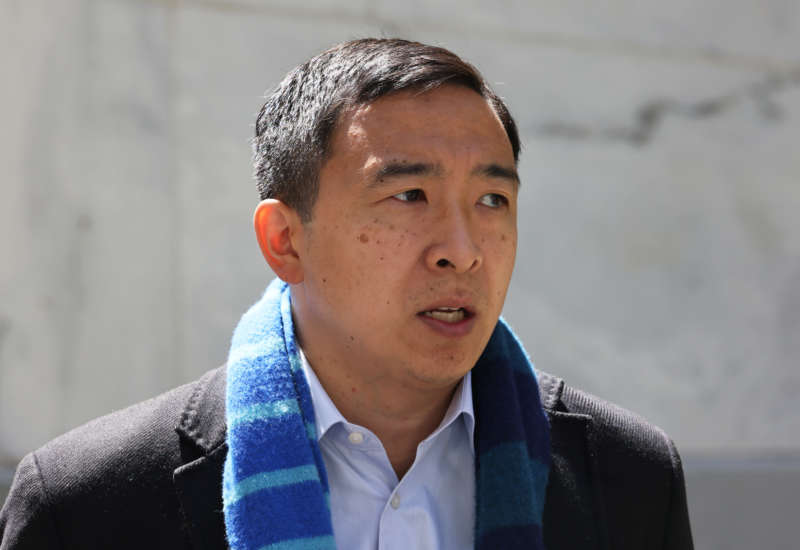 The super PAC supporting Democrat Andrew Yang’s mayoral campaign in New York City has been funded almost exclusively by finance industry executives who have donated tens of millions of dollars to super PACs that supported President Trump and other national Republicans, according to records from the New York Board of Elections.

While nearly all of the leading Democratic mayoral candidates are participating in the New York City public campaign financing program, including Yang, super PACs are still allowed to spend independently in support of their campaigns. Ahead of the June 22 primary, the pro-Yang Comeback PAC released its first ad today.

The super PAC’s first contributor was right-wing billionaire Jeff Yass, co-founder of investment firm Susquehanna International Group, who donated $500,000 on May 7. Yass told Politico he is backing Yang for the candidate’s support of charter schools.

A board member of the libertarian Cato Institute and the second-highest donor last cycle at $21 million to the anti-union Club for Growth Action, Yass was also the major funder behind the Protect Freedom PAC, with $8.6 million given, which supported the campaigns of House Republicans Madison Cawthorn and Lauren Boebert. Club for Growth Action spent more than $13 million supporting the re-election of President Trump in the 2019-20 election cycle.

Citadel hedge fund CEO Ken Griffin donated half a million dollars to Comeback PAC on May 17. Griffin has donated at least $39 million to the Senate Leadership Fund, a super PAC affiliated with Sen. Mitch McConnell that spends money to support Republican Senate candidates. He has also given at least $15 million to Congressional Leadership Fund, the House Republican super PAC. Griffin also gave more than a million dollars from 2015-18 to a pro-Trump super PAC called Future 45 that spent millions on ads in 2016 and 2018 attacking the Democratic presidential nominees.

In a February speech, Yang told an audience of New York City executives that he would not support efforts at the state level to raise income taxes on the wealthy or on corporations — continuing to express skepticism in an appearance with a pro-business group last month — and has proposed a one-year moratorium on small business fines. Among the primary field of eight leading Democratic candidates, Yang’s position on taxes puts him in line with rival candidates former Citigroup executive Ray McGuire and former city government veteran Kathryn Garcia, according to The City. Four other leading Democratic candidates favor raising income taxes on New Yorkers earning more than $5 million per year.

Yang has said he favored the proposal for an Amazon headquarters in Queens, which would have received $4.6 billion in subsidies according to a Nov. 2018 analysis by policy resource center Good Jobs First, and has highlighted public-private partnerships to address social problems, according to a story last month in Gotham Gazette. Earlier this week, The City reported on large donors to super PACs supporting mayoral candidates.