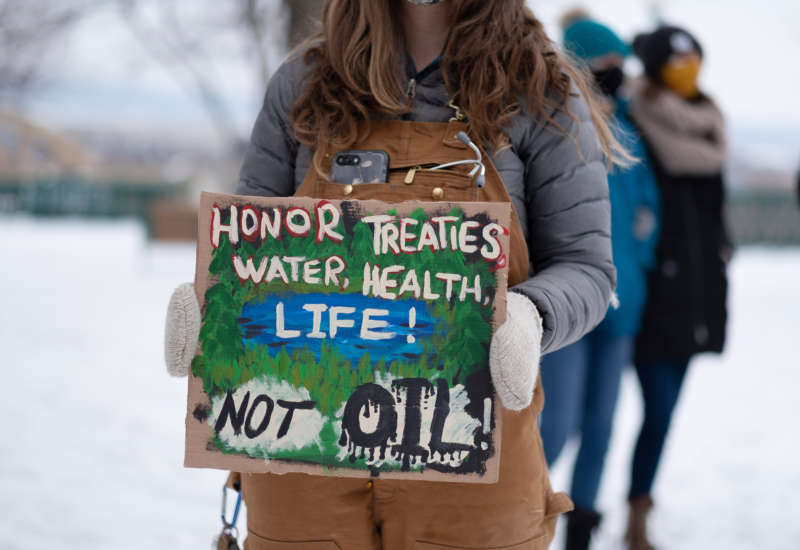 When Enbridge Line 5 was built in 1953, the notion of tribal consultation was often overlooked by states and corporations.

In those days, pipeline construction was a simple matter. The company paid the state of Michigan $2,450 for an easement for a portion of its pipeline on the lake bottom of the Straits of Mackinac.

Today, however, the state of Michigan and 12 tribes are demanding more from Enbridge than money; they want accountability, meaningful consultation and the right to stop the flow of oil through the aging pipeline.

Treaties — long-ignored and often drawn out in extended court fights — may be key to the dispute.

After winning reaffirmation of treaty rights in federal court during the 1970s and 1980s, Michigan tribes have been actively exerting and protecting their rights to hunt and fish in unpolluted ceded territory as guaranteed by the Treaty of 1836.

Now a showdown is looming over Enbridge’s continued operation of Line 5 as well as its plans to build a tunnel under the Straits of Mackinac to house a segment of the pipeline.

Enbridge officials say they have tried repeatedly to open dialogue with Michigan tribal governments and insist the company supports the United Nations Declaration on the Rights of Indigenous Peoples.

“We always strive to establish good faith engagement processes in line with the concept of free, prior and informed consent,” Enbridge spokesperson Michael Barnes wrote in an email to Indian Country Today.

“All of the tribal nations here in Michigan know that Enbridge’s efforts at consultation are disingenuous,” said Whitney Gravelle, president of the Bay Mills Indian Community.

“When they reach out to us it is only to try to convince us that what Enbridge wants is what the tribes should want; they’ve never made a good faith effort to listen to tribal nations and ask what we want.”

The company has ignored orders by Michigan Gov. Gretchen Whitmer to stop the flow of oil through the pipeline, claiming only the federal courts can enact such an order. The state of Michigan wants the matter sent to a state court.

Enbridge and the state of Michigan are engaged in court-ordered mediation talks, but no deadline has been set for the talks.

According to a report in Yahoo!Finance, retired U.S. District Judge Gerald Rosen, appointed to oversee the talks, said recently, “The parties and I are continuing discussions and we anticipate further sessions together.”

Line 3 originates in Hardisty, Ontario, and travels southeast through Minnesota to Superior, Wisconsin. Line 5 begins its 645-mile run in Superior at Enbridge’s manifold and runs through northern Wisconsin, parts of the Bad River Band of Lake Superior Chippewa reservation, east through Michigan’s Upper Peninsula and under the Straits of Mackinac, to terminate, finally, in Sarnia, Ontario.

The line carries up to 540,000 barrels per day of light crude oil and synthetic crude, as well as natural gas liquids such as propane. About four miles of the line rest underwater on the lake bottom of the Straits of Mackinac.

In 2018 and 2019, the line was struck by ship anchors in the Straits’ busy shipping lanes. Although no oil was spilled during these accidents, opponents note that Line 5 has leaked in other areas, releasing over 1 million gallons of oil in various spots in the past 50 years.

According to Line 5 critics, a spill in the Straits would be catastrophic: oil would spread over a great distance, polluting Lake Michigan, Lake Huron, and other waterways.

Critics also point to Enbridge’s 2010 Line 6B spill in which 3.3 million gallons of tar sands oil leaked into the Kalamazoo River.

Now, Enbridge wants to build a massive $500 million underground tunnel to house the underwater portions of Line 5. Some experts, however, say the final cost of the tunnel could be as much as $2 billion.

Michigan’s 12 tribes have long opposed Line 5, claiming that a spill in the Straits of Mackinac would have catastrophic impacts on the environment, water, fish and wildlife, endangering tribal members’ abilities to practice their subsistence ways of life protected under the Treaty of 1836. The straits connect Lake Michigan and Lake Huron.

Joining the Michigan tribes in signing resolutions asking for the decommissioning of Line 5 include the Bad River Band of Lake Superior Chippewa, the National Congress of the American Indian, and several other tribal coalitions.

“The unfathomable damage that Line 5 could inflict upon our treaty-protected waters, cultural resources, and critical plant and fish populations is too great to justify the pipeline’s continued operation or potential replacement,” Gravelle said.

A Way of Life

Tribes ceded over 13 million acres of land in the Treaty of 1836. The treaty, however, guaranteed tribes hunting, fishing and gathering rights on the lands and waters in perpetuity. This includes the Straits of Mackinac.

For many Native people in the region, hunting and fishing continues to be a way of life, a reliable means to feed themselves and their families. For the Bay Mills Indian Community in Brimley, Michigan, for instance, fishing generates income for 50 percent of tribal households.

“Our ancestors knew that by securing those treaty rights (to hunt, fish and gather), they were securing a way of life for us so we continue to provide for our people,” Gravelle said.

Since their treaty rights were affirmed in federal court, Michigan tribes are now involved along with the state in managing the waters of the upper Great Lakes.

The tribes are fully aware that environmental damage to the area could threaten their 1836 treaty rights.

“If there’s no healthy ecosystem and habitat for fish to survive, there is no longer any treaty right to fish,” Gravelle said.

Enbridge says it is reaching out to the tribes.

As part of its Indigenous Peoples Policy, Enbridge hires tribally owned businesses to monitor operations, perform cultural studies and assist in engagement, according to Barnes.

Bay Mills tribal leadership sent out a letter to its citizens in January informing them that they had received a letter from a contractor, Dirt Divers, seeking tribal cultural resource information surrounding and within the Straits of Mackinac.

“More often than not, throughout history, tribal resources and artifacts have been looted and stolen, only to be sold to museums for profit,” Gravelle wrote in the letter. “Bay Mills Indian Community will only proceed when the proper safety measures have been identified to protect that which was left to us by our ancestors.”

Dirt Divers was offering between $300 to $500 per hour to work on cultural surveys, Gravelle said. She asked tribal citizens in her letter to inform the tribe’s legal department if they are contacted by Dirt Divers.

According to its website, Dirt Divers is 100 percent Native owned. James Jones Jr., whose tribal affiliation is listed as Ojibwe, is described as the owner and project manager.

In an emailed response to Indian Country Today, Jones wrote, ‘My company is not hiring tribal monitors in Michigan. Not sure where you got your information.”

Dirt Divers and other companies have hired tribal citizens on the Bad River Reservation in Wisconsin and in other Native communities in Minnesota along Line 3 to work as tribal monitors, according to Enbridge.

“It’s immoral of Enbridge to corner people who are struggling financially especially since the pandemic and offer them money to give up a piece of themselves as an Indigenous person,” Gravelle said. “That amount of money means nothing to the company.”

Gravelle said that Enbridge’s motivation in collecting cultural and archaeological information may be to speed up the U.S. Army Corps of Engineers’ permitting process, which includes creating a cultural survey.

By presenting the Corps with a completed cultural survey, the company could possibly circumvent months of tribal consultation, research and archaeological findings, she said.

The legal fights continue. The Bay Mills tribe, represented by the Native American Rights Fund and Earth Justice, is challenging a permit issued to Enbridge by the Michigan Department of Environment, Great Lakes and Energy that allows the company to build the tunnel under the straits.

The Bay Mills Indian Community, Grand Traverse Band of Ottawa and Chippewa Indians, Little Traverse Bay Bands of Odawa Indians and Nottawaseppi Huron Band of Potawatomi have signed friends-of-the-court briefs supporting the state’s notice of revocation and termination of the 1953 easement for Line 5.

The four tribes have also signed friends-of-the-court briefs in support of the lawsuit by the state of Michigan and the Michigan Department of Natural Resources to move the legal action over Line 5 to state court.

The Bad River Band of Lake Superior Chippewa in Wisconsin is also suing Enbridge. In addition to demanding the company remove the existing portion of Line 5 that travels through the reservation, the tribe is seeking $45 million in damages for trespassing and restitution.

According to the tribe’s lawsuit, Enbridge wrongfully obtained profits from unauthorized use of the Band’s lands since the expiration of pipeline easements in 2013.

Enbridge offered the tribe $24 million to settle the lawsuit but tribal leaders declined.

And the Bay Mills tribe recently voted to banish Enbridge Line 5 from its ceded territories. As a sovereign nation, the tribe is asking other regulatory bodies such as the federal government to enforce the banishment order.

The Nottawaseppi Huron Band of the Potawatomi passed a resolution on May 21 designating the Straits of Mackinac as a traditional cultural property making it eligible for inclusion in the National Register of Historic Places.

Whitmer, who promised to shut down Line 5 during her 2018 campaign for governor, described the underwater portions of Line 5 as a ticking time bomb in a recent opinion piece in the Washington Post.

“I’m taking every action I can to shut them down, to protect two Great Lakes and the jobs that depend on them,” she wrote.

Whitmer described how she filed a lawsuit in November 2020 notifying Enbridge that the state of Michigan was terminating the 1953 easement and ordering the company to stop the flow of oil by May 12, 2021.

Since Enbridge has continued to run oil through the pipeline, Whitmer said the state “will make every effort to disgorge the company of all profits unjustly earned from Line 5 while trespassing on state land.”

Shutting down Line 5, however, will require adjustments. The state is taking steps to prevent price-gouging and help to change Michigan’s wholesale propane supply, Whitmer wrote. Although most of the petroleum products flowing through Line 5 go directly to Sarnia, parts of Michigan’s Upper Peninsula rely on the line for propane.

In conclusion, Whitmer wrote, “Enbridge is flat wrong in its absurd argument that Michigan, having said yes in the 1950s, cannot say no today.”

Aaron Payment, chairperson of the Sault Ste. Marie Tribe of Chippewa Indians, which is one of the 12 Michigan tribes challenging the pipeline, said the project offers little to people in the region.

“This is a Canadian company,” Payment told Indian Country Today. “Most of the oil in that pipeline doesn’t benefit Michigan. If we aren’t getting a large return on investment to the easement, what’s in it for us? Virtually nothing.”

Payment said the industry needs to move away from fossil fuels.

“We are entering a new era of clean energy; oil is a dying industry,” he said. “Why would we invest hundreds of millions of dollars to construct a tunnel that will be phased out in 10 years because we will no longer be relying on fossil fuels?

“Who will be on the hook,” he continued, “for that tunnel’s price tag?”