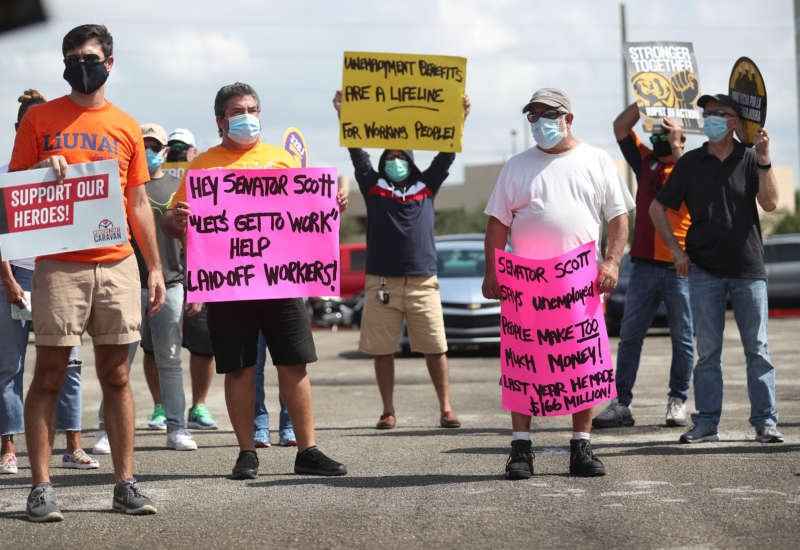 Florida’s Republican-led government announced Monday that it will soon cut off a $300-per-week federal boost to unemployment benefits, the 23rd GOP state to take such a step in recent weeks as the Biden Labor Department faces pressure to ensure the lifeline continues reaching jobless workers.

The Century Foundation, a progressive think tank, estimates that four million people across the nation will be harmed by the Republican benefit cuts, which GOP leaders have falsely claimed are necessary to push people back into the labor force.

But economists and Democratic lawmakers have argued there is no good evidence behind the narrative that enhanced jobless aid — which, in states such as Florida, is notoriously difficult to obtain — is dissuading people from seeking or accepting work. Progressive analysts and members of Congress have pointed to the myriad other factors at play, such as lack of child care, low wages, and pandemic-related health fears.

“There’s no worker shortage — just an excess of corporate greed,” tweeted Rep. Pramila Jayapal (D-Wash.), chair of the Congressional Progressive Caucus. “Florida is the 23rd state to cut the unemployment lifeline, forcing people to go without or go back to minimum wage jobs without child care. This callousness is why we need an urgent investment in the care economy.”

While Florida — unlike 19 other Republican states — is not ending its participation in two federal programs that provide unemployment aid to jobless gig workers and those who have exhausted their eligibility for state-level benefits, critics warned that halting the $300 weekly plus-up alone will have a major impact on Floridians struggling to cover basic expenses amid the ongoing economic downturn.

Observers have also stressed the damage that slashing unemployment benefits will do to the still-ailing U.S. economy. According to The Century Foundation, cutting off the aid will deprive the economy of $23.3 billion.

“Florida is the latest state to pull the rug out from under jobless workers as Republican governors nationwide sabotage the economic recovery,” Sen. Ron Wyden (D-Ore.), chair of the Senate Finance Committee, said in a statement Monday. “By design, Florida has one of the stingiest unemployment insurance systems in the country. Jobless workers will receive just $235 per week on average, and it’s impossible to make ends meet with $235 per week.”

“No one should face financial ruin for living in states run by Republicans,” added Wyden, who has called on the Biden administration to “explore all options” to prevent workers from losing the key benefits.

The Labor Department, however, has insisted it is powerless to stop the GOP cuts, claiming there is no legal way to compel states to keep distributing the benefits or to send the assistance itself.

“There is nothing we can do,” one anonymous administration official told CNN last week.

But the National Employment Law Project — a worker advocacy group — and Sen. Bernie Sanders (I-Vt.) have argued that under the terms of a coronavirus relief law enacted last March, the Biden administration has a legal obligation to continue providing the unemployment aid regardless of GOP governors’ actions.

“Workers who lack access to childcare, have lost employer-sponsored health insurance, and fear for their health and safety as we work to get every American vaccinated are entitled to these benefits,” Sanders wrote in a letter (pdf) to Labor Secretary Marty Walsh earlier this month.

This is sabotage—of their workers and voters, most obviously, but also of an economic recovery the Dems need to run on to hold Congress. https://t.co/zPMZCKiJBC

In recent interviews with media outlets, jobless workers who have relied on the emergency unemployment aid to weather the nationwide economic crisis have voiced fear that they soon won’t be able to afford adequate food, medication, rent, and other needs. The benefit cuts are set to begin taking effect next month.

“I’m definitely getting less on unemployment compared to when I was working. I’ve had to cut back a lot and just make do with what we got,” Gabrielle Mcginnis, a San Antonio resident, told the Texas Tribune last week. “We’re not starving, but our quality of life has gone down for sure. Next month, it’s gonna be really bad because my partner just got laid off from his job, too. I’m not really sure what we’re gonna do.”

As HuffPost’s Arthur Delaney reported Monday, “Florida, Ohio, Alaska, and Arizona are only dropping the $300 benefit, while the other states taking action are also canceling federal benefits for gig workers and the long-term jobless.”

“About half of the four million workers will continue receiving state benefits, which average less than $400 per week,” Delaney noted. “The other half will be left with nothing.”