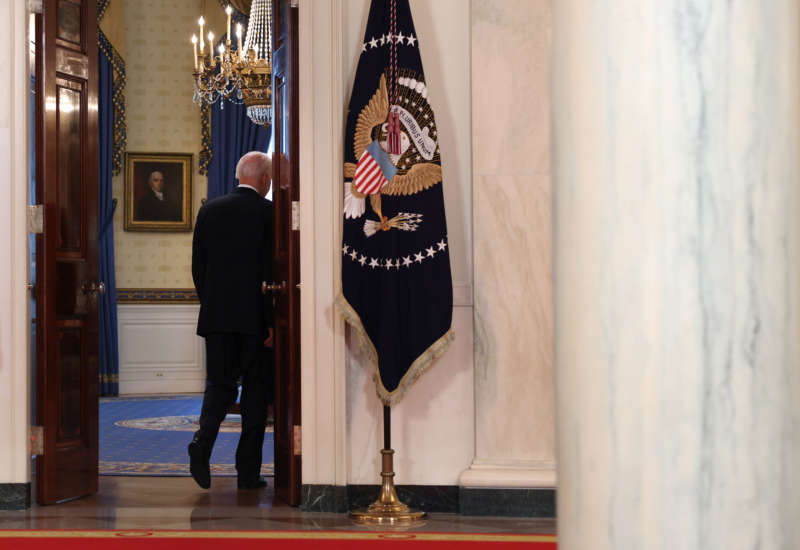 The Biden administration has reportedly granted Boeing an export license for the sale of $735 million in advanced weaponry to the Israeli government, news that came as U.S. Secretary of State Antony Blinken on Tuesday pledged $5.5 million in emergency aid to help Gaza recover from the latest Israeli bombing campaign.

Citing an unnamed congressional staffer, Alex Kane of Jewish Currents reported Tuesday that the U.S. State Department approved the export license on May 21, a necessary step in the planned delivery of Joint Direct Attack Munitions and Small Diameter Bombs to Israel.

As Kane pointed out, the “two kinds of laser-guided munitions… were reportedly used by Israel in the 11-day attack on the Gaza Strip that ended on Friday with a cease-fire between Israel and Hamas.”

The Biden administration notified Congress of the proposed $735 million sale in early May, just days before Israel launched its latest onslaught against Gaza. The nearly two-week aerial and artillery campaign — which Biden administration officials and the president himself publicly defended — killed more than 240 Palestinians, displaced tens of thousands, and further decimated Gaza’s critical civilian infrastructure.

Warning that selling additional weapons to the Israeli government would deepen U.S. complicity in war crimes, a small coalition of progressive lawmakers last week mounted a late bid to block the agreement with so-called resolutions of disapproval.

But neither the House nor Senate resolution — led by Rep. Alexandria Ocasio-Cortez (D-N.Y.) and Sen. Bernie Sanders (I-Vt.), respectively — has received a vote as the Biden administration plows ahead with the sale. The lawmakers say Congress still has a chance to stop the deal before the weapons are delivered.

Jewish Currents reported Tuesday that after being notified of the export license, Sanders “responded by placing a hold on all State Department nominees, blocking Congress from considering them for diplomatic posts.”

“After the administration committed to humanitarian aid for the rebuilding of Gaza, Sanders lifted the hold,” according to Jewish Currents.

Raed Jarrar, advocacy director of human rights group Democracy for the Arab World Now, said in a statement Tuesday that the State Department’s secretive approval of the export license “is all you need to know about its apparent anxiety at proceeding with this troubling deal while Israeli war crimes and apartheid rule continue unabated.”

“Rather than secretly approving arms sales to Israel ahead of his meeting with Israeli Prime Minister Netanyahu,” Jarrar added, “Secretary Blinken should do his due diligence and travel across Gaza to see exactly what kind of harm and destruction American weapons are causing Palestinians.”

The State Department’s move to ram this arms deal through behind closed doors is appalling. It should be alarming for any Democrat about how out of step with the party base Biden’s Israel policy will have to be if he continues to ignore Palestinian rights. https://t.co/cAGjEOmdCo

After his meeting with Netanyahu in Jerusalem on Tuesday morning, Blinken visited the occupied West Bank and vowed that the U.S. will “provide $5.5 million in immediate disaster assistance for Gaza and a little over $32 million for [the U.N. Relief and Works Agency’s] emergency humanitarian appeal.”

In remarks to the press alongside Palestinian Authority President Mahmoud Abbas, Blinken said the U.S. is committed to helping realize “the aspirations of the Palestinian people,” which “are like those of people everywhere: to live in freedom; to have their basic rights respected, including the right to choose their own leaders; to live in security; to have equal access to opportunity for themselves, for their children; to be treated with dignity.”

But human rights advocates and progressive members of Congress have stressed that selling weapons to the regime currently occupying and brutalizing the Palestinian people is at odds with any serious effort to secure lasting peace and justice in the region.

“The State Department should immediately revoke approval for this arms sale to, at minimum, allow for proper debate in Congress,” Rep. Rashida Tlaib (D-Mich.) told Jewish Currents. “Remember that these are weapons of war and destruction that will be used to kill children, bomb hospitals, homes, and schools — lives literally hang in the balance.”