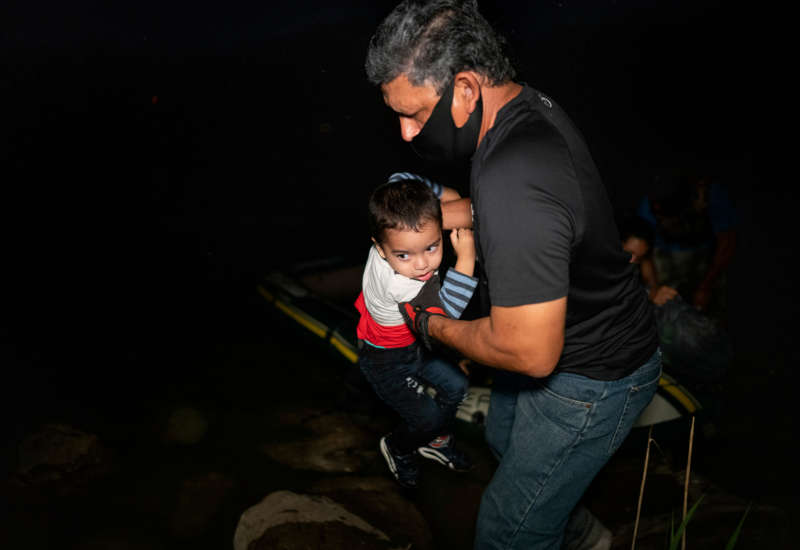 A video of Mino and Erick, two Latinx teenagers, clutching their mother in a tight embrace went viral across various news and social media platforms recently. From NBC News to The New Yorker and Democracy Now!, audiences saw the emotional intensity of Keldy Mabel Gonzáles Brebe de Zúniga finally reunited with her family after being detained in 2017, separated from her children and incarcerated for two years, and then deported in 2019 by the Trump administration’s pernicious “zero-tolerance” policy.

This is a hard video to watch. Following Gonzáles Brebe from the airport to the home of a niece, the video shows the shock and then joy expressed by her two surprised children. The brothers seem almost desperate or fearful as they cry out and cling to their mother, expressive of the traumas they have endured these past three years. Haunting the video is the violence that the U.S. government reaped upon a family who fled Honduras with documented evidence of human rights violations, evidence the asylum judge refused to recognize.

Rather than outrage, however, this video, and others like it, are being promoted as feel-good stories of President Biden delivering on his campaign promise to reunite families separated by the previous administration. The New Yorker provides the most in-depth story about the events of Gonzáles Brebe’s separation from and reunion with her children. Step-by-step, we follow her tale of detention and deportation, her return to Ciudad Juárez, Mexico, then crossing the border back to El Paso and on to Dallas before arriving in Philadelphia. Even Democracy Now!, which used this video and the story of the first four family reunifications to tell the larger story of the challenges facing over 1,000 families still separated from children, struggles to escape the feel-good narrative of the family made whole.

Part of the problem is the historical longevity and persistence of heteronormative family dramas with happy endings that pervade U.S. culture. And this is a happy ending, or at least it brings the family together, albeit without any promises of a path toward a green card. Part of the problem may be that with cutbacks in journalism and fewer investigative journalists, news media increasingly rely on press offices for visual optics. And part of the problem might be that the Trump administration set such a low bar that any actions by the new administration seem like an improvement.

Currently these images function as synecdoches for ongoing policies at the border. While such family reunifications would have been impossible under the draconian, white supremacist strictures imposed by the Immigration and Customs Enforcement (ICE) agency during the Trump era, viewing these emotional reunions as a Biden-era, humanitarian “mission accomplished” obscures the continuities of enforcement regimes, along with their attendant brutality.

These moving media tales result from the hard work of border rights organizations. Without the impact litigation endeavors and exacting research of Al Otro Lado (AOL), for example, the reunification of 18-year-old Bryan Chávez with his mother, Sandra Ortíz, covered by Democracy Now!, would not have taken place. Carol Ann Donohoe, managing attorney for AOL’s Family Reunification Project, explains that advocacy organizations, not the federal government, did the research and arranged the logistics to facilitate each of these reunions. According to the ACLU’s Lee Gelernt, Customs and Border Protection (CBP) separated approximately 5,500 children from their families during the Trump administration. About 1,000 remain separated; because of slipshod recordkeeping by the CBP, the parents of 455 children have not yet been located.

It’s important to place the separation of families in its historical and political context. The zero-tolerance policy implemented by the Trump administration was far broader than the stark brutality of tearing children from their relatives. The menacing phrase itself emanates from the notorious “broken windows” school of policing popularized by urban police departments determined to repress the freedom movements of the 1970s. Zero tolerance policies vilified and criminalized “quality of life crimes” such as graffiti and vandalism, bolstering the numbers of police apprehensions and subsequent incarcerations. As evidenced in the case of Eric Garner, apprehended for selling loose cigarettes and murdered by the New York City Police Department, this punitive school of policing tolerates no low-level crimes, creating an atmosphere in which suspect populations, usually those of color, become preemptively guilty.

Applied to asylum seekers claiming protection under both U.S. and international law, Trump’s zero tolerance policy attempted to preclude migration by terrorizing people with the threats of separation from their relatives. Led by the president, white supremacists demonized parents fleeing with their children as potential child traffickers. Practices permitted under this policy included the infamous “hieleras,” or “iceboxes,” chilled rooms where asylum seekers were held without benefit of blankets or outerwear. Even outside of these rooms the now-infamous images of cells holding toddlers showed children huddled under mylar blankets, sobbing for their families.

Border policies like zero tolerance make the erroneous and dangerous assumption that migrants fleeing extreme (often U.S.-fomented) violence in their home nations could be intimidated by carceral cruelty taking place north of the border. President Biden, in contrast, referred to his family’s history in his first press conference, explaining that, far from choosing to come to another country, most migrants are forced to leave by historical circumstances.

Advocacy organizations, not the federal government, did the research and arranged the logistics to facilitate each of these reunions.

This kind of sympathetic rhetoric, voiced frequently by immigrant rights organizations, makes it seem as though the humanitarian crisis around migration is over. After the election of 2020, many people who had been outraged by the family separation crisis breathed a sigh of relief. Surely, they thought, this outrageous cruelty would now end.

Yes and no. It depends on how you define “family separation.” While the Biden administration no longer has an explicit federal policy to separate migrant children from their relatives, the federal government currently detains about 21,000 “unaccompanied minors”; most of these young people have traveled alone from Central America, fleeing dangerous conditions, including climate devastation. In detention, they remain separated from their relatives — both sponsors in the United States and families in their nations of origin. Despite campaign promises of a moratorium on deportations during the administration’s first hundred days in office, deportations have continued, albeit at a slower rate. Including deportations at the border under the revived use of Title 42, a previously little-used clause of public health code resurrected by the Trump administration, 300,000 people have been deported since January. Most of those deported are forcibly separated from their families and communities.

Microsoft opens its Windows store up to third-party app stores