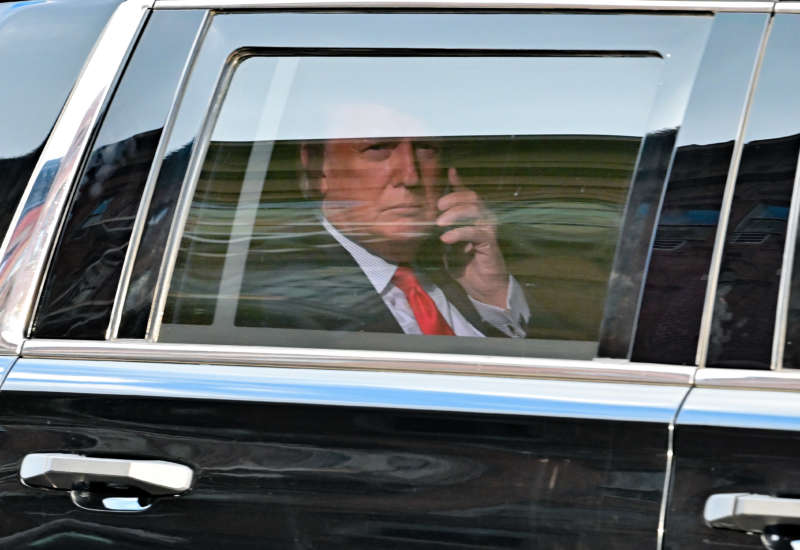 The real rumblings began last week. “The New York attorney general’s office said Tuesday that it is conducting a criminal investigation into former President Donald Trump’s business empire, expanding what had previously been a civil probe,” the Associated Press reported.

The pivot from civil to criminal meant the investigations would now include the work of New York District Attorney Cyrus Vance. Attorney General Letitia James’s office also let it be known that they were squeezing the Trump Organization’s longtime finance chief and Man Who Knows Everything, Allen Weisselberg, for as much as he will give.

Flash forward one week, and the rumblings became a low but steady roar. “Manhattan’s district attorney has convened the grand jury that is expected to decide whether to indict former president Donald Trump, other executives at his company or the business itself, should prosecutors present the panel with criminal charges,” reported The Washington Post yesterday. “The panel was convened recently and will sit three days a week for six months.”

Before we delve into the impact these announcements are having on Trump and his bag of Bedminster brats, a moment should be taken in consideration of every silly Republican campaign slob who deliberately stapled themselves to Trump’s thin orange hide. In my mind’s eye, I see their first act: blast out fundraisers as soon as word of criminal investigations and grand juries popped. Crime Of The Century! Help Us Fight These Lying Socialist Trump Haters And MAKE AMERICA GREAT AGAIN!!! They do it with everything else, and that right there is bright red meat for the wrath of the gullible base. If they have not sent one out yet based on these latest developments, feel completely confident they will soon enough.

The fundraising angle is key, the glue that holds these operatives to Trump’s Bismarck. “The GOP highlights culture-war issues to shake down rank-and-file donors while cutting taxes to please wealthy donors,” explains conservative Washington Post columnist Max Boot. “Republicans have won the presidential popular vote only once since 1988, but they can’t afford to broaden their appeal by embracing a more populist economic agenda or by toning down the divisive social messages because either move would jeopardize the flow of fundraising. The right-wing money machine has become the tail wagging the Republican elephant.”

I have to wonder whether, as the email servers dutifully frizz this sort of dreck out to all the red-hatted diehards, there has been a recent a moment of pause in the minds of at least some of these GOP operatives. Sure, the loyalists believe everything they’re told, they’re good for millions in donations, and Trump can use that money however he wants … but the walls have never seemed so close, especially in the absence of even the most gossamer presidential protections. Worse, this whole keg of dynamite may blow just as the ’22 midterms start heating up for real.

“Back in January, the Republican Party had a chance to walk away from Donald Trump — after his defeat, after Jan. 6, after his second impeachment and after he refused to attend President Biden’s inauguration,” reports NBC News. “Instead, they stuck with him, which has led to many GOP members downplaying the Capitol attack, fighting the creation of a bipartisan commission to study what happened on Jan. 6, and watching the former president continue to question the legitimacy of a contest he lost fair and square. And now they face the very real possibility of seeing their party’s de-facto leader and potential 2024 frontrunner getting indicted in the coming months.”

It must be a nervous time for those who have tethered their political existence to a man without truth, without honor, thoroughly ruthless in the pursuit of his own self-interest, and now under two very powerful legal microscopes. I sometimes imagine these loyalists as Captain Hook from Peter Pan, a bit beat up but still in the fight, while Trump is the lurking crocodile with the ticking clock in his gullet. Every time one of these investigation stories drop, Republicans hear the ticking of that clock growing ever nearer, tick-tock, tick-tock, tick-tock…

As for Trump himself, there’s nothing much to say just yet. His enemies reveled in the announcement of a grand jury, but in truth, the attorney general may as well have announced she was having some fences painted in the park. There’s an old legal saying, that a prosecutor can get a grand jury to indict a ham sandwich. The reason: Grand juries are a terrible weapon, often abused by prosecutors seeking to “make their bones” in the job.

The defendant gets no witnesses, their lawyer must largely stand mute, and that lawyer is barred from doing anything more than object to proffered evidence; despite objections, the evidence almost always still goes to the grand jury. It is a profoundly crooked table that in a just country would be removed from the process. For AG James, indicting Donald Trump ought to be as easy as falling off a log. It’s a step in the right direction, but nothing in the range of momentous.

James and Vance have carved themselves out a large chunk of history, and have taken on the responsibility not just to deliver justice, but to deliver the people from the aftermath of a lawless president.

As for the former president, well, these are not fun times. “This is a continuation of the greatest Witch Hunt in American history,” he responded by rote after the grand jury was announced. “No other President in history has had to put up with what I have had to, and on top of all that, I have done a great job for our Country, whether it’s taxes, regulations, our Military, Veterans, Space Force, our Borders, speedy creation of a great vaccine (said to be a miracle!), and protecting the Second Amendment. This is purely political, and an affront to the almost 75 million voters who supported me in the Presidential Election, and it’s being driven by highly partisan Democrat prosecutors.”

And as if all this wasn’t enough, Trump’s former attorney is getting put through his own legal paces, and the outlook is grim. Federal prosecutors seized a vast amount of material from Rudy Giuliani some days ago, more than was earlier known. These materials, according to CNN, include “messages from email and iCloud accounts they believe belong to two former Ukrainian government officials, as well as the cell phone and iPad of a pro-Trump Ukrainian businessman, according to a court document unsealed Tuesday.”

As the ancient saying goes, the wheels of justice grind slowly. Letitia James and Cyrus Vance have carved themselves out a large chunk of history, and have taken on the responsibility not just to deliver justice, but to deliver the people from the aftermath of a lawless president.

Will there be consequences for Trump’s reckless greed? Is there any law at all for the powerful?

The frustration from the flawed and ultimately failed Mueller investigation lingers. If that long-winded, manipulated and deeply edited process becomes the last word on that administration, we will have come to a cold and dreary place indeed.

Enjoy your summer as you can. Get vaccinated if you can. Wear a mask if you wish, and when you must. Gather ye rosebuds while ye may, and in the meantime, wait. Let the wheels grind, and grind.