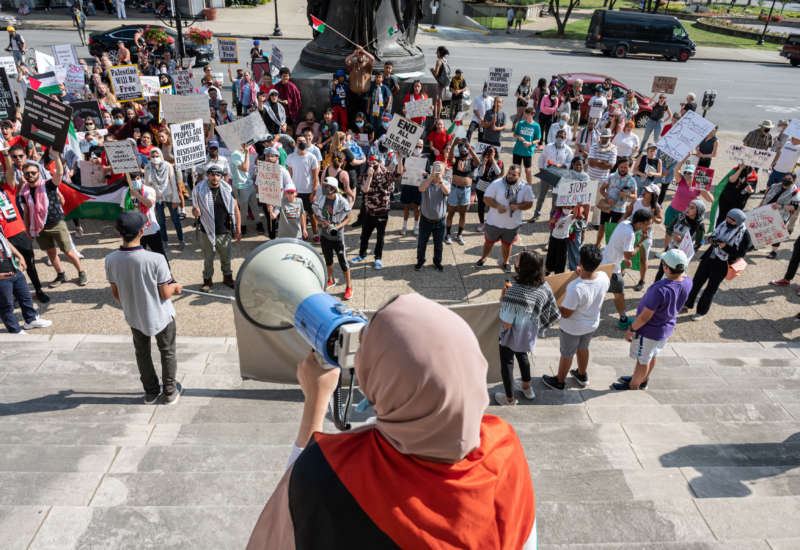 As the world bears witness to the violent dispossession of Palestinians at the hands of Israel’s apartheid regime, this very same regime is conducting a parallel project of suppression, censorship and surveillance in the United States. An extensive network of U.S.-based pro-Israel lobbying groups, working hand in hand with Israeli intelligence agencies, continue to fund multimillion-dollar campaigns to destroy Palestinian liberation struggles and ensure professional, legal and financial consequences for Americans who dare to speak out against Israeli apartheid.

College campuses have become a central battleground of the lobby’s suppression efforts. Groups like Students for Justice in Palestine (SJP) pose a major threat to long-term bipartisan support for Israel as their campaigns unsettle pro-Israel political narratives and introduce young people to the violent realities of the occupation.

While pro-Israel organizations that intervene in campus activism often try to do so under the radar, their counterinsurgency strategies and patterns are being exposed. Truthout spoke with three SJP chapters across the country about their efforts to advocate for Palestinian liberation and the challenges of organizing grassroots campaigns in opposition to a multimillion-dollar lobbying and surveillance regime.

In 2016, Al Jazeera sent an undercover journalist to intern and network within the Washington, D.C.-based Israel lobby. His reporting confirmed what many advocates for Palestine already suspected: The lobby is funding complex surveillance operations to undermine Palestine activists, particularly those on college campuses.

Jacob Baime, the executive director of the Israel on Campus Coalition (ICC), was caught on undercover footage boasting about the organization’s multimillion-dollar surveillance technologies and smear campaign tactics. The group’s strategy, he revealed, is fabricating allegations of antisemitism against activists in order to create a sense of crisis. The ICC conducts “oppositional research,” defames activists using anonymous websites and promotes these defamations using targeted Facebook promotions. Baime’s associate, Noah Pollak, admits that defamation is a major feature of the lobby’s strategy to suppress criticism of Israel, noting, “you discredit the messenger as a way of discrediting the message.”

Organizers in all of the SJP chapters Truthout spoke with emphasized the personal risks they shoulder in publicly condemning apartheid. Organizers cited these risks in their requests to participate in this article anonymously. Many activists end up with profiles on Canary Mission, a blacklisting website that publishes the private information of anti-apartheid student activists and academics. When this occurs, their names are publicly associated with allegations of antisemitism and “terrorist” affiliations. The website’s explicit aim is to prevent critics of Israel from accessing professional opportunities. Al Jazeera’s investigation revealed the Canary Mission website is operated by Baime and financed by convicted American-Israeli real-estate mogul Adam Milstein. Milstein is the founder is the Israel-American Council and sits on the board of prominent pro-Israel lobbying organizations, including the American Israel Public Affairs Committee (AIPAC), StandWithUs, Birthright Israel and the Israel on Campus Coalition.

For Palestinian students, the risk is even greater. A member of SJP at the University of Illinois Urbana-Champaign explains, “Many of us are ourselves Palestinian and of course run the additional risk of being banned from Palestine by the Israeli government when we are vocal about the atrocities in Palestine.”

Running surveillance and smear campaigns against student activists is a common feature of pro-Israel lobbying operations. Last year, SJP members at Tufts University were nonconsensually recorded and subsequently doxxed by Israel lobbyists attending a private, virtual event. Tufts SJP — which was campaigning to end a university program that sent Tufts University police officers on training trips to Israel — was targeted by pro-Israel lobbying groups with a barrage of attacks and accusations of antisemitism. Some of these organizations included StandWithUs, the Anti-Defamation League, the Louis D. Brandeis Center and a variety of pro-Israel news sources.

“Many of us are ourselves Palestinian and of course run the additional risk of being banned from Palestine by the Israeli government when we are vocal about the atrocities in Palestine.”

A member of Tufts SJP says that the organization is being targeted because of how effective it has been at changing the narrative about Palestine on campus. She explains, “We [SJP members] now have to be very careful to conceal our identities and have become adapted to dissociating our names from our work.” But by building a broad coalition of social justice organizations at Tufts, “we have been able to connect Palestinian struggles for freedom to the struggles of others working towards collective liberation.”

Coordinated media attacks play a particularly important role for the pro-Israel lobby. By accusing SJP’s student activists of antisemitism, these organizations legitimize the lobby’s assertion that advocacy for Palestinian rights on college campuses creates an unsafe learning environment for Jewish students. The lobby is leveraging this narrative to accomplish something much more consequential — to redefine civil rights legislation and anti-discrimination policies to include criticism of Israel as a form of antisemitism.

“Lawfare,” or legislative warfare, is a key aspect of pro-Israel lobby strategies. Organizations like the Brandeis Center lobby university administrators and tech companies, as well as local, state and federal legislatures, to adopt definitions of antisemitism that explicitly include critiques of Israel. These definitions ultimately punish students standing in opposition to Israeli apartheid.

In September 2020, the SJP chapter at the University of Illinois Urbana-Champaign (UIUC) successfully passed a student government resolution calling on the university to divest from companies operating in illegal West Bank settlements. The resolution garnered national outrage from pro-Israel news outlets, and the names of activists involved in the campaign were eventually added to Canary Mission’s public blacklist.

Two months later, two students in collaboration with the Brandeis Center, a pro-Israel lobbying organization based in Washington, D.C., filed an official complaint with the U.S. Department of Education alleging that the UIUC administration had failed to protect students from antisemitism.

Filing complaints with the Department of Education became a highly effective tool for Israel lobbying organizations under the Trump administration. Kenneth Marcus, the founder of the Brandeis Center — the very organization filing antisemitism complaints against universities — was nominated by President Trump to act as assistant secretary for civil rights within Betsy DeVos’s Department of Education. There, Marcus announced the department would adopt a new “working definition” of antisemitism that would include criticisms of Israel. In practical terms, Marcus paved the way for pro-Israel students and organizations to leverage the financial and legal power of the Department of Education against universities that fail to take action against Palestine advocacy on their campuses.

The Brandeis Center complaint filed against UIUC bundles instances of explicit antisemitism — like the presence of swastika graffiti on campus property — with criticism of Israel and advocacy for Palestinian liberation. A Brandeis Center lobbyist even admitted during a campaign at the University of Tennessee that the real antisemitism that Jewish students faced on the campus was from Christian evangelicals in the community trying to proselytize them, not the pro-Palestine activists at the center of the Brandeis Center’s lobbying efforts.

Filing complaints with the Department of Education became a highly effective tool for Israel lobbying organizations under the Trump administration.

The UIUC university administration, under increased legal scrutiny, ultimately released a joint statement with pro-Israel organizations. The statement expressed a commitment to combating antisemitism on campus, which would include anti-Zionism and criticism of Israel.

On May 14, 2021 — amidst the height of bombings of Gaza and one of the largest Palestinian uprisings since the intifadas — Illinois General Assembly Minority Leader Jim Durkin introduced new legislation calling upon the University of Illinois to adopt the International Holocaust Remembrance Alliance (IHRA) definition of antisemitism, which pro-Israel organizations like the Brandeis Center endorse. This definition expands conceptions of antisemitism to include criticism of Israeli government policy and challenges to Zionism. Durkin told the Jewish Insider, “this resolution, I hope, puts the university on notice that we’re watching, and we want you to resolve this in the appropriate way.”

The progression of pro-Israel lobby suppression campaigns on college campuses.

Jewish-led organizations like Jewish Voice for Peace and IfNotNow have continuously rejected the lobby’s efforts to conflate anti-Zionism with antisemitism. On the contrary, prominent Jewish activists and scholars such as Noam Chomsky and Judith Butler have argued that conflating anti-Zionism and antisemitism can itself be antisemitic: For instance, provocations by Christian Zionists and evangelicals who suggest Jews living in the United States ultimately belong in Israel. Similarly, the suggestion that critique of Israeli state violence is antisemitic necessitates the belief that Israel, and its violent colonial expansion, reflect the will of the Jewish people as a whole rather than Israeli government policy.

Regardless, the pro-Israel lobby’s coordinated campaigns to target SJP’s activism have achieved their desired effect. As a Palestinian member of SJP UIUC explains, “The media and legal scrutiny have made many students afraid to speak out,” which raises the “stakes” for pro-Palestine advocacy. Student activists are forced to reallocate their energies away from effective advocacy for Palestine and towards addressing suppression campaigns.

For Israel, the war of public opinion, particularly in the West, remains an essential feature of its national security strategy. Israel enjoys unconditional and bipartisan political support within the United States Congress, an asset leveraged to the tune of $10 million each day in military aid. It’s no surprise that the Israeli government invests enormously in preserving public support for Israel and subsequently working to neutralize organizations, groups and individuals engaged in critique of Israel’s illegal occupation and institutionalized apartheid.

Both the Trump and Biden administrations have acted in lockstep with this systemic repression campaign. In September 2020, the U.S. State Department under Trump committed to “target,” “fight” and “kill” the boycott, divestment and sanctions movement (BDS), a nonviolent economic boycott campaign modeled after a similar campaign to fight South African apartheid. The Biden administration also signaled its commitment to disenfranchising Palestine advocates when his Secretary of State Antony Blinken affirmed that the administration “enthusiastically embraces” the IHRA definition of antisemitism.

The consequences of these coordinated suppression efforts are not hypothetical. They consume the political and professional careers of many Palestine solidarity activists. Recently, amid the bombing of Gaza, Emily Wilder, a Jewish journalist with the Associated Press, was fired following a campaign from right-wing groups who condemned her years of advocacy with Students for Justice in Palestine. It’s evident that Israel’s continued investment in surveillance and defamation campaigns is likely to continue to have a chilling effect, not only on the movement for Palestinian liberation but more widely on free speech.

Israel enjoys unconditional and bipartisan political support within the United States Congress, an asset leveraged to the tune of $10 million each day in military aid.

But the enormous demonstrations taking place around the world in solidarity with Palestinian resistance to evictions in Jerusalem suggest Israel has lost the moral argument. While its lobbying power holds, many people are no longer finding Israel’s propaganda campaigns convincing. The country’s lobbying arms can no longer discredit the message — that Israel is a settler-colonial apartheid state — and instead invest in discrediting the messenger.

A member of Tufts SJP says that while they are heavily out-resourced by pro-Israel lobbying organizations, SJP campaigns are still finding success. Young people are increasingly rejecting the occupation and standing in solidarity with Palestinian freedom fighters. SJP activists can perhaps take solace in knowing that Israel’s expansion of coordinated repression is evidence of the movement’s ability to threaten the material support for colonialism, apartheid and violence that is at the heart of the Israeli occupation of Palestine.