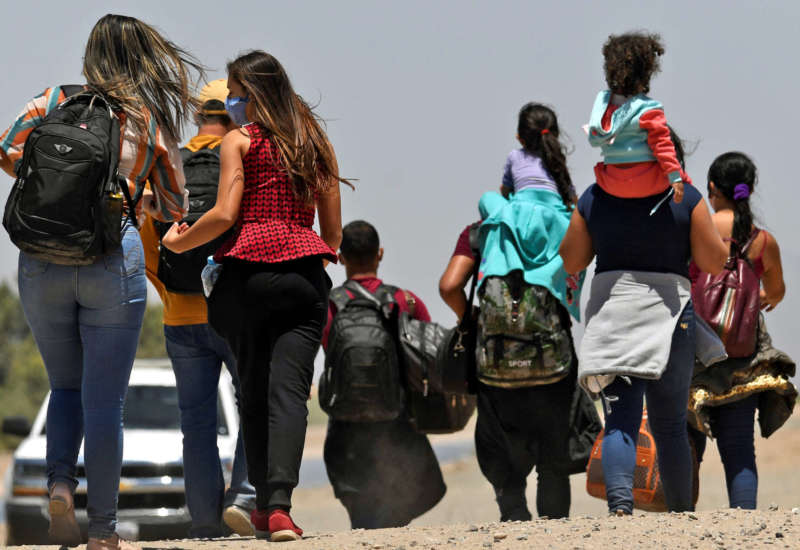 After the Biden administration on Friday announced a “dedicated docket” process that aims to “more expeditiously and fairly make decisions in immigration cases of families who arrive between ports of entry at the southwest border,” migrant rights advocates and experts expressed alarm that the changes could negatively impact asylum-seekers.

President Joe Biden campaigned on a promise to dramatically shift away from immigration policies of former President Donald Trump that were widely denounced as cruel. Human rights defenders have urged Biden to enable fair and timely asylum hearings, while avoiding the “rocket dockets” of the Obama and Trump administrations that critics say eroded due process, exacerbated backlogs, limited access to counsel, resulted in high rates of in absentia removals, and ultimately endangered lives.

Under previous administrations, “families were quickly rushed through proceedings without a fair chance to seek protection,” explained Ursela Ojeda of the Migrant Rights and Justice program at Women’s Refugee Commission (WRC) in a statement Friday. “As a result, many were ordered deported without ever having the chance to meaningfully make their case to an immigration judge.”

“While we encourage the Biden administration to continue efforts to expand access to legal orientations,” Ojeda said, “we are concerned that these families will be unnecessarily placed on electronic surveillance and subjected to a shortened timeline that risks undermining meaningful due process within the highly politicized and subjective immigration court system.”

“Although the decision suggests some flexibility so that ‘fairness will not be compromised,’” she added, “WRC is deeply concerned that the suggested time constraints, lack of guaranteed counsel, and meaningful community-based case support could set families up to fail.”

These policies risk undermining due process in asylum adjudications, while the Biden administration continues to fail to end illegal Trump policies that deny refugees U.S. protection.

“Families arriving at the border who are placed in immigration proceedings should have their cases decided in an orderly, efficient, and fair manner,” said Mayorkas. “Families who have recently arrived should not languish in a multi-year backlog; today’s announcement is an important step for both justice and border security.”

Garland said that “the mission of the Department of Justice’s immigration courts is to decide the cases that come before them promptly and fairly” and “this new program for certain newly arriving families will help achieve that critically important goal.”

However, as César Cuauhtémoc García Hernández, a law professor at Ohio State University, told The Hill:

Legal processing doesn’t happen in a vacuum so I have two concerns. One, are you going to be shortcutting anywhere that is going to have detrimental impact on the claims that people who are on this special docket receive? Because they’re not going to have enough time to find lawyers, to build up their legal cases. It just takes time to do that, and then you’re shortchanging the quality of justice meted out…

And the second part is about the people whose cases get displaced because court resources are being redistributed… Are those people just being pushed to the back of the line and having to wait interminable amounts of time before they find out what their future looks like?

Eleanor Acer, senior director for refugee protection at Human Rights First, echoed warnings that “while measures that both reduce delays for asylum-seekers and strengthen due process would be a step in the right direction, creating ‘dedicated dockets’ for families seeking asylum may amount to another round of ‘rocket dockets’ that short circuit due process and aggravate backlogs.”

“Noticeably missing from the administration’s announcement is any mention of when they will undo Trump policies that deny asylum to victims of deadly gangs and domestic violence,” Acer added. “The announcement is also glaringly silent on the Biden administration’s continued use of the Trump administration Title 42 policy that expels asylum-seekers to danger, and makes no mention of restarting asylum hearings for people who remain waiting and blocked from seeking asylum at U.S. ports of entry.”

This is not good. Lightning adjudications of asylum cases with life-or-death consequences restrict due process, limit access to counsel, and increase the risk of people being deported to the hands of their persecutors. @DHSgov @TheJusticeDept, do better.https://t.co/Dh2MbBkcfb

National Immigrant Justice Center (NIJC) executive director Mary Meg McCarthy similarly called out the current administration for forcing asylum-seeking families to go through expedited court proceedings “that will rob them of basic due process protections, including the opportunity to obtain adequate legal counsel or to fully prepare their cases,” and warned against a return to “failed” policies.

“A rocket docket that moves people too quickly through this flawed system is the opposite of justice,” said McCarthy. “Instead of moving to expedite cases without guarantee of counsel and injecting further chaos into the overburdened immigration courts, the administration must build an appointed counsel program and quickly focus its attention on urgent deficiencies in the asylum and immigration court systems.”

The Center for Gender & Refugee Studies (CGRS) at the University of California, Hastings College of the Law concurred: “Instead of reviving the failed policies of past administrations, the Biden administration should swiftly end cruel and illegal Trump-era policies and fully restore safe asylum processing at the southern border.”

The center highlighted that despite the president’s campaign promises, “families seeking asylum face enormous roadblocks to safety and justice,” pointing to the Title 42 policy and that the Biden administration “has yet to address Trump policies that have gutted protections for people escaping domestic violence and gang brutality.”

We’re deeply concerned by today’s announcement that the Biden administration will begin fast-tracking asylum cases for certain families seeking refuge. These policies sacrifice fairness in the name of speed and will endanger lives. #WelcomeWithDignityhttps://t.co/q7E1Sm2N9Q

“CGRS and our partners have set forth a clear roadmap for the Biden administration to adjudicate asylum cases in a timely manner and mitigate backlogs, all while improving fairness and protecting due process,” said the center’s legal director, Blaine Bookey. “As advocates, we’ve been down this road before. We know policies that rush asylum adjudications fail to keep families and children safe. We implore the administration not to make the mistake of putting speed above justice.”

WRC’s Ojeda encouraged the Biden administration to “immediately end the use of summary expulsions under the guise of the pandemic and rescind Trump-era asylum case law decisions that will wreak havoc for anyone who manages to access the asylum process, including those under today’s announcement.”

“Families and individuals seeking refuge cannot wait a minute longer,” she said. “WRC urges the Biden administration to implement policies that ensure all families and adults who arrive at the U.S.-Mexico border can seek asylum and have their cases be fairly decided. It is time to restart asylum and welcome with dignity, once and for all.”

We Need To Talk About The Waterloo Region Child Under Age Of 10 Who Died AFTER CONTRACTING COVID-19!

We Need To Talk About The Waterloo Region Child Under Age Of 10 Who Died AFTER CONTRACTING COVID-19!