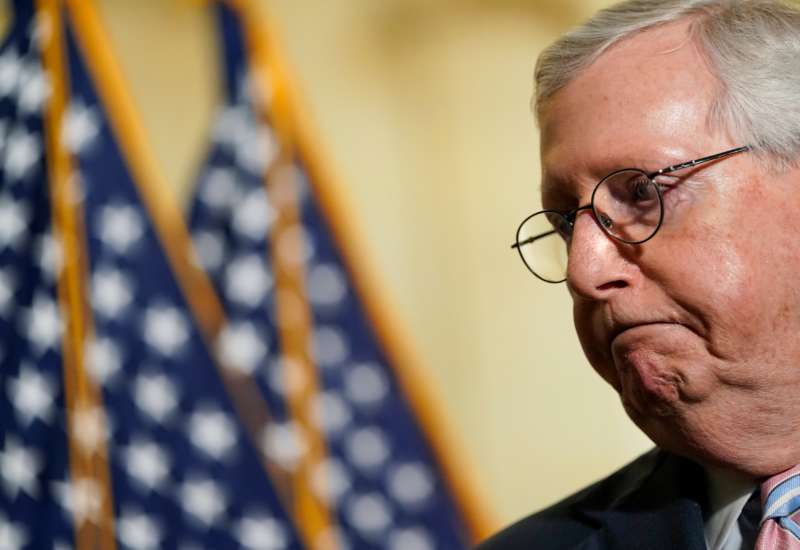 In his extraordinary early 20th-century memoir, The Education of Henry Adams, Adams, the scholar, political observer and descendant of two presidents, wrote of the inherent dysfunction and dishonesty of the U.S. Congress. He wrote of a Cabinet Secretary crying out, “You can’t use tact with a Congressman! A Congressman is a hog! You must take a stick and hit him on the snout!” Of the Senate, Adams observed that “Senators passed belief. The comic side of their egotism partly disguised its extravagance, but faction had gone so far under Andrew Johnson that at times the whole Senate seemed to catch hysterics of nervous bucking without apparent reason … they were more grotesque than ridicule could make them … But their egotism and factiousness were no laughing matter. They did permanent and terrible mischief.”

I was reminded of those lines when reading that GOP senators are, once again, sententiously threatening to refuse to lift the national debt ceiling in July unless the Biden administration agrees to sweeping cuts in spending.

Were there consistency in the GOP’s arguments, that would be one thing. But there isn’t, and there hasn’t been this past decade. Put simply, the GOP cares deeply about the debt limit when Democrats are in the White House, and cares not a whit about that limit when the commander-in-chief is a Republican.

It used to be the case that politicians of both parties tacitly agreed not to play party politics with the national debt. After all, the U.S.’s cast-iron guarantee that it won’t default on its loan obligations is what allows the country to maintain such a privileged position in global marketplaces, borrowing at far lower rates of interest than can most other countries, and allowing it to fund everything from its bloated military budget to Social Security, Medicare, Medicaid and vital infrastructure without taxing Americans at a level that would actually fully underwrite all of these programs. As soon as uncertainty is injected into that calculus, the likelihood increases that credit agencies will downgrade the country’s credit-worthiness and borrowing costs will significantly rise.

Since the Tea Party-dominated Republican Party swept to power in the House in the midterm elections of 2010, however, it’s become a central political axiom that the GOP will use the debt ceiling as a bargaining tool when dealing with Democratic presidents and their political priorities.

The GOP is now pulling the same trick against Joe Biden as its members did several times during Barack Obama’s presidency. Over a period of months in 2011, the newly minted GOP majority in the House withheld support for raising the debt ceiling, leading to a series of stop-gap spending resolutions that kept the government just about afloat, but unable to make long-term fiscal plans. They actually did shut down the government for days and weeks on end in 2013, as they tried to force negotiations over defunding the Affordable Care Act in exchange for funding government, a form of political vandalism and blackmail that would have hit the poor and the vulnerable particularly hard. And then, from 2013 through to late 2015, the GOP continued to threaten shutdowns, agreeing only to last-minute debt ceiling increases, and creating ongoing instability as they tried to leverage their power to force spending cuts.

Only in November 2015, after four years of blackmail over the debt ceiling, did Congress agree to a nearly one-and-a-half-year suspension of the ceiling, allowing for the government to be able to borrow enough money to fund its spending obligations.

During the Trump presidency, however, when the national debt soared by $7.8 trillion (in large part fueled by GOP-supported tax cuts for the wealthy, as well as large increases in military and border spending), these voices of fiscal conservatism were largely silenced.

The GOP cares deeply about the debt limit when Democrats are in the White House, and cares not a whit about that limit when the commander-in-chief is a Republican.

True, there was a lengthy and destructive government shutdown in 2018-2019, lasting 35 days. But that was triggered not by a reluctance to raise the debt ceiling, but by the GOP and Trump being unwilling to pass and sign a government spending bill that didn’t include $5 billion for Trump’s much-touted border wall. The GOP gambled that, if threatened with a government shutdown that would put on hold the government’s ability to fund vital services like food stamps, Democrats would cave and fund the wall. When that didn’t happen, and the Democrats didn’t fold in the face of this blackmail effort, eventually Trump and the GOP blinked and reopened the government.

Fast forward to 2021, however, and the GOP — in the face of Biden proposals to increase assistance to low-income families, to establish paid family leave, to expand nutritional and early education programs, and to invest in programs to tackle climate change — has re-discovered its selective outrage at the idea of the country spending beyond its means.

Sen. Rick Scott (R-Florida) wants dollar for dollar spending cuts for any increase in the debt ceiling. Sen. Ted Cruz (R-Texas), who was silent about the dangers of increasing the debt under Trump, now worries that Biden’s plans will “bankrupt” future generations.

In the GOP mindset, busting through the debt ceiling is A-OK so long as the money flows to the wealthy through tax cuts. But it’s catastrophic and illegitimate when the money borrowed is used to better the lives of the country’s poor, to build infrastructure and to tackle climate change.

In response to these political games, last week three Democratic senators — Michael Bennet (D-Colorado), Brian Schatz (D-Hawaii) and Chris Van Hollen (D-Maryland) — introduced legislation to do away with the debt ceiling entirely. If it passes, it would do an end-run around the GOP’s ability to hold the nation’s finances hostage every time they face a set of policy priorities that they don’t like.

Of course, this reform almost certainly won’t pass the Senate. But at least it will show the stakes and highlight the hypocrisy of the Republican Party.

Documentary Filmmaker Ken Burns Calls Zuckerberg An “Enemy Of The State” – Because He Doesn’t Censor Enough!

Announcing the Winners of the Keeley Schenwar Memorial Prize

WhatsApp launches its ‘View Once’ disappearing photos and videos