Republicans Are Vocally Opposed to Democracy, From Texas to Myanmar 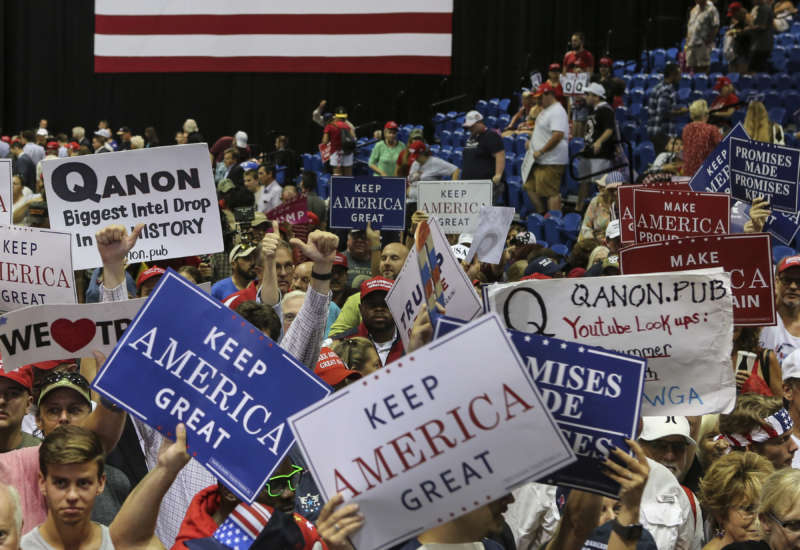 A vicious military coup d’état took place on February 1 of this year in the nation of Myanmar. Parliament was preparing to convene after a November election that saw Aung San Suu Kyi’s National League for Democracy win 83 percent of the available seats. The military refused to accept the results of the election — and started killing. More than 600 people have been murdered in the violence, and thousands have been injured. “Many of those killed have been young protesters,” reports The New York Times, “their lives ended with a single gunshot to the head.”

One attendee asked Flynn, “I want to know why what happened in Myanmar can’t happen here?” The audience cheered the question loudly. When they quieted, Flynn replied, “No reason. I mean, it should happen here. No reason.” When confronted with his own words, Flynn scrambled to claim that he didn’t actually say what he actually said into a recording camera, calling it “a boldface fabrication based on twisted reporting.” The camera did not lie, however: A former military general and high-ranking official in a Republican administration appeared to endorse the military overthrow of the United States government before a rapturously cheering Republican crowd.

Flynn is no wild-eyed outrider. A vast majority of the Republican Party has become loudly and vigorously anti-democratic in the aftermath of the Trump administration and the election that ended it. Trump himself has been going around telling people he expects to be reinstated as president by August, while giving no explanation for how this might come about. As there is no democratic mechanism for reinstalling a defeated president, he can only be speaking of one thing: another coup d’état, but here, and at the highest level.

State-level Republican officeholders are not waiting for August, but are laboring to affect their own slow-rolling coup in the upcoming elections. In more than a dozen states, brutally repressive anti-voter laws are being put in place in an attempt to make it impossible for non-Republican voters to cast a ballot. Seemingly convinced after 2020 that it is no longer possible for Republicans to actually win national elections, and stoutly incapable of making changes needed to alter that fate because Trump still commands the party, Republicans in these states have chosen to attack the underpinnings of democracy itself.

Nowhere has this been more evident than in Texas, where the Republican-controlled legislature this weekend attempted to pass the most draconian anti-voter laws in the nation. The bill, known as SB 7, is a terrifying raft of undiluted anti-democratic racism that has no business becoming law:

The legislation would make it a felony for an election official to offer a voter an unsolicited absentee ballot application. It would further restrict which people qualify to vote absentee, even though Texas already has irrationally restrictive standards. It would eliminate safeguards meant to prevent election officials from mistakenly tossing absentee ballots based on dubious signature-matching issues. It would crimp Sunday voting in a way that would make it difficult for Black churches to run “Souls to the Polls” events. It would crack down on anyone transporting more than two non-relatives to a polling place. It would ban drive-through voting, temporary voting sites and 24-hour early voting. It would make it dangerously easy for state judges to overturn election results. And it would empower partisan poll watchers, encouraging them to hassle election officials and voters.

It is well worth noting that had SB 7 passed, it would have become law the same week as a new Texas law that is on the verge of going into effect which allows people to carry concealed weapons without a permit. This means these “poll watchers” could all be packing heat as they try to intimidate and harass Democratic voters. If you think that’s a coincidence, I invite you to think again, hard.

The GOP effort was temporarily stymied by Democrats, who walked out of the chamber en masse on Sunday night, preventing a final vote. The walkout represented a significant setback for Gov. Greg Abbott, who loudly supports the measures in the bill, but not a permanent one. Abbott has announced his intention to call a special session at some point in the future, where Republicans can again bring SB 7 to a vote. In retribution, Abbott has threatened to cut the funding for the legislature itself. “No pay for those who abandon their responsibilities,” he tweeted on Monday.

A vast majority of the Republican Party has become loudly and vigorously anti-democratic in the aftermath of the Trump administration and the election that ended it.

“This is a battle over which party gets to rule,” Paul Waldman writes for The Washington Post. “But more importantly, it’s about whether we have a democracy at all, whether all citizens are allowed to vote and the system respects their decisions. That hasn’t always been true in the past. And if some people get their way, it won’t be true in the future.”

As with so much else, this crisis bends all the way back to the filibuster. The U.S. House has resoundingly passed HB 1, which offers a wide range of voter protections that would all but obviate the anti-democratic shenanigans going on in Texas and elsewhere. Because of the filibuster, HB 1 is essentially doomed in the Senate. Until a law like HB 1 is on the books, very little can be done to thwart these staggering power grabs at the state level. If the issue is not confronted soon, there will be mayhem of the highest order come November 2022 and 2024.

“Congratulations to Democrats in Texas for protecting democracy and the right to vote,” tweeted Bernie Sanders . “We must pass S. 1, the For The People Act. The future of American democracy is at stake.” S. 1 is the still-untouched Senate version of HB. 1.

At a bare minimum, these actions and the mindset behind them must serve as a klaxon warning to President Biden and congressional Democrats: The Republicans are not coming to the table with clean hands. They do not want bipartisanship, and they do not want to cut deals. They will break this nation over their knees if they believe they will be deprived of the power they think they deserve as their (largely white) birthright. That Rubicon was crossed on January 6, and in case no one noticed, they haven’t stopped since.

“If conservatives become convinced that they cannot win democratically, they will not abandon conservatism,” wrote George W. Bush speechwriter David Frum in 2018. “They will reject democracy.”

When right-wingers like Frum display that level of prognostication, it’s time to slap the panic button good and hard. End the filibuster, pass HB 1 and understand: A lot of people make a habit out of downplaying the power of the vote, but if the vote has such little power, why are Republicans trying so hard to destroy it?