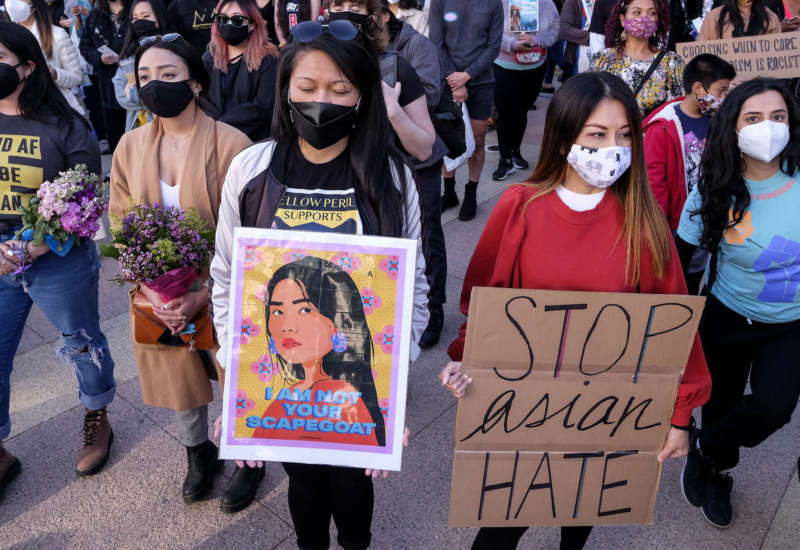 Recently, President Joe Biden signed the COVID-19 Hate Crimes Act into law. Under the new law, the Department of Justice will expedite reviews of violence related to COVID-19 that had been reported to law enforcement and help agencies establish a way to report attacks online.

As the bill was headed to the Senate for a vote in April, over 85 Asian American and LGBTQ groups released a statement opposing the legislation, arguing that it fails to address the actual causes of anti-Asian violence and ignores the violence that comes at the hands of law enforcement. In a statement released jointly by the organizations, Jason Wu, co-chair of the Gay Asian & Pacific Islander Men of New York (GAPIMNY), an organization empowering queer and trans Asian American and Pacific Islanders (AAPIs), said the groups are “calling for a redistribution of wealth and resources into things like health care and housing … because we know that at the root of the violence that we see in our communities, is … inequality.”

One cannot deny that the current spike in anti-Asian violence can be attributed to Donald Trump’s hateful anti-Asian slander. Still, the scapegoating of Asian Americans in the U.S. long precedes the blatant racism of the Trump administration, as a Democratic Party-affiliated district attorney’s targeting of a Chinese American bank in the wake of the 2008 financial crisis and the Obama administration’s targeting of an Asian whistleblower demonstrate.

Only one bank was prosecuted by the Manhattan District Attorney’s Office after the housing crash in 2008. Who was it? Lehman Brothers? Goldman Sachs? Bank of America? JPMorgan Chase? CitiGroup? No. It was Abacus Federal Savings Bank, a small family operated business started and run by the Chinese American Sung family primarily catering to Chinese Americans and the Chinese immigrant community since 1984.

I first learned of the sole prosecution in May 2017, when I was invited to a press screening of Steve James’s documentary, Abacus: Small Enough to Jail, which followed the Sung family through the four-month-long trial that started in February 2015. The trial came to a close with the jury finding the bank not guilty on all 240 counts, but not without costing the Sung family over $10 million, straining their business for several years, and inflicting a severe emotional toll on the family, which they say they still feel today.

Prior to the trial, at the May 31, 2012, press conference publicizing the decision to indict Abacus on “large-scale mortgage fraud conspiracy,” Manhattan District Attorney Cyrus Vance Jr. told the media, “Today, we are announcing the indictment of 19 individuals on charges including mortgage fraud, securities fraud and conspiracy, as well as the indictment of Abacus Federal Savings Bank…. If we have learned anything from the recent mortgage crisis, it’s that at some point, these schemes unravel and taxpayers can be left holding the bag.”

It’s unbelievable that instead of going after any of the banks that were the actual cause of the global financial crisis, the Manhattan district attorney chose to scapegoat Abacus. This is especially because in December 2009, the bank’s director, Vera Sung, learned during a scheduled mortgage closing led by employee Ken Yu, that he had asked borrowers for bribes. As a result, he was fired. The Sungs brought in a consultant to conduct an audit, during which it came to light that several other employees had also falsified mortgage application information and were also subsequently fired. With the information compiled from the audit, Abacus then contacted government regulators at the U.S. Department of the Treasury’s Office of Thrift Supervision as well as Fannie Mae to inform them of the situation.

This scenario deeply contrasts against the actual, intentional, systemic fraud carried out by the big banks such as JPMorgan Chase, which routinely committed securities fraud by regularly inflating the quality of the mortgages it sold to investors and got to avoid criminal charges by paying a $13 billion fine; or Wells Fargo, which misrepresented tens of thousands of mortgages by misstating income and providing incomplete documentation, and packaging loans into securities, which were then sold to investors who subsequently lost billions when the securities defaulted.

In the documentary, Vance says, “I think the characterizations that this was somehow a cultural bias on the office’s part: entirely misplaced and entirely wrong…. Our handling of the bank was consistent with how we would have handled the bank if we were investigating a bank that serviced the South American community or the Indian community. There was nothing different that we did or purposefully designed to treat this bank differently.”

It’s unfortunately still so typical: A powerful, well-paid white man of a certain pedigree seeming to not understand what systemic racism is (or perhaps just putting on a performative display of ignorance to try to avoid connecting his actions to racist behavior). His answer doesn’t even touch on the systemic aspect of the situation: What his decision insinuates in a larger context.

Moreover, contrary to Vance’s statement that there was “nothing different” or “purposefully designed” carried out, journalist Matt Taibbi, Abacus’s attorney and former prosecutor Kevin Puvalowski, attorney Sam Talkin (representing one of Abacus’s employees), and the Sung family’s youngest daughter, attorney Chanterelle Sung — who in a strange turn of events had actually been working in the district attorney’s office when the case was brought against her family’s bank — all give accounts that the chain-gang-style photo op of Abacus employees during their arraignment on May 31, 2012, was something none of them had ever seen before.

With the spike in anti-Asian violence over the past year, I finally came to accept that I’m simply not as safe as I used to be. I often work late into the night and regularly come home sometimes as late as 4 am. I live on a block of Manhattan I wouldn’t describe as dangerous, but in the current socio-political climate, is increasingly becoming a place where anything could happen. As I started researching possible self-defense weapons to start carrying with me, it wasn’t just former President Donald Trump’s racism that was on my mind but also the government’s scapegoating of Abacus Bank.

I’ve also thought about Stephen Kim, a Korean American expert on North Korea who had been working for the State Department in D.C. and was indicted in 2010 for sharing classified information with Fox News reporter James Rosen. In the spring of 2009, the State Department’s Bureau of Public Affairs had introduced Kim and Rosen in order for them to work together so that Rosen could put out stories.

The Persecution of Stephen Kim

On June 11, 2009, Rosen published a story based on a classified government report that reported North Korea was planning on carrying out more nuclear tests in response to new potential United Nations sanctions. According to the journalist Peter Maass, no documents ever changed hands between Kim and Rosen; they’d simply discussed the report earlier that day.

In fact, a government official told the FBI that the report Kim and Rosen had discussed that was the subject of Kim’s indictment was “a nothing burger.” Eventually, after depleting his life savings while defending himself, he was forced to enter into a plea deal in 2014 in which he pled guilty to a single felony count of disclosing national defense information to an unauthorized person and was sentenced to 13 months in prison and a year on supervised release. After his release in 2016, Kim says he was “homeless, penniless,” and decided to return to South Korea — 40 years after his parents first brought him to the U.S. for a better life.

Kim’s case contrasts starkly against what happened with David Petraeus. While he was CIA director under former President Barack Obama, Petraeus shared hundreds of classified documents as well as eight “Black Books” of notes containing classified information, such as “the identities of covert officers, war strategy, intelligence capabilities and mechanisms, diplomatic discussion, quotes and deliberative discussion from high-level National Security Council meetings, and … discussions with the president of the United States of America,” with his extramarital lover, Paula Broadwell.

In 2015, the Justice Department allowed Petraeus to enter into a plea deal in which he pleaded guilty to a misdemeanor of unauthorized removal and retention of classified material, was fined $100,000 and sentenced to two years’ probation, avoiding jail time altogether. Of course, he was able to launch a lucrative post-government career as a partner in the private equity firm KKR and as a global speaker on national security issues. In former FBI Director James Comey’s book, A Higher Loyalty: Truth, Lies, and Leadership, Comey writes, “Petraeus was treated under a double standard based on class.… A poor person, an unknown person — say a young black Baptist minister from Richmond — would be charged with a felony and sent to jail.”

The current increase in anti-Asian violence is simply a physical manifestation of a mentality that’s always existed, the systemic racism that is part of this country’s DNA and has thrived through the ages via exclusionary anti-Asian domestic policy. The recent spike in violence is only to be expected because it’s an extension of the government’s own pattern of scapegoating people of color under various administrations and regardless of party affiliation. Furthermore, systemic anti-Asian racism is built into U.S. imperialism, proof of which can be seen in the history of violent U.S. foreign policy with war defining much of the U.S.’s relationship to Asia throughout the 20th century.

Across the country, parents, students, teachers and activists have also recognized as a source of the ignorance and hatred the lack of Asian American history classes and blatant invisibility of Asian American experiences and contributions being taught in its classrooms. They are demanding such curricula to be instated, as well as calling for mental health services and other resources for AAPI students. Even in cities such as New York, in which Asian students represent 18 percent of the public school population, the lack of education has been identified, and in April, 2,500 parents banded together and sent an “Open Letter for Asian-American History Education in NYC Public Schools” to Mayor Bill de Blasio and Schools Chancellor Meisha Porter.

Proponents of anti-racism applaud the idea of incorporating critical race theory — which examines racism as systemic, rather than a product of simply individual wrongdoers, and how policies perpetuate institutional racism — into K-12 education even while there has been sharp criticism from conservatives.

President Biden’s reversal in January of a ban put in place in 2020 by Trump on federal funding for critical race theory-based diversity training is a step in the right direction. Within our control as citizens, we can put an end to our historically low turnout in local elections, and — especially amid current voter suppression tactics by conservatives — vote in electable judges and justices who align with our values and vote out those who do not. The prosecution of Abacus Bank and Stephen Kim are, of course, simply an extension of our problematic two-tiered justice system in which the wealthy and well-connected are able to buy constitutional protections while everyone else suffers harsh punishments.

Amid this spike of anti-Asian violence, it’s time to listen to the needs of the communities that are being targeted. For example, the 85+ Asian and LGBTQ organizations who oppose the law enforcement-based hate crime legislation just approved by the House demand shifting resources from law enforcement to communities, designating bias violence as a public health issue, and rejecting proposals addressing anti-Asian bias that are inherently anti-Black, anti-immigrant and harmful for marginalized communities.

The scapegoating of and violence toward us may never stop until our own government acknowledges in what ways it has helped catalyze the violence we’re currently experiencing — especially now while it can under this seemingly more logical, centrist administration. This is the time for the government to admit its steady history straight through today of governmental institutional bias. This is the time to start committing itself to truly equitable behavior from within.