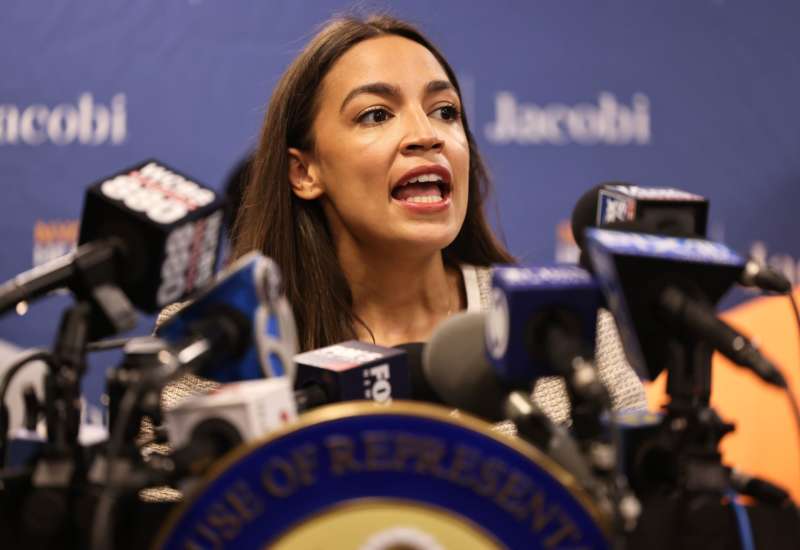 Rep. Alexandria Ocasio-Cortez (D-New York) on Tuesday questioned whether Sen. Joe Manchin’s (D-West Virginia) stated reasons for opposing voting rights legislation and filibuster abolition are as straightforward as he claims they are.

Manchin claimed in an op-ed this weekend that he is against Democrats’ marquee voting rights legislation, the For the People Act, also known as H.R.1 or S.1, because Republicans are opposed to it, and therefore, it’s not bipartisan. But Ocasio-Cortez says that she doesn’t believe that that’s the real reason behind Manchin obstructing the legislation.

“H.R.1 stands up against lobbyists and dark money. I would reckon to think that this is probably just as much a part of Joe Manchin’s calculus as anything else,” Ocasio-Cortez told MSNBC’s Chris Hayes on Tuesday. “Because when it comes to this bipartisan argument, I gotta tell you, I don’t buy it. Because Joe Manchin has voted for bills that have not been bipartisan before — look at the American Rescue Plan.”

Instead, Ocasio-Cortez suggests that Manchin may be close with the Koch network.

“You look at the Koch brothers and you look at organizations like the Heritage Foundation and conservative lobby groups that are doing a victory lap. Claiming victory over the fact that Manchin refuses to change on the filibuster,” she said. “I think these two things are very closely intertwined.”

Indeed, CNBC reported on Tuesday that Koch-affiliated groups like Americans for Prosperity and Heritage Action, the advocacy arm of the Heritage Foundation, have been praising Manchin for upholding GOP priorities like opposing climate legislation and voting rights. They have launched “grassroots” campaigns to get their supporters to contact Manchin to encourage him to continue obstructing the Democratic agenda.

Though it’s unclear if there are direct ties between these campaigns and Manchin’s opposition, Ocasio-Cortez suggested that these hyper-conservative dark money groups may be influencing him directly.

“Protecting our democracy is also about making sure we give lobbyists and dark money groups, which are funding these attacks on the right to vote, the boot,” Ocasio-Cortez said.

The For the People Act aims to greatly lessen, if not eliminate, the effects of corporate and dark money on politics by exposing dark money pipelines and creating stricter limits on and oversight of campaign finance. It is because of these provisions, which limit that influence and cash flow that politicians funded by corporate money may be opposed to the legislation, the representative said.

“Corporate money has a very, very tight grip on both parties. And I think that has to do with the calculus in this situation that people aren’t really discussing enough,” she said.

Manchin has earned the ire of Democrats and progressives in recent months for things like his staunch support of the filibuster, but especially so for his opposition to the Democrats’ voting rights bill.

Rep. Jamaal Bowman (D-New York) on Monday said that Manchin is “the new Mitch McConnell” because he is “doing everything in his power to stop democracy and stop our work for the people.”