AOC Says Senate Democrats Are Blocking Their Own Party’s Agenda 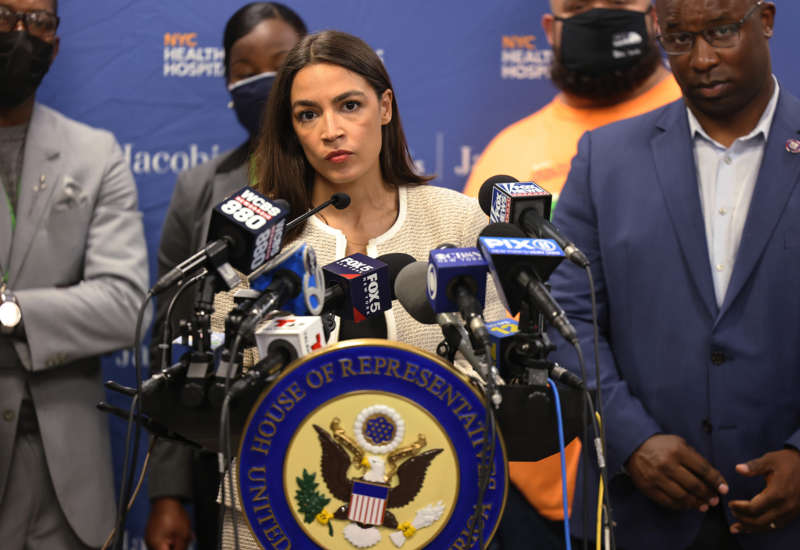 New York Congresswoman Alexandria Ocasio-Cortez gave voice Sunday to the growing frustration among progressives due to Democratic Senators who have become the clear obstructionists in enacting the bold agenda they promised U.S. voters in last year’s election.

Following a morning appearance on CNN’s “State of the Union,” Ocasio-Cortez said Democrats “have an obligation to do the most we can for working people, civil right, and the planet with the power people have entrusted us,” and stressed during her television appearance that her side of the aisle should bend no further to the demands of a minority Republican Party that has a demonstrated history of acting in bad faith while making clear that defeating progress on key issues like infrastructure, healthcare, climate action, and pro-democracy reforms is its top priority.

Asked if she would possibly vote on the bipartisan infrastructure deal unveiled last week by a small group of Democrats and Republicans in the Senate — one that features just $580 billion in new spending, compared to the Biden administration’s original $2.3 trillion package, and includes no new taxes — Ocasio-Cortez said, “I doubt it, frankly” as she highlighted the specific lack of climate action contained in the deal.

“I think one of the things that’s really important to communicate is this isn’t just $1.7 trillion,” the congresswoman said. “This is about an overall investment spread out anywhere between eight and 10 years, which is a very, very low amount of money. It’s not going to create the millions of union jobs that we need in this country, particularly to recover from the pandemic. And it’s not going to get us closer to meeting our climate goals, which are crucially important at this point in time.”

While CNN host Dana Bash pushed Ocasio-Cortez on whether she would vote for a compromised, watered-down infrastructure plan if progressives are told that’s the best it’s going to get, the New York Democrat responded, “Well, I think the thing is, is that this isn’t the best that we can get.” And then she turned her focus to Democrats like Sens. Joe Manchin of West Virginia, Kyrsten Sinema of Arizona, Jon Tester of Montana, and others in the caucus — who have refused to embrace a more bold and visionary set of policies in the name of compromise with the GOP.

“I do think that we need to talk about the elephant in the room,” said Ocasio-Cortez, “which is Senate Democrats blocking crucial items in a Democratic agenda for reasons that I don’t think hold a lot of water.”

“And for folks saying, ‘OK, where are you going to get these 50 votes?’” she continued, “I think we really need to start asking some of these Democratic senators where they plan on getting 60 votes. These 10 Republican senators that there is a theory that we’re going to get support for that out there, I think, is a claim that doesn’t really hold water, particularly when we can’t even get 10 senators to support a January 6 commission.”

We have an obligation to do the most we can for working people, civil rights, and the planet with the power people have entrusted to us.

We should lower the age for Medicare, roll back voter suppression, and create millions of jobs w/ infrastructure that combats climate change.

Ocasio-Cortez went on to say that the U.S. is now at a “fork in the road” and asked the question: “Do we settle for much less and an infrastructure package that has been largely designed by Republicans in order to get 60 votes, or can we really transform this country, create millions of union jobs, revamp our power grid, get people’s bridges fixed and schools rebuilt with 51 or 50 Democratic votes?”

“The argument that we need to make here,” she said, “is that it’s worth going it alone if we can do more for working people in this country. You know, with 50 votes, we have the potential to lower the age of Medicare eligibility, so that more people can be covered and guaranteed to their right to health care, as opposed to 60 votes, where we do very, very little, and the scope of that is defined by a Republican minority that has not been elected to lead.”

After the bipartisan group put out a rough framework of its infrastructure deal last week, progressive lawmakers like Sen. Ed Markey (D-Mass.) and Rep. Pramila Jayapal (D-Wash.) made clear they would oppose any bill that short-changed the climate crisis.

Asked Sunday about Manchin’s stance in particular — including his opposition not only to filibuster reform and a bold infrastructure package but also his vow to block The For the People Act, the Democrat’s key voting rights legislation — Ocasio-Cortez did not shy away from recent comments she made insinuating that the West Virginia Democrat’s positions are due, at least in part, to his subservience to corporate interests and deep-pocketed funders like billionaire Charles Koch and his network of dark money groups.

“I believe that we have the influence of big money that impacts not just one party, but both parties in the United States Congress,” she said. “And I do believe that that old way of politics has absolutely an influence in Joe Manchin’s thinking and the way he navigates the body.”

How to use the PS5’s M.2 SSD expandable storage