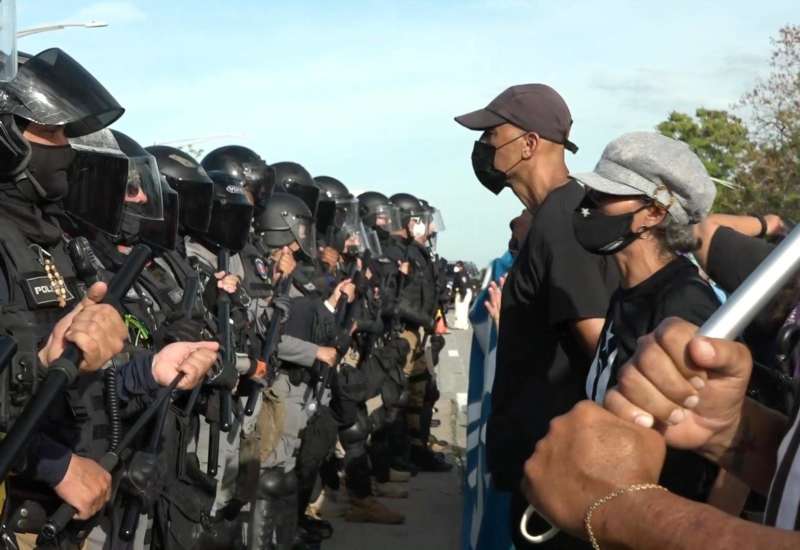 More than 1 million people in Puerto Rico were left in the dark this month after power transmission and distribution for the island was taken over by a private company under a 15-year contract. Much of Puerto Rico lost power after a fire at an electrical substation caused a massive blackout just days after the private U.S. and Canadian company LUMA Energy formally took over management of the island’s electric grid from the Puerto Rico Electric Power Authority, or PREPA, which was devastated by Hurricane Maria. Many people are still without power or facing ongoing blackouts. “This is a classic example of disaster capitalism,” says Arturo Massol-Deyá, executive director of Casa Pueblo, a community-based natural resources conservation and sustainable development group.

We end today’s show in Puerto Rico, where nearly a million people lost power last Thursday after a fire at an electrical substation in the capital San Juan. The massive blackout came just days after the private U.S. and Canadian company LUMA Energy formally took over management of the island’s electric grid from PREPA — that’s the Puerto Rico Electric Power Authority — which was devastated by Hurricane Maria. LUMA said it also faced a cyberattack shortly before a fire. Many people are still without power, facing ongoing blackouts.

The union for Puerto Rico Electric Power Authority, for PREPA, fought to block the privatization. Puerto Rico’s Fiscal Control Board, the mechanism put in place by Congress to manage its public debt, has pushed an austerity agenda that includes privatization of public assets like the electrical grid.

This is Jocelyn Velázquez with the group, in English, Promises Are Over.

AMY GOODMAN: For more, we go to Adjuntas, Puerto Rico, to speak with Arturo Massol-Deyá, who is the executive director of Casa Pueblo, House of the People, a community-based natural resources conservation and sustainable development group. He’s also a faculty member at University of Puerto Rico.

Welcome back to Democracy Now! Last time, you were in our studio; now you’re back in Puerto Rico. Talk about the significance of this blackout and the privatization of the power company.

ARTURO MASSOL-DEYÁ: Well, I have to say that the transition from the public utility to LUMA had been happening for a year. Right after they took over two weeks ago, Puerto Rico started to confront different problems at different locations in multiple municipalities. And it seems like LUMA has been incapable to fulfill their responsibilities.

From 2,000 linemen, people that the public utility used to have, it was down to 700 because of the austerity measurements before Hurricane Maria, and now it’s down to 300 in the private company. So, it’s impossible to keep the system running with that level of workforce.

JUAN GONZÁLEZ: And, Arturo Massol, I wanted to ask you, back in 2015, when this crisis — when the debt crisis in Puerto Rico finally erupted into public view, I said back then, in a presentation, that the crown jewel of Puerto Rico, as far as American capitalism was concerned, was PREPA, because at the time it was the largest publicly owned utility under any territory under the U.S. flag, and that there was going to be a privatization effort. I’m wondering if you can talk about how this developed and how now you’re in a situation where not only are they trying to privatize — or, have successfully begun to privatize the electric system, but that they’re preventing grassroots movements to develop solar energy.

ARTURO MASSOL-DEYÁ: This is a classic example of disaster capitalism. All the austerity measurements, disinvestment on the public utility caused all the problems that we confronted after Hurricane Maria, and that was used as an excuse to privatize, yes.

And what that is setting is to perpetuate the model of colonialism over Puerto Rico by building a private monopoly instead of democratizing energy generation by having people investing in energy security — people, instead of being just consumers, become producers and to participate in power generation in Puerto Rico. This is basically going the opposite direction. What they’re doing is perpetuating the same centralized energy generation setup based on fossil fuels. It’s not climate adaptation. It’s not good for economic activation. It’s good for them, for creating wealth based on Puerto Rico’s exploitation. This is going the wrong way. It’s not responsible with the climate challenge that we’re facing in this planet. And it’s not good for self-determination, for the future self-determination of Puerto Rico.

So, it’s not just a political discussion about self-determination. It’s actually the actions that need to be — that we need to take. And the U.S. is not doing their part. To do investments for the local wealth bin is basically doing federal money transfer to Puerto Rico that are going directly to U.S. companies instead of Puerto Ricans.

JUAN GONZÁLEZ: Yeah, and we only have about a minute and a half left, but I wanted to ask you — the labor unions in Puerto Rico had planned a general strike in response to the privatization of the power system. Talk about the role of the unions, especially since the electrical workers’ union had long had a history of being one of the most militant unions, but now most of its members have been laid off.

ARTURO MASSOL-DEYÁ: Yeah. Well, actually, the labor union, I think it was a great asset of the public utility, and it has been dismantled. So, that’s the weakest part of the private utility right now. The workforce is not there. They are preparing for — to confront this privatization. I think LUMA is doing the right thing — I mean, LUMA is contributing because they are not fulfilling their part. People are getting angry, desperate, and we need to take action somehow.

AMY GOODMAN: Well, we want to thank you so much, Arturo Massol, executive director of Casa Pueblo, speaking to us from Puerto Rico. We’ll continue to follow what’s happening there. Special thanks to Juan Carlos Dávila.

That does it for our show. Tomorrow we’ll be joined by The Nation publisher to talk about the Biden-Putin summit. And we’ll also talk about ranked-choice voting and the New York City mayoral race. That’s tomorrow on Democracy Now!

Before Shooting, IATSE Film Crew on “Rust” Walked Off Set to Protest Conditions

Deadly US Sanctions Are Exacerbating the Pandemic Globally

Before Shooting, IATSE Film Crew on “Rust” Walked Off Set to Protest Conditions

Deadly US Sanctions Are Exacerbating the Pandemic Globally