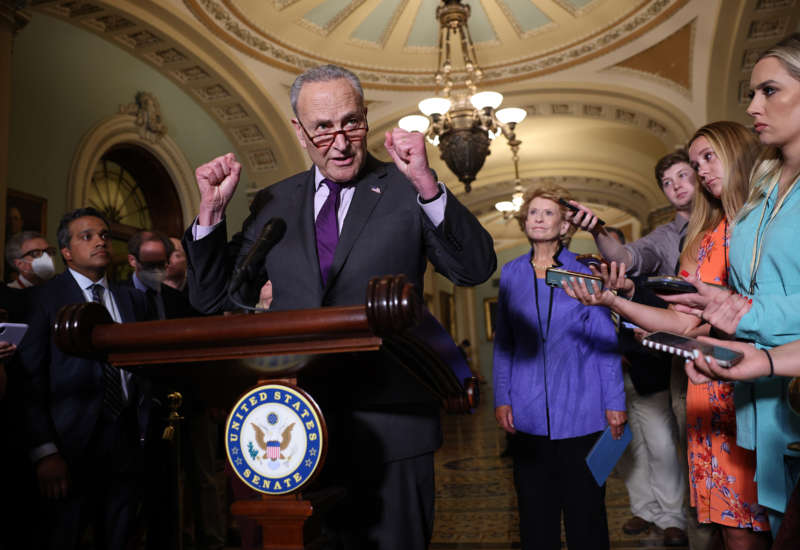 If the infrastructure bill survives the current battles and is passed through the crucible of reconciliation, thank Senate Budget Committee Chairman Bernie Sanders first. President Biden and the conservative wing of the Democratic Party have burned weeks trying to strike a deal with Republicans on infrastructure, only to have those efforts thwarted at every turn. On Monday, Sanders indicated that time had run out.

“I wouldn’t vote for it,” said Sanders on Monday of a far smaller infrastructure plan put forth by 10 Republican and Democratic senators last week. “The bottom line is there are needs facing this country. Now is the time to address those needs and it has to be paid for in a progressive way given the fact that we have massive income, wealth inequality in America.”

Many within the progressive caucus in the House and Senate have been vocal for weeks in their opposition to the half-a-loaf “compromise” bill being peddled by Joe Manchin and his Republican friends, intended to be an alternative to President Biden’s massive and historic $2.2 trillion proposal. Yet it was Sanders who came out first with a definitive “nope” that redirected the conversation away from the doom of “negotiation” and toward the reconciliation process, which has always been the only way this thing gets done.

Sanders was followed the next day by two Democratic senators — Ed Markey of Massachusetts and Jeff Merkley of Oregon — who joined Sanders in opposition. “I agree that we have many opportunities to put together a progressive tax package in order to pay for the infrastructure climate bill,” said Markey at a press conference. “All working ingredients are there. Obviously, there were tax cuts that were given back in the Trump early years. There are other areas where we can look at that will provide the revenue stream that will pay for this program.”

For Sanders, Markey and Merkley, the breaking point came when negotiations between Manchin and his GOP friends peeled many of the most vital climate-oriented elements from the bill. This was done to appease Republicans who are demanding that “no new money” be spent. That is weasel-speak for “We want to keep the massive 2017 tax cuts intact,” and would ensure that new taxes are not levied against the hyper-wealthy and corporations.

Progressives in the House are firmly on the side of Sanders, Markey and Merkley. Congressional Progressive Caucus Chair Rep. Pramila Jayapal said on Tuesday, “The reality is that the American people — Democrats, independents and Republicans — want us to go big, they want us to go bold, and they want us to get it done now because there’s real urgency.”

Mitch McConnell and his caucus will eat hot mud before granting Biden another legislative victory. Everyone is waiting for the likes of Biden and Manchin to figure that out.

All this fire is not aimed solely at Republicans, who are only acting the way their paymasters expect them to act. This chorus of “no” is also directed at the Biden White House after weeks of frustration. Mitch McConnell and his caucus will eat hot mud before granting Biden another legislative victory. Everyone is waiting for the likes of Biden and Manchin to figure that out.

Just yesterday, McConnell made the astonishing announcement that, for all intents and purposes, a Republican Senate will never allow a Democratic Supreme Court nominee to come to a vote. How anyone sees McConnell as a fair dealer after proclamations like that is an ongoing mystery, but the congressional dam has broken, and patience is at an end.

It is becoming ever clearer that negotiations have failed, because that is what they were supposed to do, and reconciliation is now the only way to pass meaningful infrastructure legislation. In progressives’ corner is an obscure parliamentary procedure called Rule 304, which allows Democrats to avoid the filibuster on budget-oriented bills, so long as they frame them as “amendments” to an existing bill. In this case, the existing bill is the American Rescue Plan. As I explained in early April:

President Biden and Schumer got the first one across the goal line — the American Rescue Plan — and going forward, so long as they affect the budget somehow and stay within parliamentary lines, vast new pieces of legislation can be passed simply by labeling them as “amendments” to the bill that’s already done.

Take Biden’s pending massive multitrillion-dollar proposal for infrastructure reform and repair, called Build Back Better (BBB). Before the advent of Rule 304, and after the passage of the American Rescue Plan, getting infrastructure through this Senate was going to be like rolling blood up a sandy hill in the rain pretty much forever.

It’s not just Build Back Better we’re talking about here. The parliamentarian has strongly suggested Democrats could move as many as six pieces of legislation under Rule 304 before the end of this Congress. What six policy initiatives are most dear to you?

The wheels are already in motion. “Senate Majority Leader Charles Schumer says he will convene a meeting with all 11 Democratic members of the Senate Budget Committee on Wednesday to begin the process for passing a budget resolution, paving the way for Democrats to pass a major infrastructure bill on a party-line vote,” reports The Hill. “Schumer said he hopes to pass the budget resolution for fiscal 2022 in July.”

The president, to his credit, appears to have received the message, sort of, maybe. According to top Biden adviser Steve Ricchetti, the White House is seeking another week to 10 days of negotiations with Republicans before abandoning hope and going it alone. “They’re giving it a week or 10 days more and that’s about it,” said House Budget Committee Chairman Rep. John Yarmuth. “And then we move along with reconciliation — for everything.”

The August recess will soon come rushing, and afterward, it will be nothing but midterm preparations for Congress. After wasting weeks on the dry socket of Republican cooperation, however, the ship appears to finally be steering the only course it really ever had to begin with. Hurry up and wait is the rule of the day.