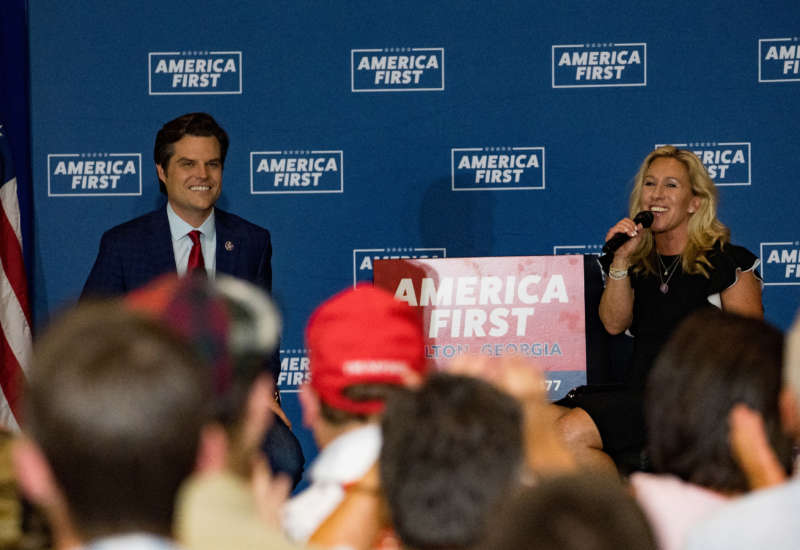 The evolution — or devolution, if you will — of the right’s January 6 narrative continues apace, but is steering toward strange waters. When it happened, it was deemed an appalling attack against the very fabric of democracy … but Donald Trump didn’t like that, because the attackers were his people, and so the story began to change. It was antifa! Black Lives Matter protesters! No, that didn’t stick. Wait, they were peaceful tourists! See how they stay within the ropes as they carry their Confederate battle flags and lengths of pipe! Ten minutes with the footage from the front stairs and hallways batted that one down.

“There was a nationwide dragnet to find [the Capitol attackers]. Many of them are still in solitary confinement tonight,” intoned Fox News host Tucker Carlson on Tuesday night. “But strangely, some of the key people who participated on January 6 have not been charged. Look at the documents; the government calls those people unindicted co-conspirators. What does that mean? Well, it means that in potentially every single case they were FBI operatives. Really? In the Capitol on January 6?”

Thus, by way of Carlson’s fake-clever loaded questions technique does the newest poisoned information pill splash down into the national bloodstream. The FBI did it, why not? This answer, unlike the others, is sure to please Trump, who despises the FBI and all within it. Blame it on them? What a hoot! Why didn’t I think of that?

It’s important to note that the FBI is certainly not blameless in the broader sense, having caused ongoing and brutal harm to many marginalized communities. However, there is absolutely no evidence that it had anything to do with the Capitol attack.

The FBI-did-it theory is the brainchild of Darren Beattie, whom you may recall was a Trump speechwriter for about 213 seconds before his deep ties to white supremacists were revealed. After being relieved of his position, Trump put Beattie “on a commission tasked with preserving sites related to the Holocaust,” according to the Independent UK. Beattie’s FBI argument, published earlier this week on his far right website Revolver News, has since been picked up and spread via social media by Representatives Marjorie Taylor Greene and Matt Gaetz.

Some fine company Tucker is keeping these days.

“Even if we set aside these reasons to disbelieve Carlson’s theory and the fact that the government isn’t supposed to cite government agents as unindicted co-conspirators, it’s still a massive leap to assume that these people were government agents,” counter-argues Aaron Blake for The Washington Post. “Carlson initially raises this as a supposedly likely possibility, but then essentially treats it as fact. Is it possible it’s right? Virtually anything is possible. There’s just no genuine reason to believe it, despite Carlson’s presentation.”

A day later, D.C. police officer Michael Fanone arrived at the Capitol to speak with the 21 Republican House members who voted “no” on giving the officers who defended the Capitol the Congressional Gold Medal. When Fanone met one of them — Rep. Andrew Clyde of Georgia — Clyde pointedly refused to shake Fanone’s hand. Clyde, you may recall, was the Congress member who recently said the riot looked like “a normal tourist visit.”

If you believe this rash of dangerous conspiracy theories is going to wind down of its own volition soon, I invite you to think again. Carlson is merely a mouthpiece for the Republican-dominating Trump faction, which believes it is in total control of the party because it is. Floating this “FBI did it” theory is perfect Trump: Bleat some aggravated nonsense to scramble the minds of your foes, deny you actually said anything because you couched it as a question and let the battery acid of your malevolent intentions do its corrosive work on the body politic.

These are the people who very nearly turned the Department of Justice into Trump’s own personal hand puppet.

“[Trump and his allies] wanted the Justice Department to explore false claims that Dominion Voting Systems machines had been manipulated to alter votes in one county in Michigan,” reports the Post. “They asked officials about the U.S. government filing a Supreme Court challenge to the results in six states that Joe Biden won. The president’s chief of staff, Mark Meadows, even shared with acting attorney general Jeffrey Rosen a link to a YouTube video that described an outlandish plot in which the election had been stolen from Trump through the use of military satellites controlled in Italy.”

Trump loyalists want us to believe the election was stolen by Italian satellites, the Capitol was sacked by FBI agents dressed in their finest MAGA gear, and all of it is controlled by a cabal of cannibal pedophiles who run Hollywood and the Democratic Party. These theories are bizarre, wild and baseless, to be sure, but they are also dangerous, grounded in white supremacy and a deep disdain for democracy.

I would like to believe this is all going to be healthy for the republic in the long run, the lancing of a boil left to swell with pus and rot for too long … but the sheer number of people who will buy into all this is staggering. Maybe they don’t believe it, but they say they do, and they vote for the ones peddling these fictions.

Soon enough, and to the great thrill of Trump, the arc of this argument will leave Republicans with little alternative but to openly embrace the Capitol attackers as brothers and patriots. It really doesn’t matter if they believe it or not. On a long enough timeline, the platform of “owning the libs” becomes potentially lethal for all involved, and for the country itself.