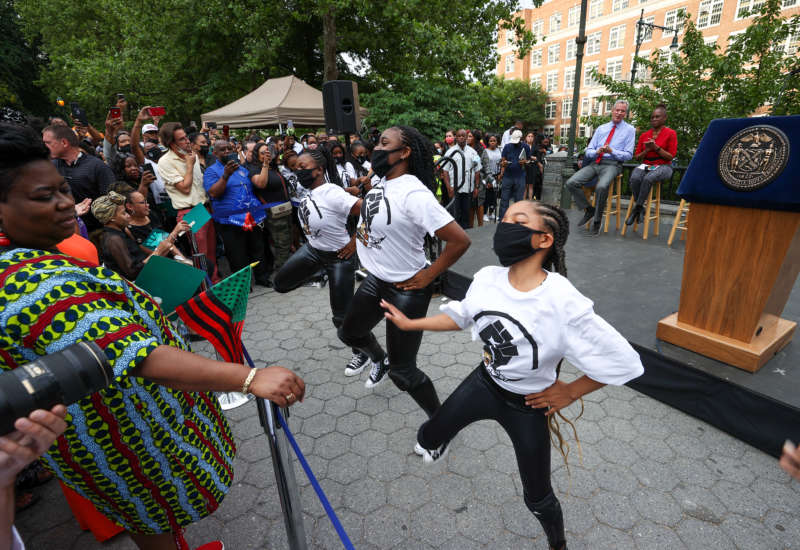 “All slaves are free,” Union troops shouted. On June 19, 1865, they read Order No. 3, written by Gen. Gordon Granger to the enslaved people in Galveston, Texas. Cheering crowds followed the soldiers. In the war’s aftermath, ex-Confederates attacked Blacks for celebrating freedom, but joy was stronger than fear. The holiday of Juneteenth began.

One hundred and fifty-six years later, Juneteenth — which has for decades been celebrated through family gatherings and grassroots political organizing — has now been designated by the U.S. Senate as the 11th federal holiday, in addition to being observed as a state holiday by 47 states.

Not all have wholeheartedly greeted this change: Some Black activists and intellectuals have argued that the federal recognition of the holiday paves the way for its cooptation by corporations and liberals who want to look progressive without actually confronting the realities of racial violence in the U.S., past and present.

Yet the increased recognition of the holiday, alongside the Tulsa Massacre remembrance, the pulling down of Confederate statues, the 1619 Project and other recent public acknowledgments of this country’s history of white supremacy, is also a cause for celebration because it reflects the growing power of the left within the “culture wars.” In the wake of the Black Lives Matter protests following the murders of George Floyd, Breonna Taylor, Tony McDade, and others, the U.S. is on the precipice of a generational tipping point where the myths upholding racist systems are crumbling.

There is a delicate tension between remaining wary of mainstream symbolic efforts like holiday recognitions, which are often pursued in place of actual policy change, while also acknowledging that winning battles within the culture war may lead to political victories. It is in that sense that the widespread recognition of Juneteenth is both a welcome change and an opportunity.

What’s Past Is Prologue

Days ago, in Chattanooga, Tennessee, Black people draped the Walnut Street Bridge with Pan-African flags to start Juneteenth. Over the past year, Oregon, Washington and New York have made it a holiday with time off for state workers. In Galveston, Texas, its birthplace, the day was declared an official anniversary with a ceremonial reading of Order No. 3.

June 19 is not just a holiday but a political barometer. It is an early form of Black resistance to the U.S.’s self-serving mythology as the “home of the free, and land of the brave.”

The drive to recognize Juneteenth in 2021 comes after last year’s protests, the largest civil rights demonstrations in U.S. history, with 15 million to 26 million people calling for an end to racism. The rising tide of protest filled cities like New York, London and Chicago, as well as smaller counties, with organizers calling to defund police and defend Black lives. Activists pulled down Confederate statutes, and in doing so they challenged the white supremacy that is the U.S.’s cultural foundation.

June 19 is not just a holiday but a political barometer. It is an early form of Black resistance to the U.S.’s self-serving mythology as the “home of the free, and land of the brave.” To survive racism, African Americans developed a hardened practical view of the hypocrisy at the heart of the nation. In 1852, Frederick Douglass orated his What to the Slave is the 4th of July?, where he said, “your celebration is a sham; your boasted liberty, an unholy license; your national greatness, swelling vanity.” He voiced a Black view of America as a prison, contrasted with the European colonial image of a promised land. President Lincoln signed the Emancipation Proclamation in 1862 but it took three more years of war to bring an official end to slavery (that institution continued in other forms, from convict leasing to today’s prison-industrial complex). After Granger’s troops marched into Galveston, Texas, Black citizens made it a point to precede the empty celebration of July 4 with the deeper one of Juneteenth.

Naming your own holiday to commemorate your freedom is creating a culture to resist being erased. In a collective effort, we in the Black community have fought to honor this history. Historian Annette Gordon-Reed said in an NPR interview about her book On Juneteenth, “There are stories about people celebrating what they called the Jubilee or Emancipation Day before it … became Juneteenth, and they were whipped. They were whipped for doing it. They were punished for doing it.” Eventually, it became a day for large, boisterous family gatherings in Texas with fireworks and grills. When those Texas families migrated, they took the holiday with them and it spread.

Black people have not only had to fight racist whites to celebrate Juneteenth — we’ve also had to fight the racism in ourselves. The holiday hit a low point of observation in part because of the desire to integrate. In the 2010 book, The Encyclopedia of African American Popular Culture, author Gladys L. Knight wrote, “Upwardly mobile blacks … were ashamed of their slave past and aspired to assimilate into mainstream culture.” The further upward in class they climbed, the more they saw themselves through the “white gaze.” The clearest formulization of this identity crisis was made by scholar W.E.B. Du Bois in his 1903 The Souls of Black Folk, where he wrote, “It is a peculiar sensation, this double-consciousness, this sense of always looking at one’s self through the eyes of others.” The white-washing of one’s self that led to a nadir of the holiday’s celebration was diagnosed by Langston Hughes in his 1926 essay, The Negro Artist and the Racial Mountain where he decried this “urge within the race toward whiteness.”

After last year’s protests, [Juneteenth] symbolizes an era in which the colonial myths of the United States are beginning to be upended, and a reckoning has begun.

Juneteenth has, in some ways, functioned as a barometer of the Black imagination. During conservative years, it decreased in intensity. During the Civil Rights and Black Power Era, the holiday was a mirror reflecting back across time to measure how real freedom was in America. After last year’s protests, it symbolizes an era in which the colonial myths of the United States are beginning to be upended, and a reckoning has begun.

Yet fighting this reckoning are the many schools that don’t teach about Juneteenth or any major Black holidays, and that downplay the violence of slavery. Above them are Republicans who try to ban Ethnic Studies or Critical Race Theory from colleges. They want to sweep the blood of U.S. history under the flag.

How Does It Feel to Be a Problem?

“How does it feel to be a problem?” wrote Du Bois about how he was approached as a Black man. Now the question can be reversed, and asked to white conservatives. For many of us, the rise of Juneteenth comes alongside a deep shift in the nation’s image. Many more Americans have come to realize that we don’t live in a “City on a Hill” or a “Land of Opportunity.” The vital work of grassroots activists has stripped some of the nostalgic glow for the United States’s brutal past, and that in itself is a partial victory in the culture war.

A culture war is a struggle over the identity of a nation by groups with a passionate, vested interest in seeing themselves at the center. Since Christopher Columbus and other colonizers initiated a brutal genocide on this continent, Europeans have colonized not only the land but how it is imagined. Whether it is the idea of Manifest Destiny or the American Dream, they put themselves at the center as heroic founders and the multitudes of people of color, workers, women, sexual and religious minorities, and disabled people at the margins, attempting to render us invisible outside of stereotypes and caricatures.

The racial, class and gender tension that rip at the nation’s fabric can only be mended when the violence done under the guise of patriotism and white supremacy is no longer hidden by nostalgic myths.

The battles to retake culture have often taken the form of protests during capitalist crises that changed popular sentiment — and also the academy. The Progressive Era led to historian Charles Beard’s 1913 book An Economic Interpretation of the Constitution of the United States that highlighted how the rich sabotaged democracy. During the Great Migration and the Great Depression, Du Bois published in 1935 his classic Black Reconstruction to disprove the Dunning School version of Reconstruction as a corrupt failure. The 1960s Civil Rights and Black Power movements forced colleges to create Black Studies departments. In 1980, in the midst of depression and oil shock, Howard Zinn published The People’s History of the United States, which replaced the “Great Man” version of history with the reality of the many buried under the “City on a Hill.”

Rising with racial diversity, rising with each protest, rising with each victory is a more accurate vision of the United States. First and foremost, we must acknowledge the vision put forth by grassroots organizers: a vision of life beyond white supremacy, and, relatedly, beyond police, prisons, borders and colonialism. Thanks to ongoing pressure from movements, we are also seeing more mainstream efforts like The New York Times’s 1619 Project, which although fairly criticized has repositioned race as central to the U.S.’s founding in school curriculums. In pop culture, we see it in films from Django to 12 Years a Slave, the new Watchmen series with its racial commentary to the TV series Pose about transgender youth of color in New York, to the success of Jordan Peele’s Black cast horror suspense films. We see it in the panic around so-called “cancel culture,” in which people like white libertarian Joe Rogan say they fear “woke culture” will lead to “straight white men not being allowed to talk.” One response to this panic was actor LeVar Burton, famous for Roots, Star Trek: The Next Generation and Reading Rainbow, saying to Meghan McCain on The View, “I think we have a consequence culture, and that consequences are finally encompassing everybody in this society, whereas they haven’t been ever in this country.”

Again and again, one simple fact stands out. Progressives are winning culture wars because their narrative gives people the right to be visible. The victories are seen in Pride Month, changing Columbus Day to Indigenous Peoples’ Day, and yes, Juneteenth.

Martin Luther King Jr. said, “We are caught in an inescapable network of mutuality, tied in a single garment of destiny.” The racial, class and gender tension that rip at the nation’s fabric can only be mended when the violence done under the guise of patriotism and white supremacy is no longer hidden by nostalgic myths.

The millions of protesters, mainly Millennials and members of Gen Z, who powered last year’s uprisings are dismantling the ideology that destroyed lives. It is now possible to imagine the end of the drug war, mass incarceration and austerity politics. Policy makers’ long-time resistance to even liberal reforms — not to mention democratic socialism — has long been bound up with racist fearmongering. For a whole generation of American youth, that racial appeal falls flat. For them, Black Lives Matter. On Juneteenth, we celebrate Black freedom, knowing it’s not fully realized but that we are drawing closer and closer. So close, you can hear the people cheering.

Vergecast: this quarter’s earnings for Apple, Samsung, Google, and Microsoft