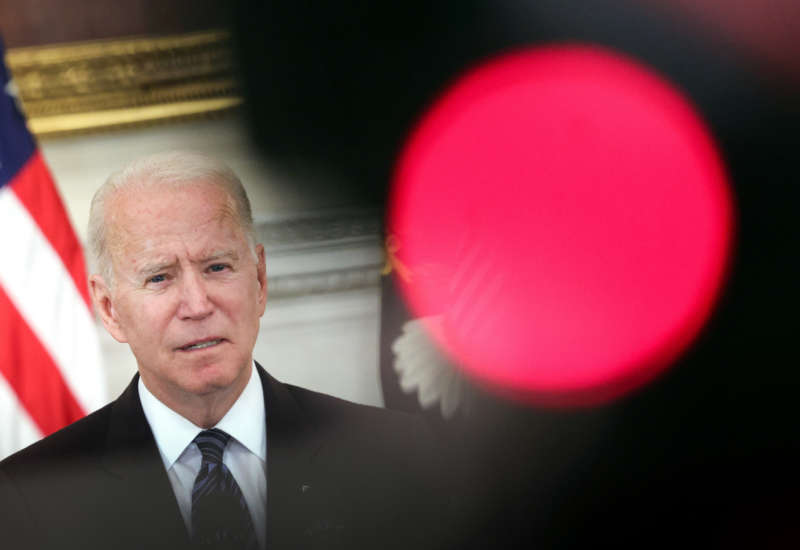 Racial justice advocates say President Biden’s new plan for addressing crime and gun violence could encourage cities to divert pandemic relief funding away from communities and into the police departments that terrorize them. Moreover, they say, the plan does little to reverse decades of racist policies that both target and abandon Black, Indigenous and people of color, making their communities more vulnerable to violence.

As activists around the country call for a defunding of police, the White House announced Wednesday it will allow cities to pull from $350 billion in federal pandemic relief funds to both hire more police and increase resources for community-based violence prevention programs. Critics say that building up police departments won’t stop a spike in gun violence that some cities experienced as the pandemic put unprecedented pressure on communities that were already economically vulnerable. Instead, they say, increasing police will further endanger marginalized communities.

In remarks Wednesday, Biden said his plan would address the “root causes” of violent crime, which include, according to the president, illegal gun sales and joblessness among teenagers living in what he called “tough” neighborhoods. However, racial justice advocates and civil rights groups say the root causes of violence run much deeper, and the president’s call for more cops on streets ignores the violence caused by police and the criminal legal system, especially in low-income communities and communities of color.

“We actually have to address the public policy failings that have existed year after year for decades,” said Amara Enyia, a research and policy strategist for the Movement for Black Lives. “And until we do that, we’re not going to see crime reducing at all.”

Biden’s announcement was intended to address what he called an “epidemic of gun violence and other violent crime.” Conservatives in the media have been talking of a national “crime wave,” but the data on policing and crime is much more complex and varies across the country. Nationally, crime rates have steadily fallen since the early 1990s. Meanwhile, rates of police-perpetrated violence remain startingly high, with more than 400,000 people sent to the emergency room after being beaten or harmed by police officers or security guards since 2015, a figure that is probably an undercount, according to the Marshall Project.

Enyia lives in Chicago, a city where the murder rate increased during the pandemic. Enyia said Chicago spent $281 million of its first round of pandemic relief funding on police, on top the nearly $1.7 billion allocated by the city in 2021. This massive investment in police and police infrastructure has not prevented gun violence. Enyia said that should tell us that the solution to violence is not policing.

“The solutions have never been tailored to the actual root of the problem of violence,” Enyia said in an interview. “And when we assess the root causes of violence, it is the disinvestment in many Chicago communities and similarly situated communities around the country over decades. That disinvestment results in a lack of economic vitality in these communities, lack of jobs, lack of housing, lack of access to healthcare and mental health care.”

“Moments like these have fueled our nation’s mass incarceration crisis.”

After a year of intense protests against the police killings of unarmed Black people that led to widespread calls to defund and abolish the police — and the backlash from President Trump and the right — Biden is under pressure from both sides of the political spectrum. Republicans have consistently attempted to tie Democrats to the “defund the police” slogan, even as defund organizers point out that Biden is actually in favor of increasing police budgets. GOP officials also blame Democrats and criminal legal reforms for the uptick in gun violence in some cities, without evidence.

Meanwhile, racial justice advocates are pointing out that Biden’s move to permit city governments to use pandemic relief funds to hire more cops and buy surveillance equipment may deeply harm Black communities and other communities of color.

“History has demonstrated that the hiring of more police officers leads to more enforcement of low-level offenses in communities of color,” said Udi Ofer, director of the American Civil Liberties Union’s Justice Division, in a statement responding to Biden’s plan.

In addition to calling for more police, Biden also called on cities to use pandemic relief funds to hire counselors, school nurses and social workers, and fund violence intervention groups that are typically made up of community members, an alternative to policing that has proven effective at preventing gun violence — including shootings by police. Biden also hyped jobs and training for formerly incarcerated people, as well as summer jobs programs for teenagers, which have helped reduce violence in cities such as Boston by giving young people opportunities to make money and stay busy while school is out.

Enyia points out that Biden isn’t delineating how much money should be invested in community supports versus police, leaving the door open for overwhelming police spending. Biden’s plan was issued as a guidance for cities receiving federal pandemic relief funds but includes no specific restrictions on how city governments spend the money.

“This federal push … it feels like an attempt to split the baby, you know, that the solutions lie in investments in communities, but yet [Biden doesn’t] want to perhaps offend or move away from law enforcement,” Enyia said. “But they are not telling cities that they have to split the money evenly between the police department and these kinds of community resources. A city could spend all of the money on policing if it so chose.”

“That’s extremely concerning, because again, we saw, for example, in Chicago where the bulk of the resources that were supposed to help Chicago struggling through COVID actually instead went to policing,” Enyia said. “And if you actually look at the statistics, when we look at the crime statistics, [they] could possibly be attributed to just the ravages of the pandemic on this country, in terms of the economic distress, the social and mental distress, the precarity of folks on the verge of eviction.”

The Biden administration also pledged to crack down on illegal gun sales, including gun dealers who sell guns to people without performing background checks. The Justice Department is launching five anti-gun trafficking “strike forces” across multiple regions of the country to track down illegal guns and the people who sell them. Biden has long cast himself as champion of gun control, but without gun control legislation from Congress, Biden may focus on bolstering the enforcement of existing gun laws.

While Ofer applauded Biden for encouraging investment in community programs and violence prevention, he said past national efforts by law enforcement to crack down on gun and drug trafficking were “implemented in an overbroad manner that needlessly criminalizes low-income communities.” Joint task forces like the one launched by the Biden administration are notorious for charging defendants in federal court (rather than state or local courts) where they can pursue higher sentences, including mandatory minimum sentences that fill federal prisons.

“Moments like these have fueled our nation’s mass incarceration crisis,” Ofer said. “This time around, we should be guided by evidence of what works, and not let the politics of fear drive our nation’s criminal justice policies.”

Enyia said there is no shortage of efforts to crack down on illegal gun sales and trafficking, but ultimately the issue is “going to come down to the circumstances that create a mindset for which an individual will feel that they need to have a gun or obtain a gun in the first place.”

Enyia said community violence prevention groups like those touted by Biden do crucial work, but we should be working to make their jobs easier. If you ask people involved with these groups, Enyia said, they will tell you that the problem of violence will not be solved until material conditions improve in neighborhoods that are most affected. Leaders must confront the public policies that have failed these neighborhoods for decades, leaving people without access to quality housing, food, jobs and medical care, she said.

“And until we do that, we’re not going to see crime reducing at all,” Enya said. “And so, when people talk about ‘defund the police,’ they’re speaking specifically to the fact that our priorities have been supporting and expanding the carceral state and policing, instead of actually addressing the issues in those communities that are caused by intentional public policies that have had a devastating impact on the people who live here.”