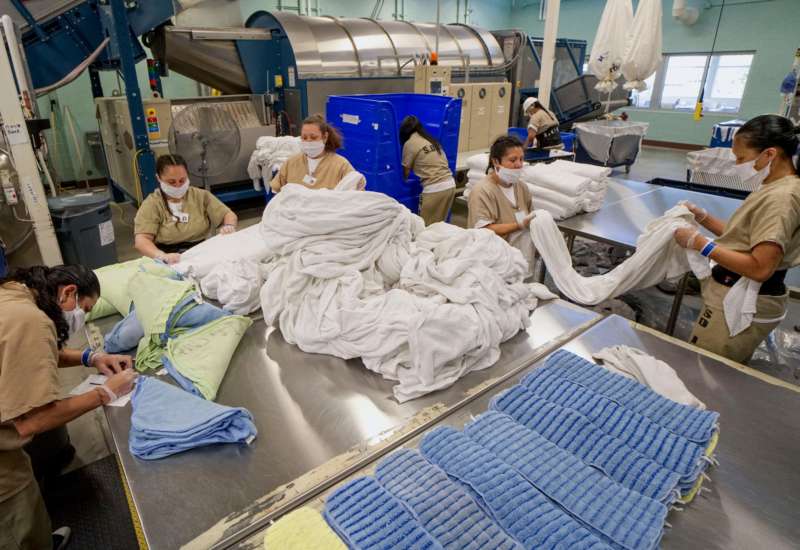 While the 13th Amendment abolished chattel slavery, an often ignored clause still allows for slavery and involuntary servitude as “punishment for a crime.” This “slavery clause” is now the target of #EndTheException, a new campaign launched this year on Juneteenth weekend. #EndTheException is pushing for the passage of the Abolition Amendment, a joint resolution cosponsored by Sen. Jeff Merkley and Rep. Nikema Williams, which would strike the slavery clause from the 13th Amendment making it so that “neither slavery nor involuntary servitude may be imposed as a punishment for a crime.”

On Saturday, June 19, as communities across the country celebrated Juneteenth — a long celebrated holiday by Black Americans, particularly Black Texans — Merkley and Williams joined advocates from groups including WorthRises, LatinoJustice PRLDF, JustLeadershipUSA, and the Anti-Recidivism Coalition for an online discussion about the #EndTheException campaign and to explain how the promise of freedom has yet to be unfulfilled.

The average incarcerated worker earns 86 cents per hour, and yet in five states — Alabama, Arkansas, Georgia, Mississippi, and Texas — laborers inside earn nothing. Jorge Renaud, the national criminal justice director for LatinoJustice PRLDF, was incarcerated in Texas for 27 years. For 13 years, he experienced not just the painful labor of fieldwork — chopping trees and picking cotton, sorghum, and corn — but also retaliation when refusing to work.

“[It was] two years into my last sentence — I had a 60-year sentence,” Renaud said, “I thought I was going to die in prison and I drew a line. I said, ‘There are some things I’m not going to do for you all. I don’t care what you do to me.’ So I’m working out in the fields and I threw my aggy [grubbing hoe] up in the air and I was lucky they didn’t shoot me. They said, ‘You’re not going to work?’ and I said, ‘I’m not going out in the fields for y’all,’ and they put me in solitary for a couple of years.”

Renaud spoke of how prisons force incarcerated laborers to work any type of job assigned to them, and how protesting such work will inevitably lead to being assigned “more brutal jobs, more degrading jobs until you finally end up in solitary confinement. [Then] you don’t have to work but now you’re in there with nothing: no privileges, no commissary, no visitation, no nothing.”

The inclusion of the “slavery clause” made the passage of restrictions targeting Black people like the Black Codes possible as well as convict leasing of the late 19th century. It’s important not to erase the unique horrors faced by those who were enslaved and those who are currently or formerly incarcerated, but the fact is that the “slavery clause” helped enable the current system of prison labor where incarcerated people are forced to work for both the state as well as private companies for little to no pay.

Recent years have brought more attention to how private companies make up a small portion of those who benefit from incarcerated labor — only roughly 1% of incarcerated laborers are employed by private companies and about 6% of imprisoned workers are employed by state agencies who task them with jobs including manufacturing furniture for public colleges, making hand sanitizer, or washing scrubs and linens for state hospitals. In truth, the overwhelming majority of work performed by incarcerated laborers involves facility maintenance — a fact that panelist Deanna Hoskins, president and CEO of JustLeadership USA, came to understand years after her own incarceration in Ohio where she was not paid at all for her labor.

It wasn’t until Hoskins went to work for a Department of Corrections that she understood whose labor was actually keeping the facilities operating. The state was effectively undercutting their employee budget by having incarcerated individuals staff services like laundry, landscaping, working in the kitchen, custodial work, janitorial work, gardening, and so on.

“Even down to state departments actually used women’s prisons as their call centers to alleviate them from having to pay for that,” Hoskins said.

In Texas, Renaud pointed out, the type of work provided to those inside also varies tremendously based on race. Black and Latinx people are often assigned to these more custodial positions while their white peers are more likely to get jobs that enable them to acquire more technical skills.

“I once took a tour about five years ago,” Renaud said. “I took some legislators down to a prison in TDCJ where they [offered] computer refurbishing. They had some 47 people in there [working on computers] and there were two Black individuals and like three Latinos. That job at least could give you some technical expertise [so that] when you got out there would be a prestigious job or maybe a well-paid job, [but it] was reserved still for white people.”

The phenomenon reminded Renaud of the separation between enslaved people working in the house versus the field. It also serves as a reminder that in addition to the loss of wages and the strain that places on families who are now tasked with financially supporting their incarcerated loved ones, prison labor also fails to provide jobs that can translate into careers upon release.

Even jobs that could lead to fruitful careers, such as positions in California’s Conservation Camps where incarcerated people fight fires alongside local and state fire departments, are rife with inequity. In addition to not earning anything close to the wages enjoyed by their free world counterparts, incarcerated firefighters are often barred from continuing this work upon their release because of restrictions in getting their license due to their past conviction. For Michael Mendoza, director of national advocacy for the Anti-Recidivism Coalition, this profoundly stifles people’s ability to reshape their lives.

“When we talk about jobs in prison,” Mendoza said, “We’re talking about jobs that don’t lead to actual careers because of these exceptions and these laws that we desperately need to change.”

In addition to advocating for The Abolition Amendment at the federal level, movements to end prison slavery are being made on the state level as well. Thus far, Colorado, Utah, and Nebraska have abolished prison slavery in their state constitutions and groups like the Abolish Slavery National Network are working with grassroots organizers in 24 other states to help works towards the same goal.

Writers, historians, and activists have warned about the dangers of overconflating chattel slavery and mass incarceration — arguing that doing so ignores the unique horrors faced by those who were enslaved and those who are currently or formerly incarcerated — but the “slavery clause” is an important tie between the two oppressive systems that must be addressed. As the country winds down Juneteenth celebrations for the year—the first in which the day was commemorated as a federal holiday — #EndTheException organizers are tasking the public with not just memorializing the past but also considering our responsibility in the present to create a more free future.

“This fight is deeply important to the soul of our nation,” said Kamau Allen, lead organizer with the Abolish Slavery National Network. “We find ourselves at a crossroads to decide who we want to be as a society moving forward. We must win and we can win because we’ve done this before.”

Prism is a BIPOC-led nonprofit news outlet that centers the people, places and issues currently underreported by national media.